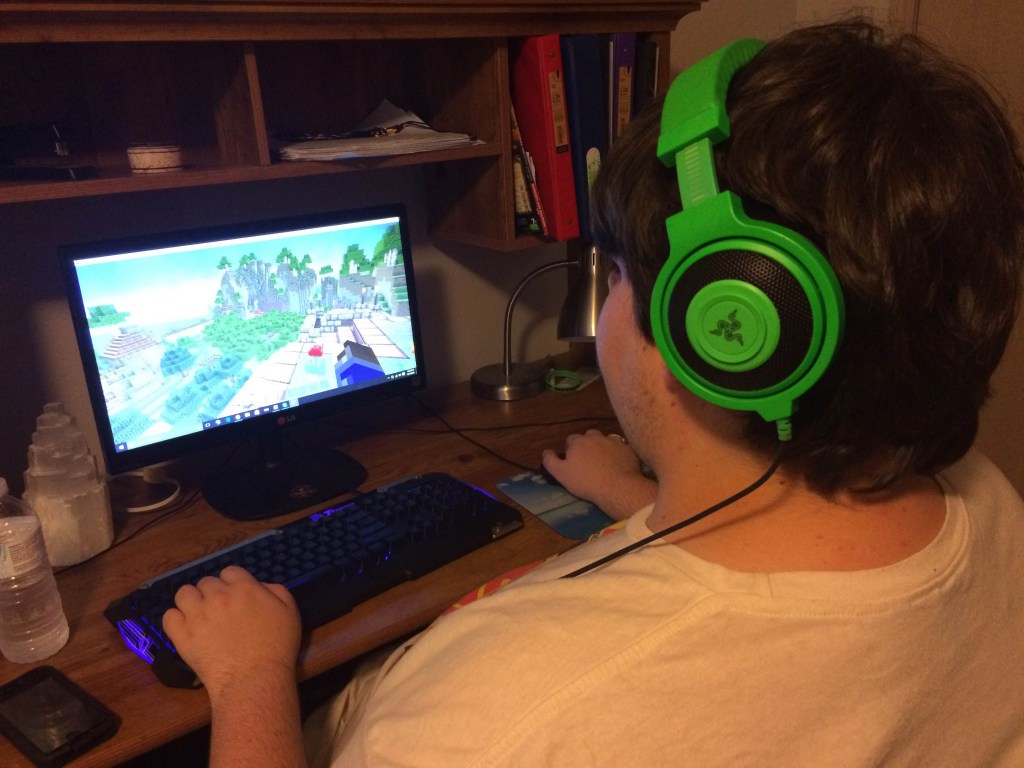 Seldom does a 13-, 18- and 27-year old have much in common. One will soon be beginning his time in high school, one his time as a college student and the other moving forward in his career and maybe having a family of his own in the near future.

However, they all like to create things. They all have large imaginations. They all are fans of the video game Minecraft and they are far from the only ones.

Minecraft is a 2011 sandbox video game originally created by Swedish programmer Markus “Notch” Persson and later developed and published by Mojang. Players can build constructions out of textured cubes in a 3D world. The term “sandbox” means its a gaming platform that allows players to engage in several different activities as they choose, which, in Minecraft, includes exploration, resource gather- ing, crafting, and combat.

Some build replicas of famous buildings, ships or monuments. Others, like Aidan Addington spend their time building entire worlds.

Addington, 18, found the game while watching a YouTube video by a Minecraft enthusiast when the game first came out.

“It seemed creative and interesting,” he said. “It’s pretty unique compared to other games.”

The game can be played solo, or on multi-player mode with people from around the world. Addington, who recently graduated from Oxford High School, prefers to play in multi-player, unless he’s working on one his projects, then he remains solo and gets down to building.

He has been working on his current world for more than a year.

“There’s multiple cities, roads that connect, small villages, ships on the ocean,” he said. “It’s entire world.” The game, which has sold more than 70 million copies worldwide, is like Lego online. Everything is a pixelated 3D box in a variety of materials, from wood to stone and grass and trees. One starts on a small island and must build a shelter to protect them from the monsters, zombies and spiders that come out at night. As the player progresses, they are able to make better tools and gather stronger materials.

Herron French, 13, once built a replica of the Titanic. He started playing the game when he was about 8 years old. His brother received a trial version when he bought a game for his Xbox and they gave Minecraft a try. They convinced their mother to buy the full game.

“I’ve been playing since,” he said. “I like the variety. There’s so many things you can do; you’re not limited to one thing. There’s no set path to follow. You make your own path.”

Unlike Addington, French likes playing in single-player mode mostly. His current project he’s finishing up is a windmill farm which has taken him about two months. French wants to be an alternative energy engineer someday, so a world of windmills was seemed like a natural project for him to dive into on Minecraft.

Minecraft has received several gaming awards since its launch and can be played on the computer and the Xbox console. There is also a mobile version available and has been named as the best-selling PC computer game and the third best-selling video game of all time.

While many video games today are based on violence, shooting people, stealing cars or killing zombies, which often makes them unpopular with parents and educators, Minecraft has been used in many classrooms around the world. Enough so, that Microsoft released a new version of the game, Minecraft Education Edition that is geared for the classroom, allowing teachers to use the game to tech subjects ranging from STEM topics to arts and poetry. It’s being used currently in about 400 classrooms internationally.

Adrian Hakim, 27, a digital artist, started his Minecraft journey when it first came out and said he purchased it right away, being “sold immediately on the concept.”

“Nowadays, Minecraft has gone through many versions and has aged greatly but back then in the early days the world consisted of a flat plane that had a single texture and if you joined a game you would get a few blocks – wood, stone, et cetera – for building,” he said. “So when I joined a server the first time, I entered a world of colorful skyscrapers, weird looking houses and strange sculptures. I wandered around this dream-like world for a while until i found a bunch of people standing in one spot. In a wild moment I ran up to them and yelled ‘Hey let’s build a pirate ship.’

“It had rooms for the crew, cannons, masts and a wooden lady in the front. All of this just made from static blocks, built by grown-up men in the digital age. It was magic.”