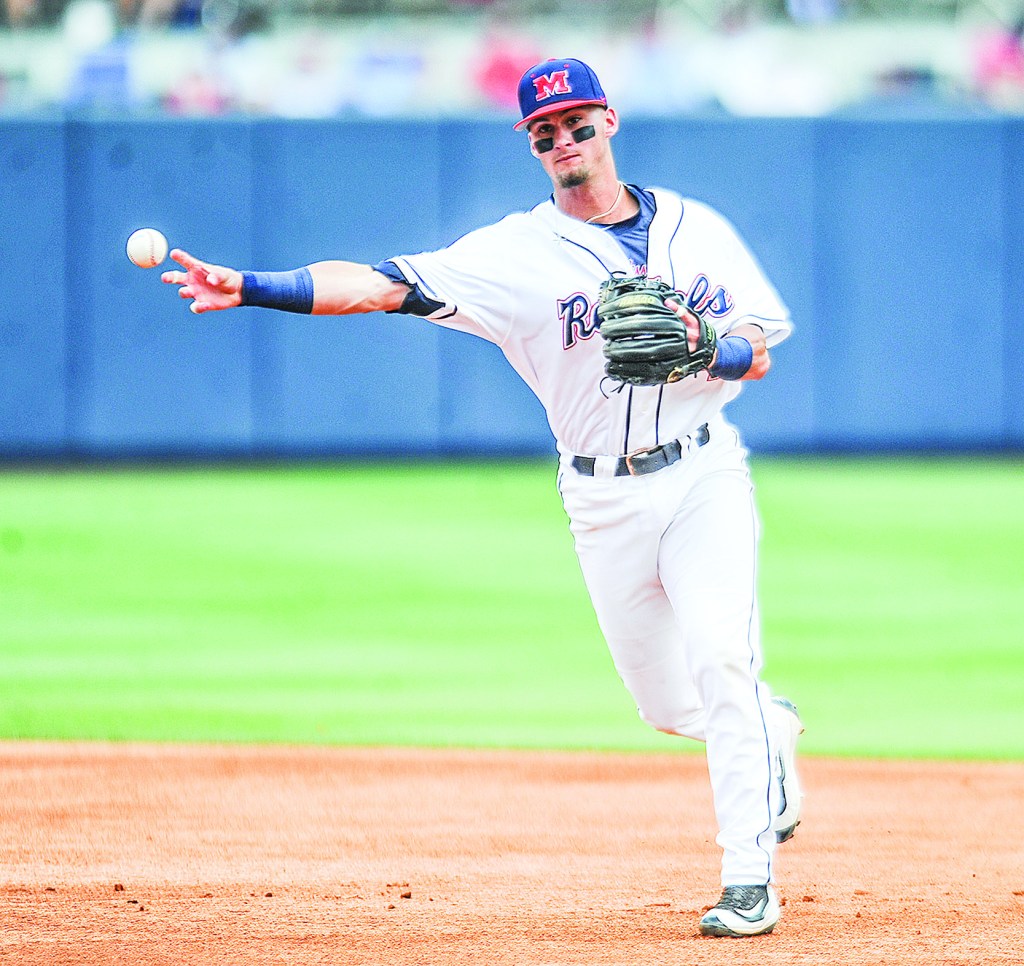 Ole Miss second baseman Tate Blackman will be back for his junior season after not being selected in the Major League Baseball First-Year Player Draft, but the Rebels will have to find new contributors in the field and on the mound after six players were drafted over the weekend. (Bruce Newman)

The damage was expected to be far worse at the conclusion of the MLB Draft.

Ole Miss was looking at potentially losing four out of its five starting infielders as well as its starting center fielder to the ranks of professional baseball.

The Rebels did see shortstop Errol Robinson, catcher Henri Lartigue and J.B. Woodman get selected in the first seven rounds, but third baseman Colby Bortles and second baseman Tate Blackman did not come off the board. Three-fifths of the infield will return for the 2017 season as first baseman Will Golsan will join them.

“I think one, is we don’t know all those guys are going to sign,” Bianco said last week prior to the draft. “Two, we had an older position player group. When you look at 2014, the numbers are probably pretty similar to that. When you look at your positions players, they’re either graduating or they’re getting drafted. I would imagine a few of those will choose to come back.”

It’s very unlikely that Woodman and Robinson will return for their senior seasons. Lartigue is still in the decision-making process, but odds are he will bolt for the MLB as well. Frequent starting left fielder Cameron Dishon and designated hitter Holt Perdzock are lost to graduation.

Replacing those two will not be too much of a puzzle to figure out as Michael Fitzsimmons can take over the designated hitter role as he spent some time in that slot this year. Kyle Watson could become the future starting left fielder as he spent much of the final stages of the season out there.

It could be dual roles for Watson though as he could also replace Robinson at shortstop. Another candidate for the left side of the middle infield could be Ryan Olenek, who was moved to the right field and excelled during his first season ever in the outfield.

“Just proud of the way (Olenek) played,” Bianco said of the true freshman. “He was a lot like Watson the year before. An infielder and you needed a boost in the outfield. You throw him out there one day during practice and say, ‘Can you do this?’ He said sure and runs out there.”

Replenishing the staff
The everyday players were not the only group to see potential loss due to the draft. Three pitchers, including two starters, were taken during the final day on Saturday.

Chad Smith and Brady Bramlett, two weekend starters for the Rebels, were selected by the Marlins and Red Sox, respectively.

Closer Wyatt Short was also taken in the 13th round, along with Bramlett, by the Chicago Cubs.

With three key pieces to last year’s pitching staff having possibly seen their final action in an Ole Miss uniform, it was music to Bianco and his staff’s ears when key signees announced their intentions to honor their commitment to Ole Miss.

Ryan Rolison, a left-handed pitcher from Jackson, Tennessee, was one of the crown jewels of the 2016 signing class and announced he will arrive to Oxford in July.

Rolison is one of eight pitchers Bianco inked during last fall’s signing day, including Oxford’s Jason Barber and Houston Roth.

“That’s why this next class is so big,” Bianco said of signing 17 players for next year. “It’s why the last class that came in had like 11 pitchers because we knew that we returned Bramlett, Stokes and Short last year as the only guys who had significant innings. How do you do that? You do that by signing some junior college guys like Smith and (David) Parkinson and a plethora of freshmen that pitch.”