Pace Ward figuring out life as he goes at book store 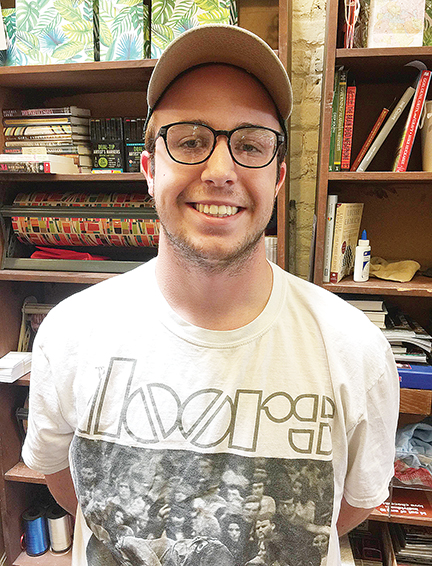 LaReeca Rucker Pace Ward works behind the counter at Off Square Books.

The Dart is a weekly feature in which a reporter throws a dart on a map and finds a story where it lands.

Pace Ward, 20, lived in Memphis the first part of his life, but moved to Southaven with his parents when he was 7.

“I don’t really claim Memphis because I don’t remember much about it,” he said Sunday standing behind the counter at Off Square Books.

One of the first things his father told him to do after arriving in Southaven was go out and make friends with the neighborhood kids. That proved to be problematic.

“I found some heathen kids,” he said. “I lived in one of the brand-new subdivisions, and we went to one of the houses that was not fully developed yet and put rocks down one of the pipes, and my dad got really mad. He always had to know where I was going after that.”

Pace made other friends and spent much of his life playing football in the front yard. He attended DeSoto Central High School and loved literature and calculus.

“My senior year, I got really interested in calculus,” he said. “I just found out I was really good at it. The way I look at calculus, it’s like a more right brain version of regular math. There are a lot of theories, and it was a really cool, interesting way to see how everything you’ve learned about math can come together, like trig stuff, algebra, limits.

“I remember the first time I learned about limits; it blew my mind. You can’t split something in half to the point that it reaches zero. It’s always going to be smaller and smaller. That’s what a limit is. That was pretty cool.”

Pace was in a band in high school called “96 Bulls” that played “grungy, sad” music. Then he got a job as an electrician’s apprentice.

Now, he’s living in Oxford and attending school at the University of Mississippi, where he is a junior English major who is part of the honors college.