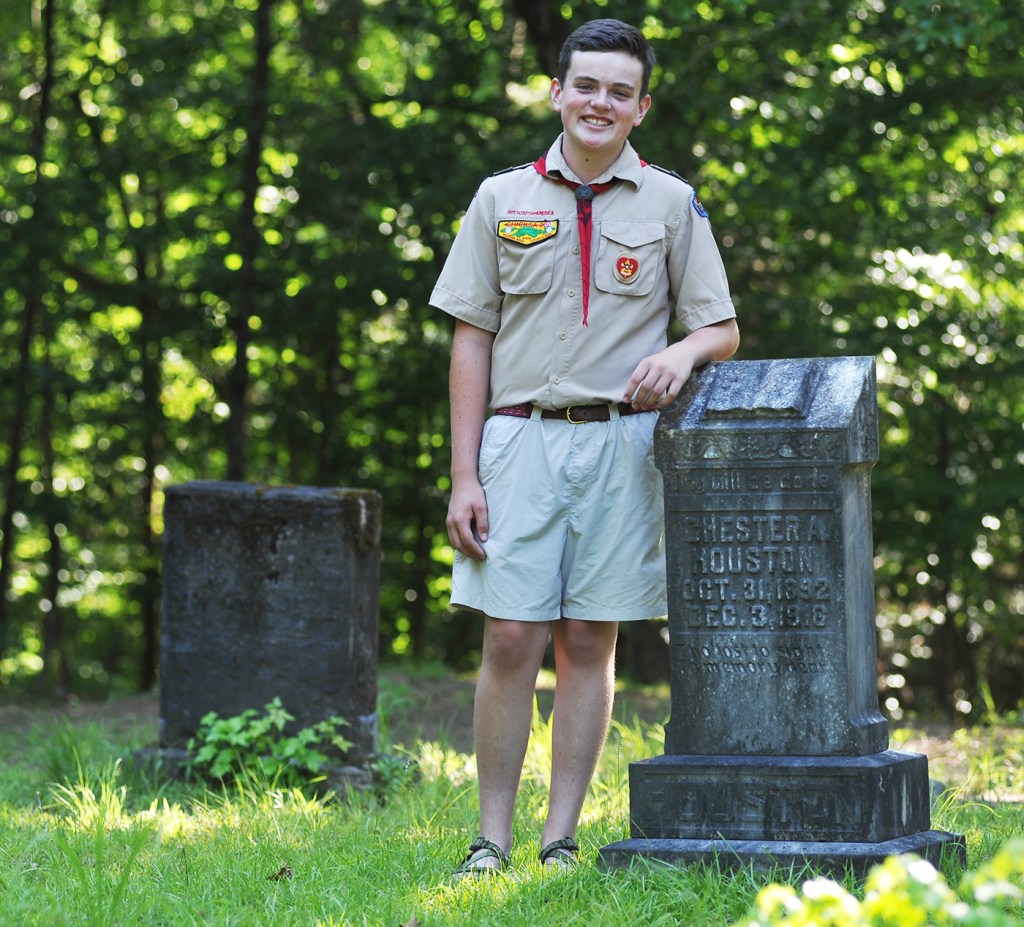 Boy Scout Pope Mallette stands in the cemetery near Yellow Leaf Baptist Church that he cleared, in Oxford, Miss. on Thursday, June 23, 2016.

Working toward earning the rank of Eagle Scout is a several-month process. From filling out a lot of paperwork, to planning a community service event, it can be a lot of work and it should be, since it’s the Boy Scouts of America’s highest ranking for Scouts.

Pope Dolby Mallette, 14, decided his Eagle Scout project would be one that would help U.S. veterans — both living and deceased.

Mallette has been working on his Eagle Scout for about four months he said. He got involved in the Boy Scouts when he was 11 after attending two Eagle Scout ceremonies for his friends.

“I thought it would be a cool thing to do,” he said.

The detachment, then known only as Marine Corps League Detachment No.1431, wanted to name its newly

formed group after Willie Morris Jones, who died in Vietnam at the age of 21 while serving in the U.S. Marines.

The Marine detachment planned a dedication ceremony in May at the cemetery to name the detachment after Jones where they would present Jones’ surviving family with a plaque.

The cemetery, however, was overgrown and covered in leaves.

Mallette decided cleaning the cemetery for the ceremony would be his project.

“The cemetery wasn’t in good shape,” he said. “I wanted to clean it up and make it look nice. It took a lot of mowing and weed-eating, but the main thing was the amount of leaves we had to get up.”

Mallette also is working with the Lafayette County Genealogy Society to update the African-American cemetery’s records.

“It’s pretty outdated,” he said of the current cemetery record.

Two fellow Scouts, their fathers, a couple friends and his father, Pope Mallette, helped clean up the cemetery before the ceremony to honor Jones and his family.

“We wanted to make it look nice for the dedication ceremony,” he said. “I’m not sure it would have been done if someone didn’t step in and I believed it was for a really good cause.”

Mallette says he is considering going into the military after college. He may look into being an attorney, like his father, who is also a veteran. He also might want to go to medical school, or maybe become an architect.

“It’s a little early yet for me to decide,” he said.