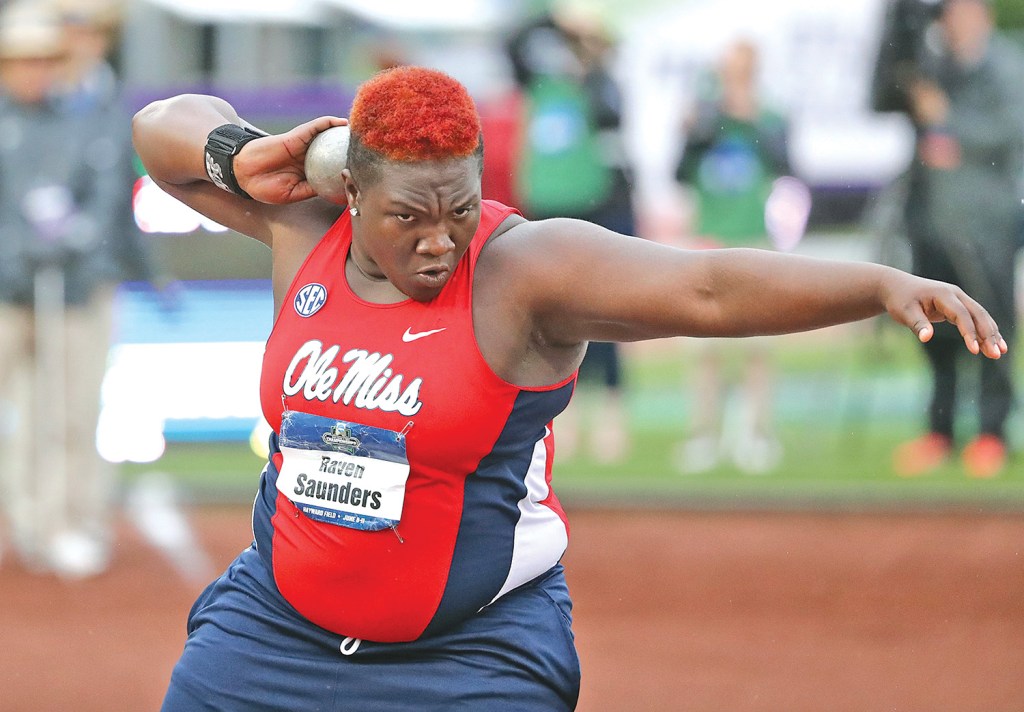 NEW ORLEANS — The names of past Bowerman Award finalists represent the most elite recent track & field athletes in not only U.S. colleges, but the world. Ole Miss sophomore Raven Saunders can now count herself among that select company.

On Thursday, Saunders was selected as one of three women’s finalists for the Bowerman Award by the Bowerman Advisory Board. The iconic 35-pound trophy named after legendary Oregon coach Bill Bowerman has been presented by the U.S. Track & Field and Cross Country Coaches Association (USTFCCCA) to the top man and woman in college track & field each year since 2009.

Saunders, who recently won the NCAA outdoor shot put crown with a collegiate-record throw of 19.33 meters (63-5), is joined by Texas sprinter Courtney Okolo and Georgia jumper Keturah Orji as women’s finalists. The three men’s finalists will be announced Friday.

A native of Charleston, South Carolina, Saunders has set the throwing world on fire in her first year at Ole Miss after transferring from Southern Illinois University following her freshman season.

Saunders is the first Ole Miss athlete to be named a Bowerman Award finalist. Two-time NCAA pole vault champion Sam Kendricks was a men’s semifinalist in 2013.

Her season isn’t over yet, either. Saunders will compete for Ole Miss at the U.S. Olympic Trials (July 1-10, Eugene, Oregon) and has been selected to represent Team USA for the NACAC U-23 Championships (July 15-17, San Salvador, El Savador).

Okolo dominated the NCAA Championships 400 meters title with a 50.36 for the 10th-fastest time in collegiate history. She came back later that day to rally the Longhorns 4×400 relay to a national title as she overtook two teams on the final straightaway. Her NCAA Championships accomplishments came after she broke the collegiate record earlier this season with a 49.71 run – the first sub-50 clocking in collegiate history.

Orji not only twice broke the collegiate triple jump record this season, but she also topped the American Record in the event. At the NCAA Championships, she leaped 14.53 meters (47-8) for the all-time college and U.S. records, besting her own college record of 14.29 meters (46-10.75) set two weeks prior at the NCAA East Prelims. All 11 of her measured attempts this season surpassed the No. 2 collegian, and she surpassed 14 meters with a legal wind six times – no other collegian has done that more than four times in an NCAA career.