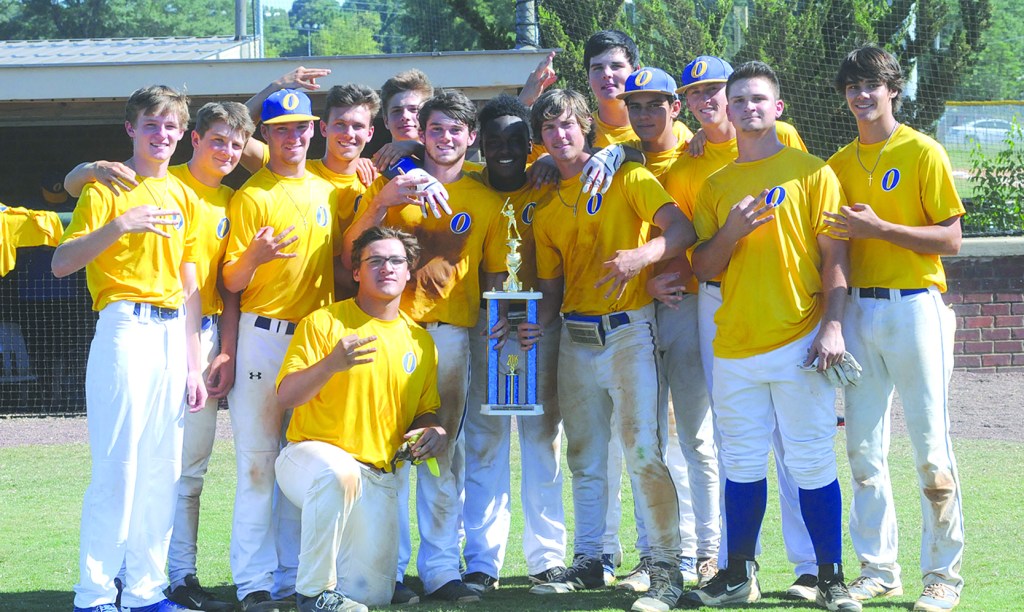 Members of the Oxford High baseball team pose with the championship trophy after beating New Hope 8-7 in the NEMCABB tournament championship game Thursday in New Albany. The Chargers finished unbeaten in the tournament. (Jake Thompson)

NEW ALBANY — There may be a stigma that summer baseball for high school teams is a laid-back affair where some of the younger players take advantage of newfound playing time and results are not a factor.

That is not the case for Oxford. After claiming its second straight MHSAA Class 5A championship in May, there was only one thing on the Chargers’ mind this summer.

“Three peat,” the team would say before each game as they took the field during the Northeast Mississippi Coaches Association for Better Baseball (NEMCABB) tournament this week.

Oxford is well on its way if the past three days are any indication as the Chargers defeated New Hope, 8-7, to claim the NEMCABB tournament championship Thursday afternoon at the New Albany Sportsplex.

It was in dramatic fashion as the Chargers used two walk-off wins in as many games, defeating Houston 2-1 earlier in the day during the semifinal round before taking on New Hope.

“I was very proud of how they competed,” Oxford coach Chris Baughman said. “Obviously the understatement would be this is something for us to build on going (into next season). And this is what we wanted this summer to be.”

Trailing the Trojans 7-6 with two outs in the bottom of the seventh, Oxford starter Duncan Graeber hit a two-RBI single on a 3-2 count to score Giles Lamar and Drew Bianco to clinch the Chargers’ first NEMCABB title.

On the mound, Graeber went four-plus innings, giving up three runs, all earned, off six hits while striking out three and walking two. After giving up a leadoff walk in the fifth, he was replaced by Bianco, who pitched the final three innings.

“I struggled on the mound, but all it takes is one swing to finish the game,” Graeber said. “Especially going one-and-out these past two years (at NEMCABB) and ending up winning state, we talked about it before when we were on the way over here. … We go win state two years in a row then we go one-and-done in the summer. That’s not us.”

It was the first time Oxford had made it past the first round of the single- elimination portion of the tournament. The Chargers went 6-0-1 throughout the entire tournament, including the regional round last week.

The game itself was a back-and-forth affair between the two Region 2-5A foes. New Hope got on the board first with a run in the top of the second, but the Chargers responded with two of their own in the home half of the frame to make it 2-1.

From there, the lead changed five more times and became tied twice.

Defensive boost
Even though the lead seesawed a couple more times after, a key moment for Oxford came in the fifth inning. Bianco had just relieved Graeber on the mound, and with a runner at first, he induced a double play ball and followed with a flyout to right field, getting Oxford out of a jam and back into the dugout with a 5-3 lead at the time.

“That gave us a little more energy,” Baughman said of the fifth inning. “I could tell on a passed ball and a wild pitch and a double (in the seventh inning), and I just went out there and told them, ‘(New Hope) may be beat us, and that’s OK. We’re going to have to fight through a little adversity some.”

The brothers Bianco
Plenty of players were key in helping Oxford win, but none may have been more important than a player who was not involved in the tournament until the final day.

With both of his regular catchers unavailable for Thursday’s games, Baughman had to make a phone call Wednesday night. He was able to get Sam Bianco behind the plate, which proved vital to their success.

If the younger Bianco had not been able to catch, it would have been his older brother, Drew, which may have made him unable to pitch when he did in the late stages of each game.

“We get on the phone and we start calling, and I texted Drew and asked, ‘Has your brother ever caught?’” Baughman said. “(Drew) said, ‘He’ll be there.’ And for me to have Sam come in and show me, that gives me way more confidence if Ben (Bianco) does not come back 100 percent healthy and is not able to catch. It gives me all the confidence in the world that I’ve got three guys I can put back there in the spring and not move Drew if need be.”