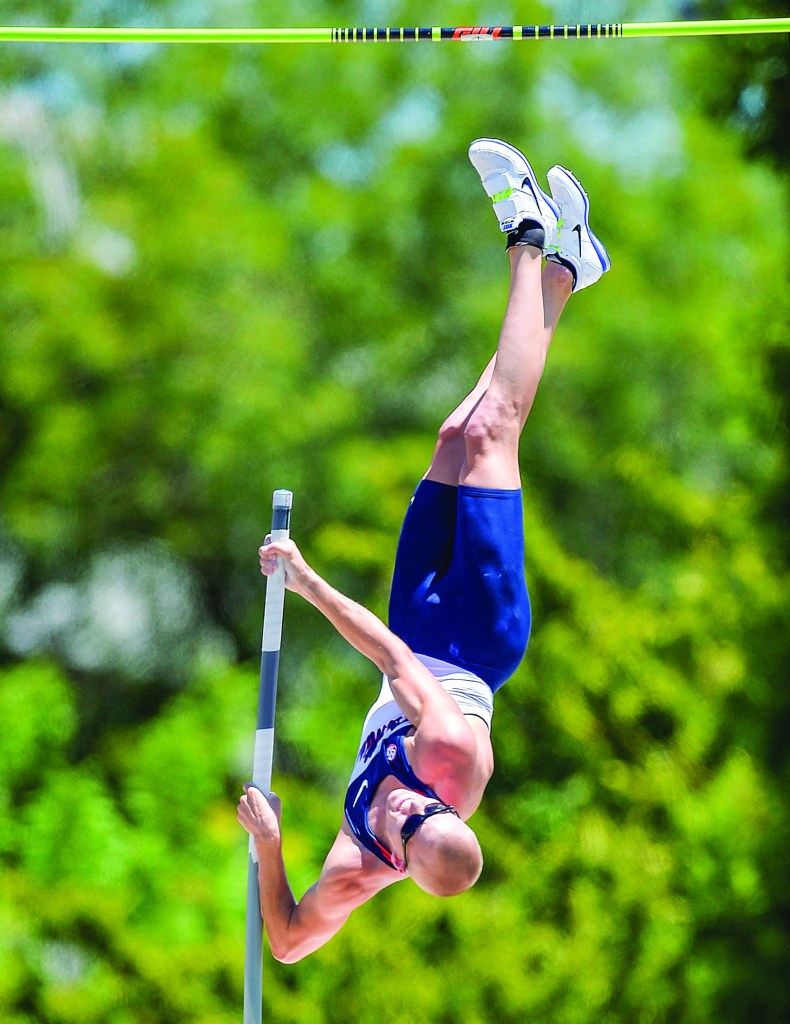 There is one thing he has not yet been able call himself though. Olympian.

The Oxford native is one more solid performance from being able to check that off the list.

Kendricks will compete in the pole vault finals of the U.S. Olympic Trials this afternoon in Eugene, Oregon. The event will take place at 5:30 p.m. CT and can be seen online at olympics.nbcsports.com. He found his way into the finals after clearing three jumps on the first attempt during the qualifying round on Saturday. His best mark was 5.55 meters (18 feet, 2 inches), tying two others for first place. The top 13 vaulters advanced to today’s finals, and only the top three will make the U.S. team.

This year, Kendricks is at the top looking down at his competition, but four years ago he was on the outside looking in. He was the 25th athlete on the event list but only 24 vaulters can compete, leaving the former Oxford Charger to wait another Olympic cycle before he could try to realize his dream.

“This is something that I’ve been training for over the past few years,” Kendricks said. “In 2012, I was competing for Ole Miss and I was the last man that didn’t get to jump in the trials. So from that point forward we just said, ‘Well, we can only go up if we want to pursue this elite pole vault dream.’” So I trained at the University of Mississippi.”

Before he headed out West for the trials on Wednesday, Kendricks took a step back to rest and recharge after a rigorous spring schedule. He competed at the world indoor championships in Portland in March where he took the silver medal. After the world indoors, Kendricks competed around the country before heading over to Shanghai for a Diamond League series meet in May where he claimed first place, besting France’s Renaud Lavillenie by .05 meters. After China, it was back to the U.S. for another week of competing before winding back home in Oxford where he rested for nearly four weeks.

“I had some peak competitions,” Kendricks said. “So we realized that if we were going to extend our high level competitive cycle, me and my coach (his father, Scott Kendricks) decided that we were going to forgo a couple of meets this month to stay at home and calibrate for the trials.”

This event is nothing new to Kendricks. During the three years there is not an Olympics held, this same event this week in Oregon is the U.S. Championships. He had steadily improved his results over the course of competing against the nation’s best. The past two years, he has claimed the U.S. pole vault title. With those accomplishments, along with having succeeded earlier this year against some of the world’s best in China, Kendricks’ confidence is high. He has held the world’s best jump (5.92 meters) for six weeks in a row heading into the trials.

“It gives me an edge where otherwise guys would be stepping in foreign territory,” Kendricks said. “A lot of confidence comes with that. I’ve done it before. Me and my coach have been there, and we don’t have to have a lot of uncertainty plaguing us like a lot of other guys may have.”

Local support
It is very rare in sports that an athlete who grows up and has success in his high school then moves on to be just as successful if not more so at the local university in his hometown. Kendricks did that, claiming titles at Oxford and then winning national championships during his time at Ole Miss. That has given him double the hometown support that most athletes find in their cheering section.

All that has done is humble Kendricks, who just wants to give back to a town that gave him so many opportunities.

“I competed for Oxford longer than I competed for anything else,” Kendricks said. “I’ve had that Oxford support longer than I’ve been anywhere else. Whether it be Ole Miss or post collegiate now, I’ve never strayed too far from Oxford. I’ve always lived here and I’m thankful that people still know and care about my future and my plans and what I’m working for.”