CLEVELAND: Nick Kolinsky was a friend to all 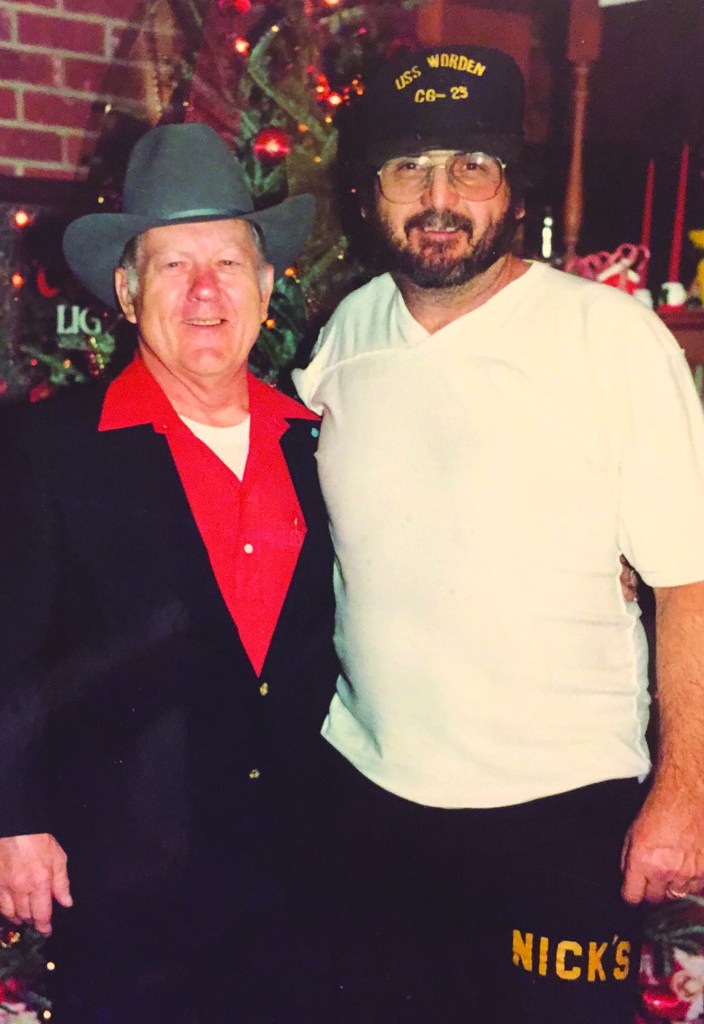 After seeing a story on the local news, Nick Kolinsky, left, and Jack Lucas became instant family over the bond of their military background. (Submitted Photo)

My old and good friend Nick Kolinksy, a patriot if ever there was one, died on July 5, a day after his 77th Independence Day.

Nick was an Army veteran, who loved his country and the men and women who fought for it. But he was much more than that, as we will see. He was a football star, a square-jawed, bull-strong linemen on a national championship (1962) team at Southern Miss. A Pennsylvania native, Nick learned about USM when he was in the Army and drinking beer with some other soldiers in a German beer hall. One had attended USM and raved about it. Nick decided right then he was going to go to college in the funny-named town of Hattiesburg. And he did. When he left Pennsylvania, he told his mother he was headed for Mississippi. Her reply: “Son, that’s a river, isn’t it?”

When he got to Hattiesburg, he walked, unannounced into Hall of Fame football coach Pie Vann’s office. “My name is Nick Kolinsky, and I want to play football for you,” he told Vann.

Vann gave him a tryout and then quickly a scholarship. Nick flourished at USM. And he never left Hattiesburg. He was an entrepreneur, a tavern owner who also ran a moving business. He was a devout Catholic, a family man, a husband, father, grandfather and great-grandfather. He was a Hattiesburg icon, possessing remarkable spirit, energy and work ethic. He was an emotional guy, who laughed and cried often, with no apologies for the latter. He was a doer.

In 1981, Jack Lucas was a stranger. One day after work, Nick was watching TV, flipping channels, until he saw a CBS news program with images of the Battle of Iwo Jima in World War II. He was hooked.

The program told the Jack Lucas story. How Lucas, from North Carolina, had lied about his age at 14 to join the U.S. Marines. How, on Feb. 20, 1945, six days after his 17 th birthday, Lucas hurled his body onto two enemy grenades, saving the lives of three fellow marines. How Lucas somehow survived the grenades with shrapnel throughout his body. How Lucas became the youngest ever to win the Congressional Medal of Honor, pinned on him by President Harry S. Truman.

But the program also told how Lucas had fallen on hard times, was living in a meat locker in Maryland on a $200 a month stipend from the government. Because of IRS problems, all other government benefits were garnished.

Soldier in need
Nick Kolinsky was horrified. He could not believe his country would let this happen to such a patriot, such a hero. Nick cried himself to sleep that night and awakened in tears the next morning. Said his wife, Carol: “Well, do something about it.”

Nick called the CBS affiliate in Mobile and was told he should call the national network. He did so and was so insistent he was finally given the phone number of the program’s producer. Nick convinced the producer that all he wanted to do was help Lucas, and the producer gave Nick a phone number.

It took several tries, but Nick finally got Lucas on the phone. They talked and hit it off. Several more phone calls ensued. Nick also made another call to the late U.S. Rep. Sonny Montgomery, a champion of military veterans. Within weeks, Lucas was restored to full benefits.

That wasn’t enough for Nick, who knew Lucas was lonely. So he invited Lucas for a visit and then he offered him a place to live – and a family, his family. Nick and Carol and their four children. Nick and Carol Kolinsky’s daughter, Kim Kolinsky, became particularly close to Jack Lucas, like the daughter he had never had.

“I don’t have much to offer you, but I can offer you a family,” Nick told him Lucas. And that’s the way it went down.

Eventually, Lucas bought his own home in Hattiesburg, and just as Nick Kolinsky, he never left. In the Hub City, Lucas met and married his wife, Ruby. His final years were happy ones. More than 63 years after his act of heroism, Jack Lucas died on June 15, 2008. The section of U.S. 49 between Wiggins and Hattiesburg is known as the Jack Lucas Medal of Honor Memorial Highway.

Legions of friends attended Nick’s funeral last week. Appropriately, there was at least one stranger.

“I never knew this man Nick Kolinsky,” the man from Mobile told the family. “I am here to pay respects because of what he did for Jack Lucas.”

Rick Cleveland is a syndicated columnist and historian for the Mississippi Sports Hall of Fame and Museum. His email address is rcleveland@msfame.com.