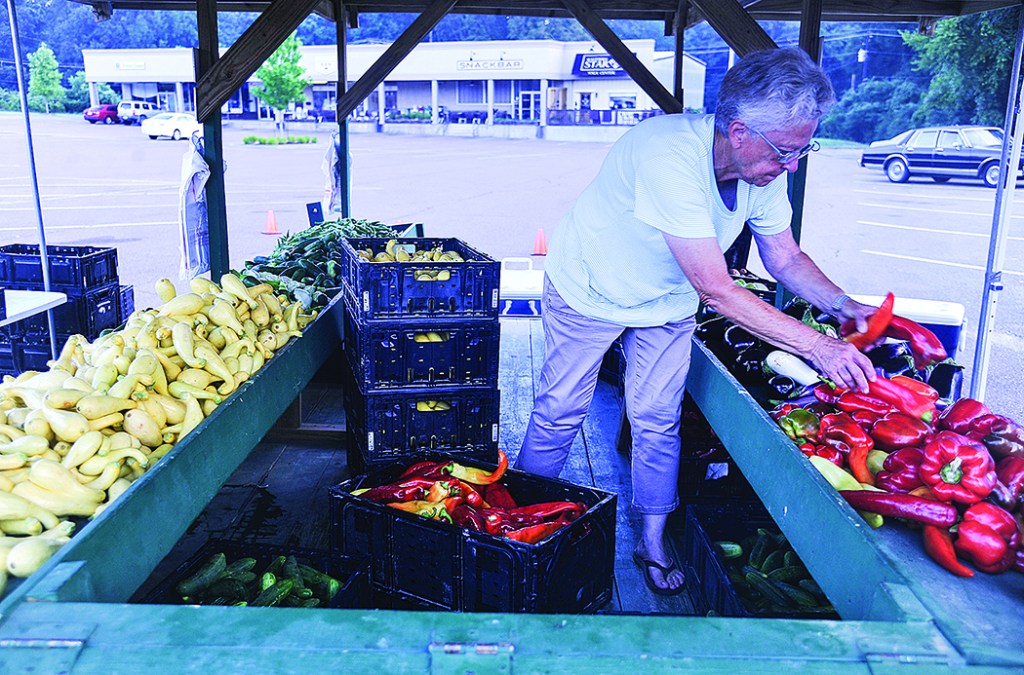 Rachel Boast of Bost Farms puts out peppers to sell at the Mid-town Farmers Market in Oxford, Miss. on Wednesday, July 20, 2016.

Marty Bost started farming at a young age, growing a few potato plants and other small vegetables that he would sell to family friends and neighbors.

As he got older and grew bigger, so did his farm out near the Highway 7/9 split where he lived with his parents, Aileen and Freddy Bost. His parents were both retired teachers and Marty felt it was the right time to get them involved in his farming.

“I’m the one who drugged them in,” he said with a chuckle.

He wakes up every morning at 4 and comes home when the sun goes down. In November, things calm down a bit, allowing Marty and Freddy time to relax just a little, before they start planting cool weather crops, like broccoli and cabbage.

“I give it all I got from March 1 to November,” Marty said. “I’ll work until dark tonight. I got these barrels of peas to shell waiting on me.”

Marty’s son, Cody, is starting to learn the family business and is helping his father and grandfather in the field.

“He’s starting to learn the harder you work, the more money you make,” Marty said.

Marty and his family also run the Mid-Town Farmer’s Market, held each Saturday from 7 to 11 a.m. and 8 a.m. to 1 p.m. on Wednesdays. Aileen is chairman of the board and runs most of the business operations for the family farm on County Road 369 where they also sell their produce.

Freddy prefers to just quietly go about doing his work, although he says he’s enjoyed the friendships he’s made over the years.

Freddy and Aileen have largely turned over the 35-acre farm to Marty.

The farm is divided up into different sections, with one area going to the cool weather crops that the Bosts will start planting in March.

Currently the Bosts are selling their popular big beef tomatoes, huge red peppers, lots of okra, red potatoes and more. They don’t use any commercial seeds in their farm.

“The commercial products have less acid in them which makes them have a longer shelf life but they don’t got the flavor that ours have,” Freddy said.

Since they don’t grow produce engineered for longer shelf lives, their tomatoes have to be sold within three days of picking.

“We could plant that commercial stuff and it would be easier, but anything with a long shelf life don’t have no taste,” Freddy said.

So far this growing season has been a good one for farmers, Freddy said. No year is perfect, he said, but because of the lack of hurricanes coming up from the gulf or tornadoes, coupled with a moderately wet, hot spring and summer, crops are fairing well for the Bosts.

Hurricanes, while they may not hit Oxford, the clouds dump salt water and bacteria they’ve sucked up while moving over the coast, and then dump it down on local farms.

“One year after a hurricane came in, the tomatoes looked like we poured battery acid on them,” Freddy said.

When Wednesday’s market at the Mid-Town Shopping Center ended, the Bosts packed up and headed back to their farm where they would work until “it’s too dark to see and wake up the next morning before the rooster’s crow” to do it all over again.