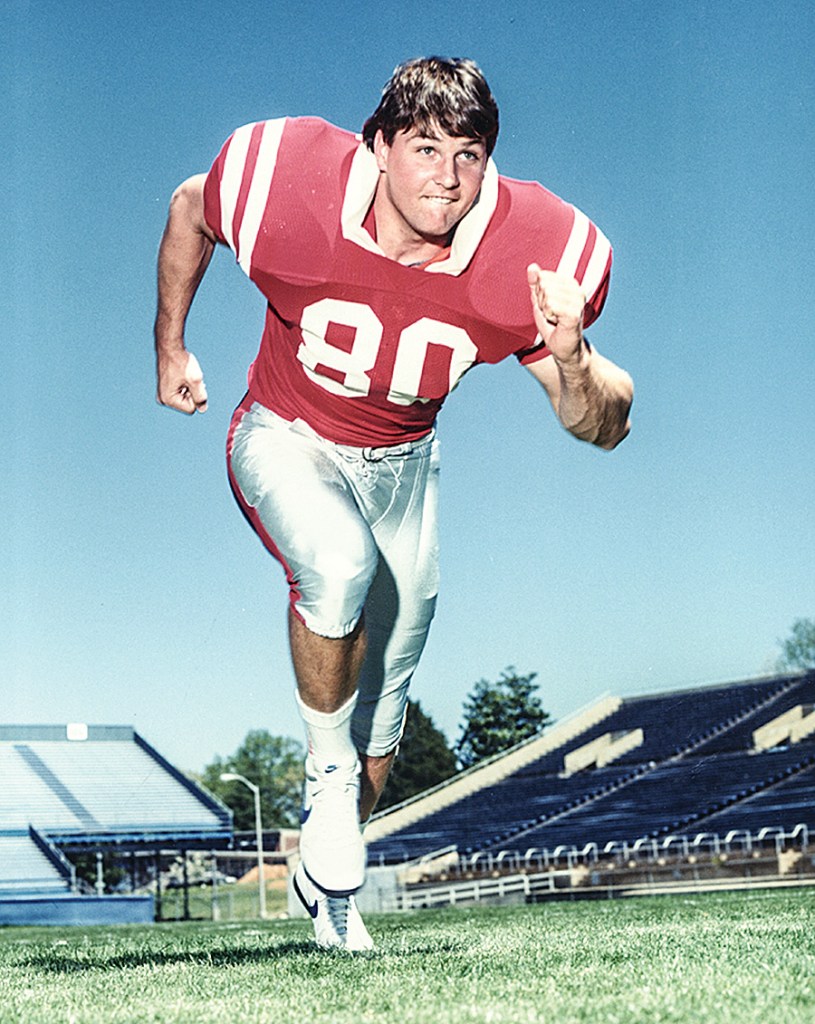 Former Ole Miss and NFL tight end Wesley Walls is one of six members of this year’s Mississippi Sports Hall of Fame class to be inducted Saturday in Jackson. (Ole Miss athletics)

That’s because Mississippi athletes continue to achieve on a national and international level. That’s the case with both Sean Brewer and Wesley Walls, who have gone into the national college football  shrine over the last couple of years and will go into the Mississippi Sports Hall of Fame this Saturday night in the ceremonies at the Jackson Convention Complex.

Brewer and Walls are two members of a diverse and accomplished MSHOF Class of 2016, joining basketball coach Kay James, football coach Jackie Sherrill, basketball standout Larry Smith and football pioneer Willie Heidelburg. I am proud to have witnessed and chronicled all six and have personal memories of each.

Walls was one of those guys you knew was destined for greatness the first time you saw him: tall, rangy, strong and fast. And then you interviewed him and learned he had all the intangibles, as well. He was so good at Ole Miss, he starred on both sides of the ball, as a tight end and as a defensive end. In the NFL, he concentrated on the tight end role and caught 450 passes and 54 touchdowns over a 15-year career, despite many and varied injuries. Walls caught his last professional touchdown pass from 2015 MSHOF inductee Brett Favre in 2003.

Brewer was a three-time All-American at Millsaps, so good the national award for the most outstanding lineman in NCAA D-III is now the Sean Brewer Trophy. The son of Mississippi Sports Hall of Famer Johnny Brewer, Sean was the most dominant defensive player I ever covered at any level of football. (A couple Saturdays back then, I skipped the Division I games to go watch Brewer play.) He lived in the other team’s backfield, completely disrupted offenses. He would have been a star at the Division I level, just three or four inches shorter than most.

Alcorn State and NBA basketball standout Larry Smith ranks as surely one of the most relentless rebounders and defenders in this state’s – or any state’s – history. Mr. Mean, they called him, because he never smiled once he crossed onto the basketball floor. Larry played with an intensity so characteristic of those great Alcorn teams of Hall of Famer Davey Whitney. He believed every rebound, every loose ball belonged to him, and, in the end, they usually did. Smith starred in one of the most famous basketball games in Magnolia State history and scored the winning basket in Alcorn’s historic NIT win over Mississippi State at Starkville in 1979.

Kay James came to USM after winning a small college championship at Berry (Ga.) College. Then-USM president Aubrey Lucas had experienced women’s basketball success when he held the same job at Delta State. He wanted to duplicate that success at USM, so he asked the late, great Hall of Famer Margaret Wade, whom he should hire. Coach Wade suggested he should hire James, a Gulfport native. And that’s what Lucas did to his everlasting credit. James, whose teams played an up-tempo, entertaining style, won 403 games over 20 seasons and garnered 10 post-season bids.

Jackie Sherrill played his high school football in Biloxi, where Bear Bryant went to recruit him for the Alabama Crimson Tide. Sherrill played seven positions at Bama and starred on two national championship teams. Even so, it is for his coaching that he lands in the MSHOF. He won big at Pittsburgh and Texas A&M before coming to Mississippi State where he became one of the most beloved figures in Hail State athletic history. Sherrill remains the only Mississippi coach to take a team to the SEC Championship Game. Through it all, he was a sports writer’s dream, whether he was turning a bull into a steer or stirring the pot with rival coaches.

Last and least (but only size-wise) is Willie Heidelburg, known as Wee Willie, who at 143 pounds became the first African American to make a huge splash at one of Mississippi’s historically white schools. After a two-year hall of fame career at Pearl River Community College, Heidelburg earned a scholarship at USM. There, he famously scored two touchdowns in USM’s historic, 30-14 victory over Ole Miss in 1970. Hamp Cook, another Mississippi Sports Hall of Famer, was the USM offensive line coach at the time. Said Hamp, “I couldn’t wait to get back home and watch the film and see how my guys blocked on Willie’s two touchdowns. Hell, we didn’t block any of them. Willie just dodged them all.”

Ben Williams, Ole Miss’ first black football star, and Mississippi State’s Frank Dowsing have preceded Heidelburg, who died in 2013, into the Hall of Fame. All are so deserving. Somebody had to be first. They were, showing the way for the multitudes of great African American athletes who have followed.