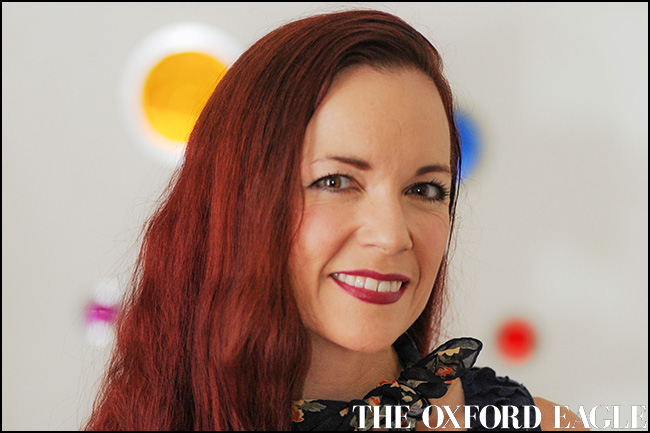 A celebrated and award-winning writer, Beth Ann Fennelly believes in sharing her love and knowledge of the arts of poetry and writing with all Mississippians, from the very young to the very old.

For the next four years, she will be able to do just that as Mississippi’s poet laureate.

The Mississippi Arts Commission announced today that Fennelly has been appointed poet laureate by Gov. Phil Bryant, honoring her as not only an outstanding Mississippi author but also an ambassador for the literary arts.

During her four-year term, Fennelly will serve as the official state poet and will work to make poetry more available and accessible to Mississippians in their everyday lives. This includes creating and reading poetry during state occasions and participating in school and community events that promote appreciation of poetry as an art form.

The distinction of Mississippi poet laureate dates back to 1963.

Fennelly found out she had been selected late last week.

“I knew I had been nominated in December,” she told the EAGLE. “In January I was interviewed by the committee and then three finalists’ names were put forward.”

For more than seven months, Fennelly waited to find out whom the governor had selected. The wait was worth it.

“I was completely thrilled,” Fennelly said on finding out she had been chosen. “I couldn’t believe it really. Natasha Trethewey is someone I greatly admire and to follow her is an honor.”

Fennelly said her main mission will be to get poetry into the hands of Mississippians as frequently as possible and she already has several ideas on how to accomplish her task.

“I will do a lot of readings and performances of my work and I’m looking forward to talking to the audiences about the poetry I wrote in Mississippi about Mississippians to Mississippians. I’ll do workshops and hold classes.”

“I want to teach (children) they don’t have to be scared of poetry,” Fennelly said. “I also look forward to spreading the word about the Mississippi Book Festival where our best authors are showcased.”

Some of Fennelly’s new responsibilities will include serving as the official state poet, creating and reading appropriate poetry at state functions; help identify Mississippi poets, write poetry and promote literacy arts by attending and speaking at schools and other organizations; to serve as the honorary host of the Poetry Out Loud Initiative and serve as the Mississippi Arts Commission teaching artist.

The Poet Laureate appointment is an honorary position and does not include a stipend. Mississippi Arts Commission Grants are available to non-profit organizations to compensate for up to half of the total fee of a presentation by the poet Laureate.

Fennelly is the director of Master of Fine Arts program at the University of Mississippi where she teaches poetry and nonfiction writing.

W.W. Norton published Fennelly’s second and third collections of poetry, “Tender Hooks” (2004) and “Unmentionables” (2008), as well as her book of nonfiction, “Great with Child: Letters to a Young Mother” (2006).

In 2013 HarperCollins published “The Tilted World,” a novel that Fennelly co-authored with her husband, Tom Franklin. It was named an IndieNext Great Read, became a finalist for the 2014 SIBA Book Award and has been published in six foreign editions.

“Beth Ann’s accomplishments in literature are too numerous to mention,” said Malcolm White, executive director of the Mississippi Arts Commission. “We are thrilled that she has chosen to make her home in Mississippi and contribute to arts and education in our state. She is an excellent choice for Mississippi’s Poet Laureate.”

Born in New Jersey and raised in the Chicago area, Fennelly has written and taught in locations around the United States and the world before settling in Mississippi in 2001. She received a Bachelor of Arts magna cum laude from the University of Notre Dame, and then taught English for a year in a coal-mining village on the Czech/Polish border. She returned to the States to earn her Masters in Fine Arts from the University of Arkansas. Fennelly then completed a Diane Middlebrook Fellowship at the University of Wisconsin and went on to teach at Knox College in Illinois. She has completed residencies at the University of Arizona and MacDowell Colony in New Hampshire, fellowships at Middlebury’s Bread Loaf Writer’s Conference and Sewanee, and a 2009 Fulbright grant studying poetry in Brazil.

Fennelly has received a number of prestigious national awards, including a 2001 Pushcart Prize and a 2002 National Endowment of the Arts grant in poetry. She received a United States Artist Grant in 2006 and the Subiaco Award for Literary Merit in 2012. The Mississippi Arts Commission awarded Fennelly grants for nonfiction in 2005 and 2015, and for poetry in 2010. Most recently, she was awarded the Orlando Award in Nonfiction from A Room of her Own (2015) and the Lamar York Prize in Creative Nonfiction from The Chattahoochee Review (2016).

Fennelly and her husband came to Oxford in 2001 when he was chosen as the UM John and Renée Grisham Writer in Residence.

“We fell in love with Oxford and decided to make this our home,” Fennelly said. “We just bought two burial plots in St. Peter’s Cemetery so this is our forever home. We’re proud Oxonians.”

New COA applications will be online