CHANGING IT UP: Ole Miss’ Haynes wears motivation on his chest 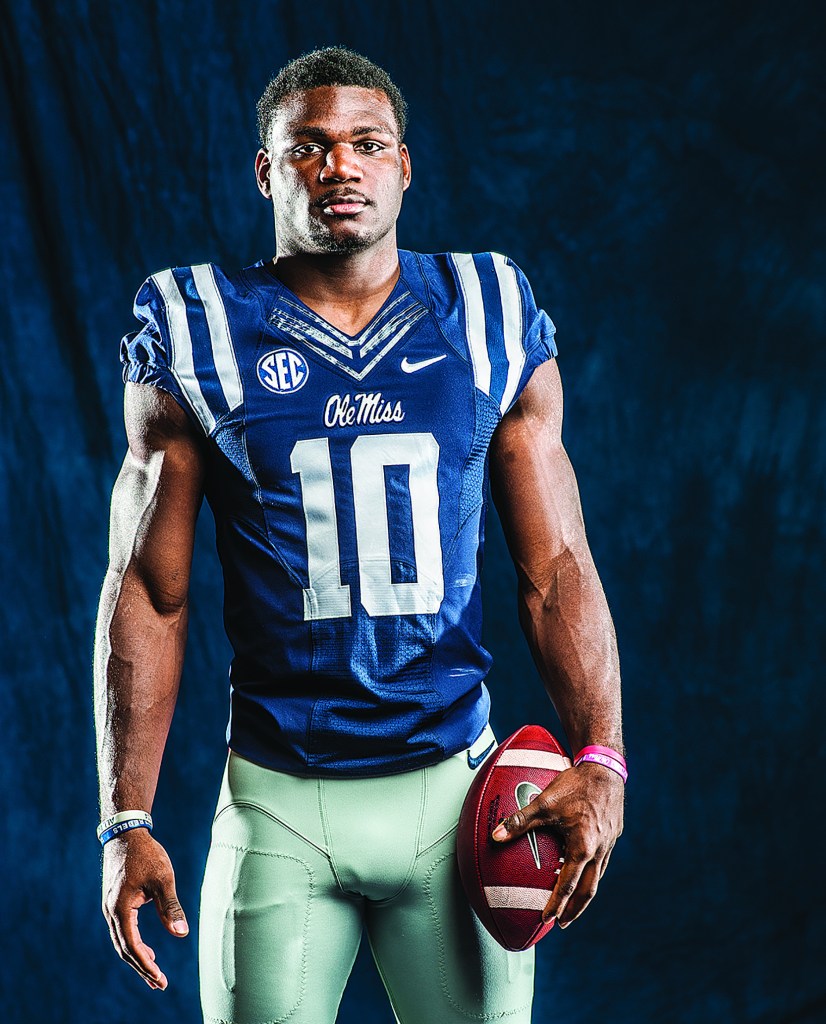 Junior defensive end Marquis Haynes will wear No. 10 this fall as a constant reminder of a sack total the Rebels’ pass-rush specialist wants to improve on this fall. (Bruce Newman)

Ole Miss’ defensive end said he’s emphasizing two areas of his game heading into his junior season. First is becoming a bigger presence stopping the run to complement his specialty of getting after quarterbacks. Next is refining his technique so he can shed blocks from offensive linemen faster to make any kind of play.

But Haynes’ first order of business heading into this season was to change some of the stitching on his uniform.

Haynes, who wore No. 27 his first two years with the Rebels, will wear No. 10 this fall. While it means Haynes will take over the number left behind by the departed C.J. Johnson, whom Haynes called “my role model,” the change was primarily a motivational alteration.

The number matches Haynes’ sack total last season, which was good for 19th nationally and joined him with Phillip Kent, Dewayne Dotson and Greg Hardy as the only Ole Miss players to get to the quarterback that many times in a season since 1990. But the 6-foot-3, 222-pound Haynes wants his name to be closer to the top of the school’s single-season sack list before his college career is over.

Ben Williams, Ole Miss’ all-time sack leader, holds the record for sacks in a season with 18 in 1973.

“This No. 10, it’s got a main meaning to me,” Haynes said. “I ended with 10 sacks, and I was trying to get past that. So I’m wearing 10 just to let me know and remind myself every day when I wear this number I’m trying to get past 10 to break the (recent) sack record for the season.”

“Almost all of his sacks have been off straight speed, and this last spring I really felt like was the first time he developed himself as a complete pass rusher,” Kiffin said. “That’s why I’m so excited to see him this fall, to build off him and what he can do.”

Pleasant surprise
Haynes has filled a need along the defensive front after falling into the Rebels’ proverbial lap during the 2014 recruiting cycle.

Originally a part of North Carolina’s signing class in 2013, Haynes didn’t clear admissions at UNC and instead spent a season at Fork Union Military Academy, where he piled up 16 sacks. A friendship between UNC coach Larry Fedora and Ole Miss assistant athletic director for high school and junior college relations Barney Farrar — Farrar spent time on Fedora’s staff at Southern Miss — put Haynes on the Rebels’ radar, but South Carolina was also involved.

“It was like me getting recruited all over again,” Haynes said. “It was either Ole Miss or South Carolina.”

Distance made all the difference for Haynes, who hails from Jacksonville, Florida.

“I like to adventure when I travel, so I just don’t want to have just like a six-hour or four-hour drive from Florida to South Carolina,” Haynes said. “I wanted to travel, adventure, sightsee and see things I never saw before. And I have.”

Haynes has made frequent trips into opponents’ backfields, and another productive season could leave him with the option of heading to the NFL early. But Haynes has more he wants to do before possibly entertaining the thought.

“I’m also going to be focused on my teammates and stuff,” Haynes said. “My d-line, they’re going to want me to go get the record, but at the same time, we’re going to keep working together to make sure I achieve that goal.”