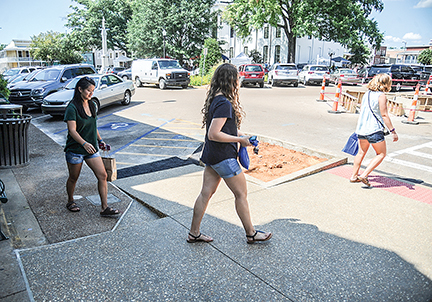 Bruce Newman Improvements for ADA accessibility on the Square have been made and are still in progress.

Oxford often shines as the jewel of Mississippi, being considered more progressive, more pedestrian friendly and having some of the best schools in the state.

Thanks to the work of the Mayor’s Commission on Disability Issues, the Board of Aldermen and the city’s American’s Disabilities Act officer, Oxford is quickly becoming known as the most accessible city in the state.

Currently, underway is the city’s latest ADA project where ramps and sidewalks are being added to intersections around the downtown Square. The city budgeted $80,000 for the project; however, Public Works Director Bart Robinson said the project will finish under budget, leaving about $25,000 left over for more upgrades in other areas of the city.

Robinson said contractors have completed three out of the 13 ramps being built on the Square.

“We have limited the times and days they are allowed to work because of traffic and football season,” Robinson said Friday. “We will use the remaining $25,000 in various areas around town to either correct, install or improve accessibility.”

Prior to being hired as the city’s full-time ADA compliance officer, Judy Pettit was the city’s ADA consultant on a contractual basis since 2011. Having someone on staff who knows the ADA has helped move Oxford forward on disability and accessibility issues, Pettit said.

“I’ve seen a major change in Oxford,” Pettit said Friday. “Not only by the city, but local businesses trying to become more compliant as well. And it’s only going to get better.”

Pettit’s job includes going to businesses and public buildings to inspect them to make sure they meet the ADA code.

“If we get a complaint, I try to work with the business and figure out what’s wrong and how they can fix it,” she said.

“But to tell you the truth, we don’t get a lot of complaints.”

Pettit said Oxford is one of the most accessible cities in the state. While there’s no official ranking of ADA compliance, Pettit based her opinion on experience and knowing what other cities are or are not doing when it comes to disability concerns.

The city took a major step forward in making Oxford more accessible in 1997 when the Mayor’s Commission on Disability Issues was formed; however issues still remained in the city. In the last five years, most city-owned property has been brought up to code.

“We’re really excited about all the work being done on the Square,” Pettit said. “Our (Mayor’s Commission on Disability Issues) is to continue to do that all over Oxford. Sidewalks are often the only way someone in a wheelchair can get around. Everything can’t be done overnight, but we’re working on it and good things are going to happen.”

Stacey Reycraft, chairman of the Commission on Disability Issues, said a new program is close to being kicked off that will celebrate local businesses that are accessible to people with disabilities.

“We want to recognize those businesses who understand that all members of the community should enjoy all parts of the city,” she said.

Businesses will be able to nominate themselves, or individuals can nominate a business to be recognized. After the business is inspected to make sure it is truly accessible, the business will receive a certificate and an Access Oxford sticker to put on the door to notify residents and visitors that they are an accessible business.

“We’re waiting for the stickers to come in, which should be soon,” Reycraft said. “We’ve already chosen three businesses to be recognized, but we aren’t quite ready to announce the names.”

Reycraft agrees with Pettit that Oxford is the most accessible city in the state.

“No other city is so conscious in its attempt to make things more accessible,” she said. “Having Judy working for the city has made all the difference. It’s thanks to her on how far we’ve come.”

Reycraft said once Access Oxford gets implemented, the commission is looking forward to its next project, which will be trying to work with local taxicab companies to help create some accessible transportation options.

“We’re thinking about something like having tax incentives for renovating vehicles,” she said.

Earlier this summer, the Oxford Board of Aldermen passed an ordinance requiring businesses to have the required number of parking spaces.

“It’s always been an ADA law but now the city has made it part of its city code,” Reycraft said.