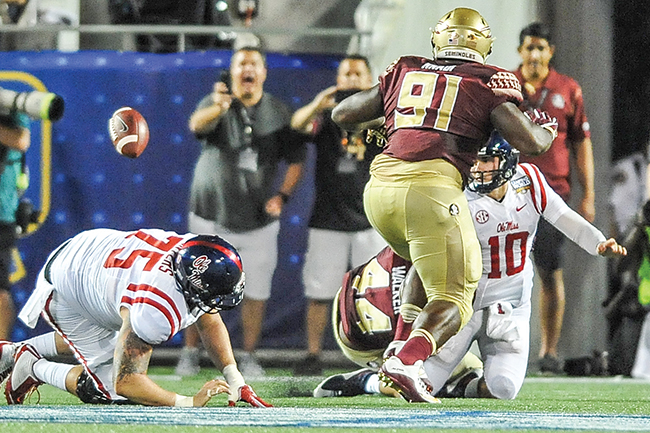 Deondre Francois threw for 419 yards and two touchdowns in his first collegiate start, and No. 11 Ole Miss was on the wrong side of 33 unanswered points as the fourth-ranked Seminoles pulled off the biggest comeback in school history with a 45-34 win Monday at Camping World Stadium.

Ole Miss (0-1) used a fast start to go up 28-6 late in the second quarter, but Florida State steadily climbed back in it behind Francois, who gave the Seminoles some life with a 16-yard touchdown pass to Travis Rudolph just before the half and stayed hot throughout to help Florida State hand Ole Miss its first season-opening loss in Hugh Freeze’s tenure.

“I really thought things started to turn a little bit on the last drive of the first half,” Freeze said. “We blew a coverage there. … (Florida State) came out of the locker room with a lot more life.”

Ole Miss quarterback Chad Kelly did what he could to match his counterpart when he had time, throwing for 313 yards and four scores. But the senior also threw three interceptions and lost a fumble, two of those turnovers coming on consecutive possessions early in the third quarter that resulted in back-to-back touchdowns that gave Florida State (1-0) a 29-28 lead it never lost.

Francois’ 2-yard scoring toss to Ryan Izzo on the Seminoles’ next possession continued the onslaught for Florida State, which had 213 yards to Ole Miss’ minus-7 in the third quarter. Kelly’s protection broke down as the game wore on with the Seminoles recording five sacks.

“Those two turnovers in the third (quarter) really hurt us,” said Ole Miss tight end Evan Engram, who had nine catches for 121 yards and a touchdown. “Hurt our mentality, hurt our drive and hurt the defense a lot, too. It just went downhill after then.”

Ole Miss held Cook, Florida State’s Heisman hopeful, to 95 yards on 23 carries but had no answer for Francois, especially without cornerback Ken Webster, who was carted off the field in the first quarter with a knee injury.

“We might have lost a little focus with our alignment and our assignment,” linebacker Terry Caldwell said.

Against an Ole Miss secondary that started a freshman (Myles Hartsfield) and a sophomore (Zedrick Woods) and rotated in another freshman (Jalen Julius), Francois made strong throws while taking advantage of soft coverage at times to help Florida State convert half the time (9 of 18) on third down. He also kept some drives alive with his legs, running for 59 yards on nine carries.

“It’s something we’ve got to look at for sure,” Freeze said of the coverage. “It wasn’t very fun for me to see some of the technique we had when we ran off coverage. We’ve got to get that looked at and corrected.”