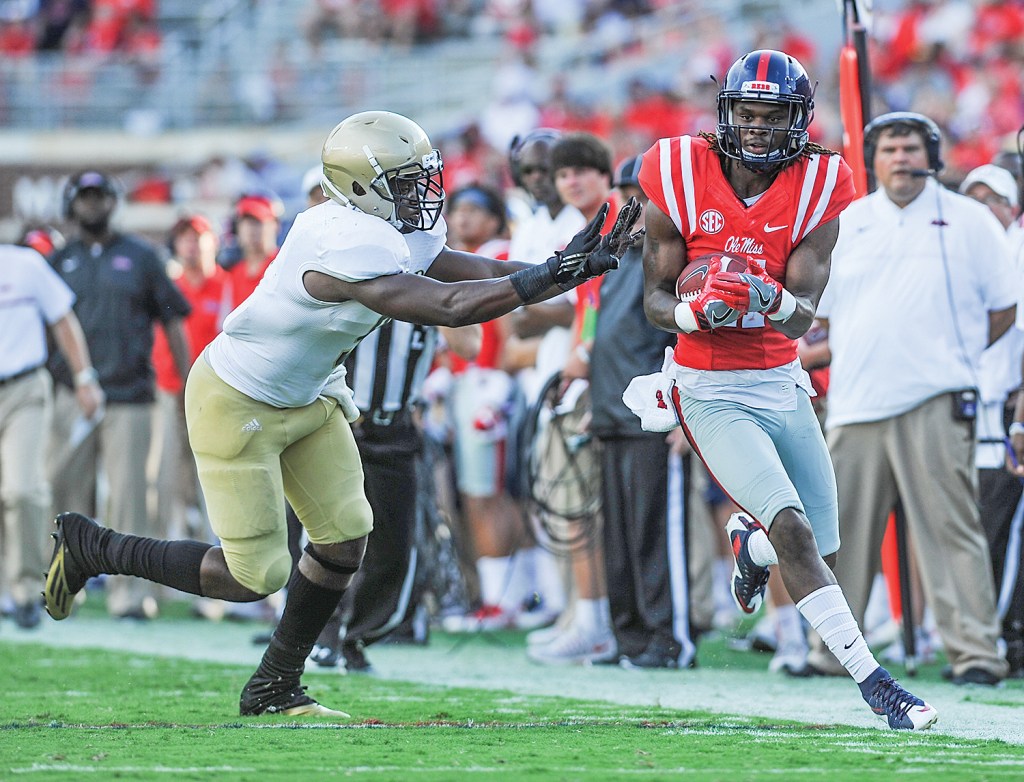 Ole Miss receiver Markell Pack (11) is run out of bounds by Wofford safety JoJo Tillery (3) at Vaught-Hemingway Stadium on Saturday. Ole Miss will take a No. 19 ranking into this week's game against No. 1 Alabama. (Bruce Newman)

Ole Miss’ game against defending national champion Alabama will be another top-20 showdown.

The Rebels remained at No. 19 in this week’s Associated Press top 25 released Sunday while Alabama held on to its No. 1 ranking. Ole Miss (1-1) picked up its first win Saturday with a 38-13 victory over Wofford.

Ole Miss moved up one spot to No. 17 in the Amway Coaches Poll.

Saturday’s game will kick off at 2:30 p.m. from Vaught-Hemingway Stadium and will be televised nationally on CBS. Ole Miss is looking for its third straight win over the Crimson Tide after ending a 10-game losing streak in the series in 2014.

Nick Saban’s team has won its first two games against Southern Cal and Western Kentucky by a combined score of 90-16.

“We’ve got our hands full, but it’s a great opportunity,” Ole Miss coach Hugh Freeze said following his team’s win Saturday. “It’s not one that we’ve been afraid to take on before. We kind of relish that opportunity. I have no idea how it will go, but we’ve got them at home.”

Following Alabama in the top 5 are No. 2 Florida State, No. 3 Ohio State, No. 4 Michigan and No. 5 Clemson, which fell three spots after an unimpressive 30-24 win over Troy on Saturday, while Houston, Stanford, Washington, Wisconsin and Louisville round out the top 10, respectively.

No. 23 Florida and No. 24 Arkansas, which beat then-No. 15 TCU in overtime Saturday, entered the poll to give the Southeastern Conference eight ranked teams.