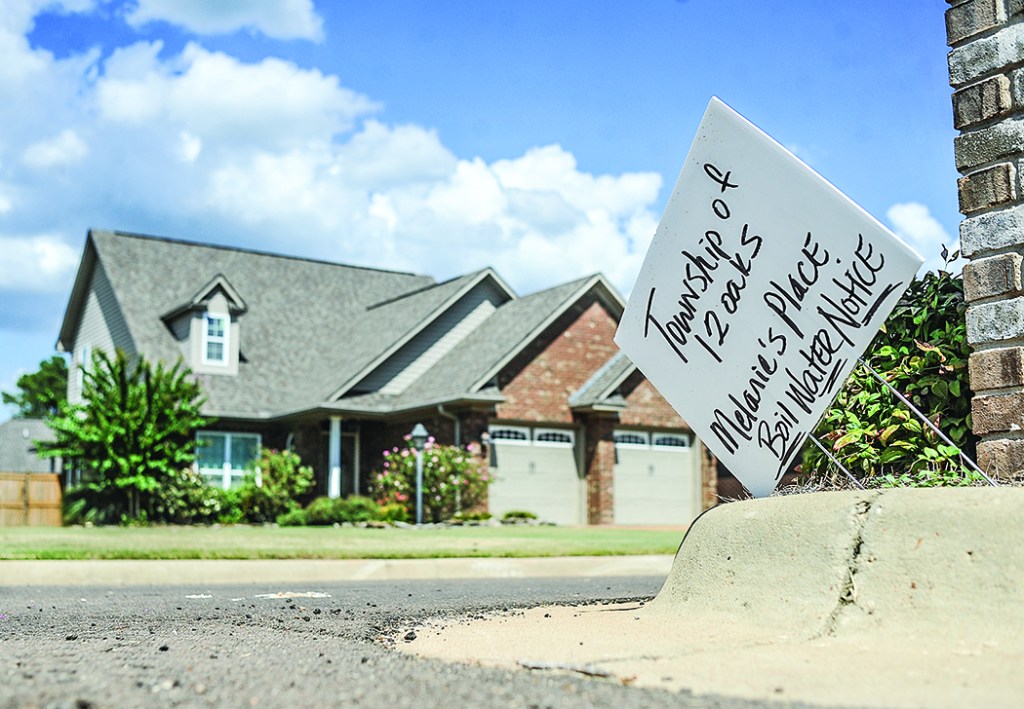 And now Billy Westbrook, the owner and operator of the subdivision, has been denied approval for the next phase of the development.

Supervisor David Rikard, whose district includes Twelve Oaks, pointed out during Monday’s meeting that there have been 14 documented water line breaks since April and that the water system has a 1.7 out of 5.0 rating with the Mississippi State Department of Health.

“We have to do a better job than this,” Rikard told Westbrook. “Fourteen outages in five months is unacceptable.”

Over the last several months, as the Twelve Oaks Estates subdivision has been undergoing the next phase of expansion, residents have voiced their concerns to county officials and now the state is hearing from residents who have been upset with low water pressure, no water and not being notified of boil water notices when there is a line break.

“We have had five complaints filed against this water association within the last two months,” Brenda Williams with the office of Public Service Commissioner Brandon Presley wrote in an e-mail last Friday to The EAGLE. “We are following protocol as usual with these type of complaints and an investigation is ongoing. These have been forwarded to the Public Utility Staff in Jackson and they are looking into the matter as well.”

Six hours after that e-mail was sent, The EAGLE received a fax from the Mississippi State Department of Health to inform customers of the water association a Boil Water Alert had been issued for Twelve Oaks Water System.

“This is due to recent losses of pressure and line breaks, some of which are caused by ongoing construction,” the e-mail states.

On Monday, Westbrook went before the county board of supervisors seeking final plat approval for the next phase of the subdivision, which includes 26 lots along Atlanta Avenue and would add 13 new homes to the subdivision. He was met with opposition from residents, as well as supervisors.

“I want to make a public apology to residents in Twelve Oaks we serve water to,” Westbrook said. “We do have water problems. The system has grown from more than a one-horse operation. But we have completed emergency water service and have connected to the city of Oxford water service as of today.”

Westbrook also informed those at the meeting he is in the process of getting the water system connected to an answering service that residents can call when there is a water system issue. He also said there is a planned meeting with residents on Thursday at the College Hill Community Center to explain the ongoing efforts to correct the issues.

Twelve Oaks resident Kate Ruse was among those who encouraged supervisors to deny the plat approval until the water issue is resolved. She said residents have filed a formal complaint with the PSC against the water system.

“Clean water is a necessity,” Ruse said. “It is a public right as people to have clean water for the modern world, which I believe Lafayette County is. I am asking you to put a halt to this. Listen to us and stop this construction until Westbrook Construction can effectively give notice when there is a line break.”

Ruse asked that the county develop Robo calls to notify residents of water line breaks and placing notification door-to-door when there is a boil water alert.

“This is a real issue and I hold each of you accountable to us in this basic right of guaranteeing clean drinking water,” Ruse said. “For once, put the residents ahead of the developer. I am pleading with you to put a halt to this until these issues can be addressed.”

District 4 Supervisor Chad McLarty responded to Ruse, informing her that the board does not have the authority to monitor water systems and guaranteeing water 24/7 is next to impossible.

“There are a lot of people out there digging and I’m not saying he hasn’t done everything in his power, but we just don’t have jurisdiction over the water systems,” McLarty said.

Rikard admitted the board does not have authority over the water system, but “we also have regulation over public safety and at this point, I don’t believe their best interest is at the forefront all the time.”

Rikard made the motion to table the plat “until you can get the water to where it needs to be.” It was seconded by Mike Roberts and passed with McLarty voting nay.

Rikard was hoping to get an update on the situation at the board’s next meeting set for Monday morning at 8 a.m.