Can Ole Miss (or anybody) beat No. 1 Alabama? 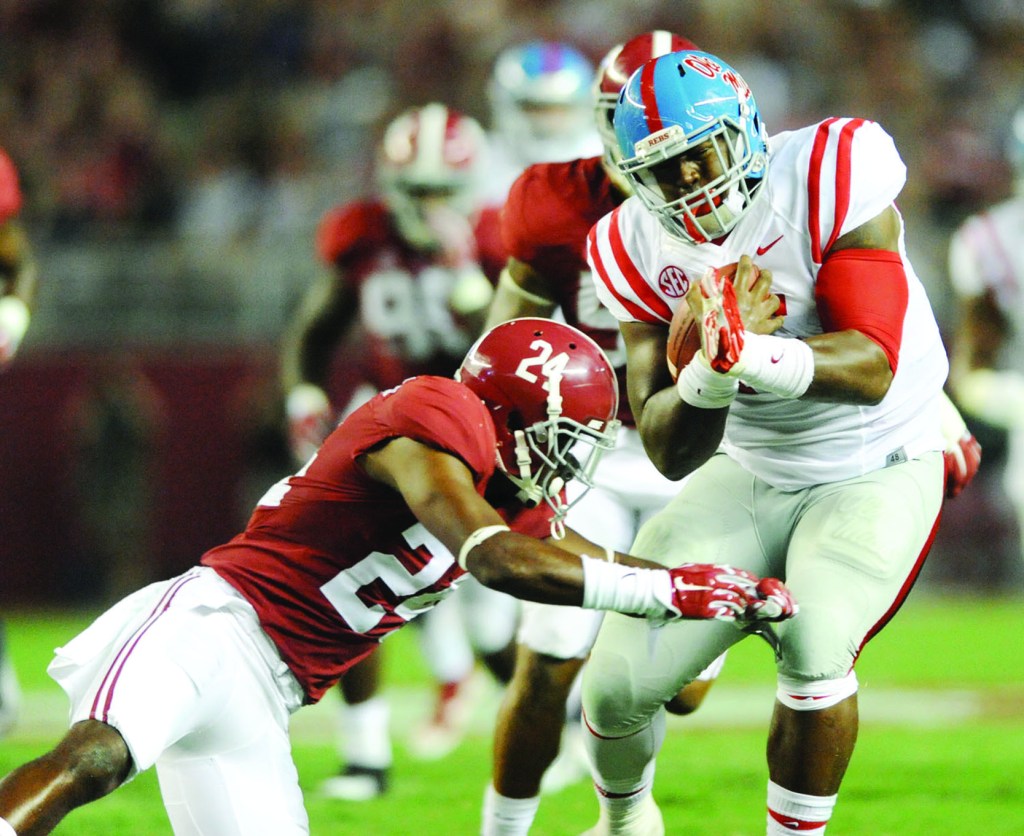 If anything, it’s getting wider.

While every other team in the SEC either already has lost a game or had a relatively close call, No. 1 Alabama (2-0) has outscored its first two opponents 90-16 and is still finding things it could have done better .

“It’s the Bama way,” Alabama tight end O.J. Howard said. “It’s just the way that we carry ourselves. We are a hard-nosed football team. We want to play at our standard that makes people not want to play us anymore, and I think we didn’t play that way Saturday. So it’s a disappointment right now.”

The seemingly widening gap is also disappointing for the rest of the league.

A test of Alabama’s superiority comes Saturday when it opens SEC competition at No. 19 Mississippi (1-1), the one team that seems to have the Crimson Tide’s number . Alabama is 0-2 against Ole Miss and 28-1 against all other opponents since the start of the 2015 season.

“I have great respect for (Alabama coach Nick Saban) and the job he’s done,” Ole Miss coach Hugh Freeze said. “They just continue to stockpile depth with four- and five-star kids. It’s very difficult to say that you’re ever going to overcome the gap. I think we’ve closed it considerably. Obviously, the proof is on the field.”

No one in the league is conceding anything to the Crimson Tide. In some respects, the SEC looks as deep as ever with eight of its 14 members in this week’s Top 25 .

“The SEC’s the SEC,” Tennessee defensive tackle Kendal Vickers said. “It’s why everybody wants to come to the SEC. It’s the best conference in the world. You’ll see when SEC play comes. You’ll see all the talent that comes out.”

But a closer look at the poll indicates Alabama is indeed separating itself from everyone else.

Alabama, which has won four of the last seven national titles, is the only SEC team ranked 14th or higher. That also was the case in the last two regular-season polls in 2015 before Ole Miss climbed to 10th in the final rankings.

“I think there’s a little bit more of a gap, especially based on what we’ve seen the first two weeks,” said SEC Network analyst Marcus Spears, who played at LSU from 2001-04. “They seem to be the only team that hasn’t struggled to get wins. I think for the most part, though, it’s just so early. You’ll see teams get better.”

All the ranked teams other than Ole Miss and LSU are undefeated but haven’t been dominant.

Tennessee was taken to overtime by Appalachian State and erased an early 10-point deficit against Virginia Tech . Georgia eked out a two-point victory over Football Championship Subdivision program Nicholls. Texas A&M beat UCLA in overtime. Florida only led Massachusetts 10-7 through three quarters before pulling away for a 24-7 victory. Arkansas owns a one-point win over Louisiana Tech as well as an overtime road upset of TCU .

Spears believes Alabama’s top challenger is “probably Texas A&M up to this point.” He also mentioned Tennessee and Florida, though he noted the Volunteers need to let quarterback Joshua Dobbs “use his athleticism like they did against Virginia Tech when they started having success and not try to make him a pocket passer.”

While there are questions about all the other SEC contenders, Alabama appears to have solved its biggest preseason concerns. Damien Harris has taken over for Heisman Trophy winner Derrick Henry and has averaged 9.1 yards per carry. Freshman quarterback Jalen Hurts has seamlessly replaced Jake Coker.

Alabama has signed the nation’s top recruiting class each of the last six years, according to composite rankings of recruiting websites compiled by 247Sports. That gives Alabama an edge in talent that can be difficult to overcome.

“Your depth chart may not be on the even playing field,” Freeze said. “But if you have a two-deep who are good enough to play and you get the right system and the right plan that has a chance to be successful against them, I think you have a fighting chance. I’ll know more about that after Saturday.”

As will the rest of the league.