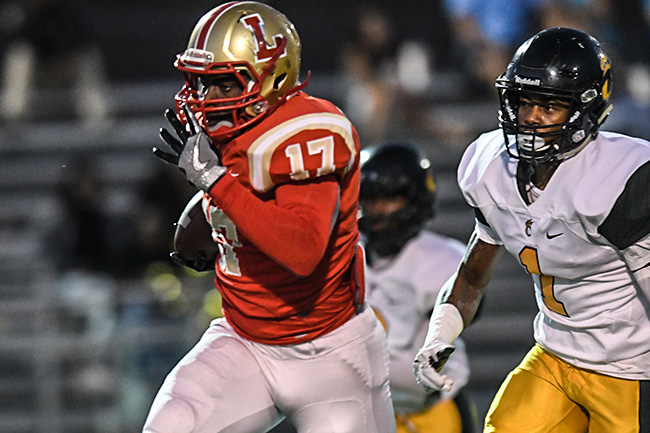 In the eyes of head coach Michael Fair, the Lafayette High football team has not put together a complete four-quarter game yet. For the past three weeks, that has been enough.

It was a combination of an explosive first half and a second half where Lafayette (3-2) did just enough to keep the Tigers (4-2) at bay.

“We challenged them all week to come out of the gates and play hard and fast and they did that,” Fair said.

After punts by both teams on their opening drives, Lafayette needed only two plays to strike first, using a 58-yard run by Quarles for the 7-0 lead early in the first quarter. The Commodores’ defense then stuffed a fake punt by Charleston and cashed in with a 42-yard touchdown pass by Ard to Brandon Turnage on the very next play. Another Ard touchdown, this time to Tyler Williams for 20 yards, and two field goals by Robbie Langley of 27 and 46 yards, respectively, gave Lafayette a 27-0 lead at halftime.

Ard finished the first half 5 of 10 for 92 yards and the two touchdowns while Quarles had eight carries for 120 yards and a touchdown.

“First half, I thought we really did well up front on the line of scrimmage,” Fair said. “Second half, (Charleston) really stacked the box, and to be honest, I got a little conservative with the lead like we all do.”

Charleston is known to be a running team, and for the first half, the Commodores’ defense was up to the task. The Tigers were stifled, rushing for 27 yards. The Tigers had two drives of eight plays and one drive last six plays in the first two quarters.

“I thought our defense stayed strong,” Fair said. “I thought we missed too many tackles, but we’re playing against a really good, running football team. Those backs can go. We’ve got some work to do, but effort wasn’t a problem tonight.”

The offense picked up for Charleston in the second half, scoring all 21 of its points in the final 18 minutes of the game. Quarterback Tre Truly hit running back Billy Kimble for a 24-yard touchdown pass to avoid the shutout with 6 minutes, 14 seconds left in the third quarter.

Kimble was not finished as he accounted for all three touchdowns. The last two scores came on the ground with runs of 13 and 27 yards, respectively.

With Charleston cutting the deficit to 27-14, Lafayette put together a seven-play scoring drive capped by a 5-yard run by Shaw with 8:40 remaining for the winning margin.

After starting the season 0-2, Lafayette has rattled off three straight wins over Oxford, Louisville and Charleston. All three were playoff teams a season ago with two of them playing for state championships.

With Lafayette entering Region 2-4 play next week at Ripley, the Commodores are trending in the right direction and have their non-region schedule to thank for it.

“The schedule’s been brutal,” Fair said. “It has forced us to do some things early in this season to get us ready for district play. … The schedule’s made us better. We’d have gotten embarrassed in a couple of them if we didn’t have things just right.”