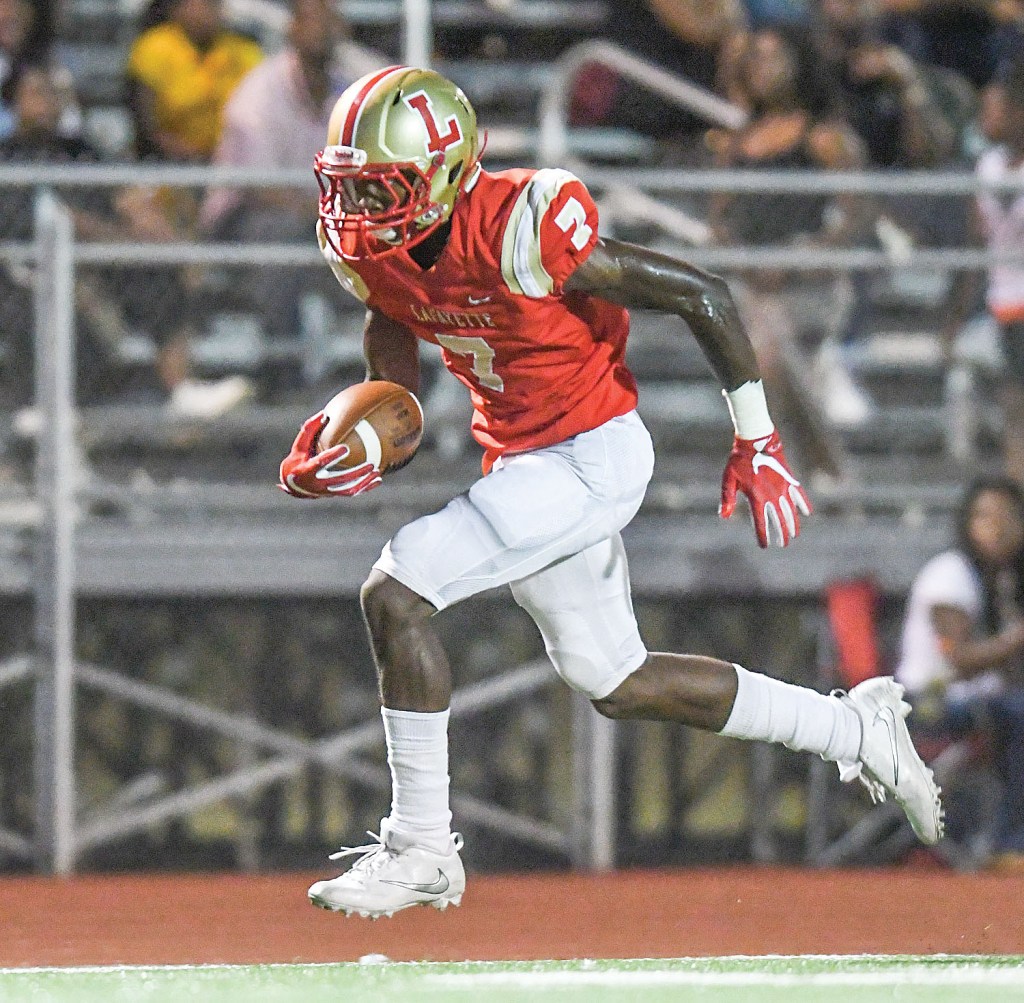 Lafayette’s Brandon Turnage (7) and the rest of the Commodores will go for their fifth straight win tonight against Rosa Fort at William L. Buford Stadium. (Bruce Newman)

Winners of their last four games, Lafayette is in a groove and playing some of their best football of the season. Head coach Michael Fair and his team are itching to get back on the field. Lucky for them, they do not have to wait as long as usual.

With fall break coming this weekend, the Commodores (4-2, 1-0 Region 2-4A) moved their homecoming game with Rosa Fort (1-5, 1-0) up to tonight (7 p.m., 105.1 FM) from the usual Friday night. The move did not affect the practice routine, but Fair and his staff did hit the game planning and film watching a little earlier than usual to get his team ready.

“We tried to cram a lot in the last couple days,” Fair said. “We definitely get our game plan in and feel like our kids will be successful, but we’re at the part of the season where we can work on a lot of fundamentals. The deal this week, with it being a short week, is don’t sacrifice fundamentals for game planning.”

Fair kept the weekend schedule as it usually is and just hit the ground running on Monday’s practice. With the team in the midst of a four-game winning streak, it has helped the morale and energy stay at a high level with putting a little more work into their practices the first part of this week.

“We’ve got some confidence now, which is a good thing,” Fair said. “We also have to continue to remember what got us on this little streak we’ve got going. They’ve responded really well to whatever we’ve asked them to do.”

Lafayette is rolling into the shortened week after winning their region opener 28-14 at Ripley. It was slow going for Lafayette, scoring only one touchdown in the first half which came off a pick-six by Brandon Turnage. When Fair turned on the film, he was pleased that what he saw was different from what he did on the sidelines.

“It was a slow start, but I did see a lot of effort and to be honest with you more effort than I thought I was going to,” Fair said. “It was just some execution on both sides of the ball. We gave up some short passes, and that was partly due to what defense we were in.”

Coming off a 2015 campaign where they lost only three games, Rosa Fort has struggled, losing their first five games of the season. They were able to knock the zero off the win column last week, beating Byhalia 34-18 in both teams’ region opener. Last year, Lafayette traveled to Woodrow Clark Stadium in Tunica and defeated a then 6-0 Rosa Fort team 30-7 for their first loss of the season.

“They got a lot of team speed,” Fair said of the Lions. “Their record doesn’t mean that they’re not talented. They’ve had a hard time getting some things going, but they did win their first game last week. They’re riding an emotional high as well being undefeated in district play. I expect them to give a lot of effort, but they do have a lot of talent.”