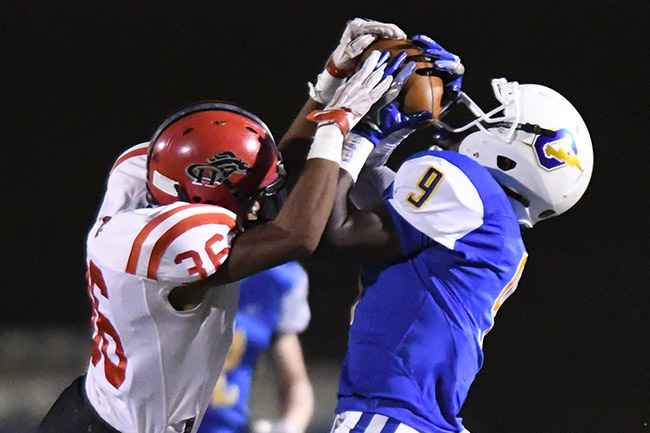 Senior running back Jaquavious Lloyd was looking to finally get into the end zone for the first time in his Charger career. He had carried the ball on the two previous plays, but each time the defense swarmed through the offensive line and brought him down before he could reach pay dirt. Now, on 4th-and-goal from the one yard line, Brown had his final chance. He took the handoff to the left and was again met before the line of scrimmage but kept churning his legs until he finally fell victoriously into the end zone.

It was senior night when the Oxford Chargers faced off against the Center Hill Mustangs on Friday, making the Chargers 49-18 win a little more special.

“What’s so great to see is Jaquavious Lloyd scoring his first career touchdown and seeing how excited all of his teammates were to see him get in the end zone,” head coach Chris Cutcliffe said. “That’s the cool thing that you see is how happy they are to see their teammate succeed.”

Cutcliffe’s team has gotten hot at exactly the right time. Since starting the season at 2-3 with a couple of tough losses to Lafayette and West Point, the Chargers (7-3, 5-1 1-5A) have been on a tear, winning their last five games.  Over that span, the offense has averaged 39 points a game and the defense has allowed an average of just 11 points per game.

“I was pleased with how we played, I thought we came out both halves with intensity and started them off the right way,” Cutcliffe said.

The Chargers broke out on a 22-0 run to begin the game before Center Hill (2-8, 1-5) was able to put six points on the board right before halftime with a long passing touchdown. On the first play of Oxford’s second half opening drive Lance Stewart raced 54 yards to the end zone to extend the Chargers’ lead. Center Hill struck back on the very next possession with a 50-yard passing touchdown of their own.

After that score, the Charger defense woke up, with Quentin Wilfawn recoving a fumble to stop one drive and CJ Terrell intercepting a pass to stop the next one. At the end of the third quarter Wilfawn made his presence known again by taking a 20-yard interception back to the house for a pick-six. The Chargers were in control after that and only allowed one more score late in the fourth quarter.

“Defensively forcing some big turnovers in the 2nd half and Quentin Wilfawn scoring was great to see,” Cutcliffe said.

The Chargers were great on offense, with John Reese McClure throwing for 273 yards and four touchdowns on 18/26 passing.

“I was pleased with our passing game, especially in the first half,” Cutcliffe said. “We had some guys step up and make some big plays at receiver, John Reese played well.”

On the receiving end of two of those touchdowns was Jaquan Webb, who broke out to have his best game of the season, catching four passes for 84 yards and the two scores.

Cutcliffe said a multitude of factors lead to the team’s recent turnaround.

Next week, the Chargers will take on Lake Cormorant in both team’s regular season finale with the No. 2 seed in 1-5A up for grabs. The game will be at Lake Cormorant