Young filmmaker tries to break out 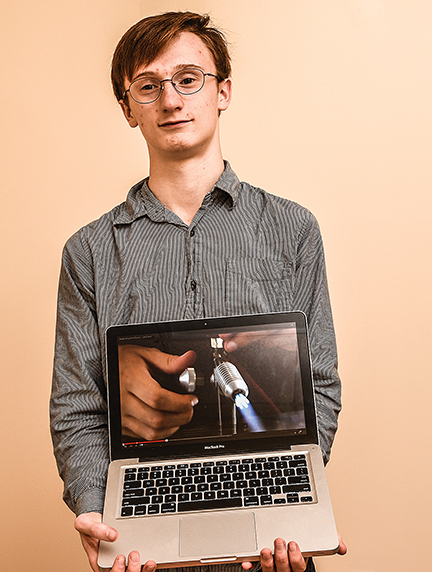 Bruce Newman Tony King, an Oxford High School senior, is looking to become filmmaker and recently filmed and produced a commercial for the Oxford Maker’s Market.

At 5 years old, Oxford resident Tony King first picked up a camera, and he hasn’t put it down since.

The now 16-year-old senior at Oxford High School is still fascinated by film and has been garnering awards and focusing on commercials for local Oxford businesses.

“I’ve been around the idea of film since a young age,” King said. “Just my view on it has changed. For a number of years I was interested in composing soundtracks, but two years ago, I shifted my focus to writing and directing.”

Last year, a documentary King produced for his school eventually won an award for best independent documentary in the state from the Mississippi Scholastic Press Association at a high school journalism competition.

“I had been making graphics and making a lot of videos already, but it was only then I realized I had an actual talent, and that it wasn’t only my ‘Mommy and Daddy’ that thought I was good,” King said. “At that point I thought, well, if I want to get better, I have to make more.”

King says that as a young filmmaker, his biggest struggle is financial resources for his projects. To make up for the costs, he had the idea to propose commercial concepts for local businesses. King’s knowledge of Adobe graphics products like Premiere Pro and After Effects gave him the wherewithal to edit his own work on top of shooting it. Recently, he successfully finished a commercial for the Oxford Maker’s Market.

“I offered to make a promotional video (for the Market) that I thought would help them get more people informed about the event,” King said. “They graciously accepted and I finally got to make a commercial.”

After graduation, King plans to attend Ole Miss to study film production and media studies as well as English. Eventually, he hopes to direct full-length flicks, particularly dramas and comedies.

“As much as I enjoy watching action and sci-fi, and they would be fun to make, my main focus would be on telling an impactful story rather than coordinating huge billion-dollar fight scenes that currently dominate the world of film,” King said.

For any business inquiries, King can be reached at tonyeking21@gmail.com.