Football, freedom and fight for White House dominated this month

Having already spent hours writing a column that was ready to submit, early this morning the Holy Spirit (to whom I pray to help me write these things) prompted me to change it all and start over.

Our Ole Miss Football team is struggling (Y’all, Chad can’t do it by himself) GO REBELS! Four games to go and we need at least three wins to be Bowl eligible.

Although we are suffering from severe drought (at least at my house) the weather for weeks has been nearly perfect, awesome and healing.

Terrorist attacks continue sporadically and we have to be alert, but we are free to move about at will, to attend sporting events, shop, enjoy our “Camelot” Oxford and Ole Miss, sip a beer with friends, drive or fly wherever, vote, choose to do our own thing (within the law), and especially important to me, go to daily Mass and freely worship our Lord without fear.

This election season has been brutal. My applause to all candidates who have fought an unbelievably long, at times ugly, race to the Whitehouse; talk about endurance!

Because of freedom, we can cast a vote for our choice or not vote at all. But, please vote on Nov. 8 or shut up and let’s move on.

As a “Cradle Catholic,” having attended Catholic School from Kindergarten through High School, taught by Ursuline Nuns, and devout faith modeled by my parents (especially my hero mom “Gert”) I love the Catholic Church.

Had my parents been of another denomination, I am sure I would have loved that as well. And, I have the freedom of choice to change my religion or have no religion at all.

But my faith is a constant struggle even though I attend Mass daily, am involved with our Oxford St. John Church, partake of the sacraments, say my Rosary daily, confession once a month, and do my best to do the right thing — pull your head out of the sand y’all; the devil does not want me or you to do the right thing and will attack our weakness and once that crack has been opened the attacks will come more often and more intensely.

On my first trip to Scotland with then-Scottish fiancée, she said her dad, a retired university professor and ordained Presbyterian minister, “Liked to keep the enemy (me) nearby.” Ha!

I loved her dad (mom, brothers, and yes, her). She also said if asked if I was Catholic or Protestant — I had “A 50/50 chance of getting it right.”

That might still be true here in Oxford, Mississippi and “Bible Belt” but because of freedom and choice; I don’t fear for my life answering that question and thankfully can openly write about it here.

It was not my choice to serve three years in the U.S. Army or a year in Vietnam — a “war” that I frankly did not totally understand, but followed orders and went.

I wonder how many soldiers who fought on both sides during the Civil War did so because they were ordered to and defended themselves, not so much because of ideology, but because the other side was trying to kill them.

War is stupid and the evil one is the cause.

Speaking of choice — you made the right one Ole Miss students so hang in there! 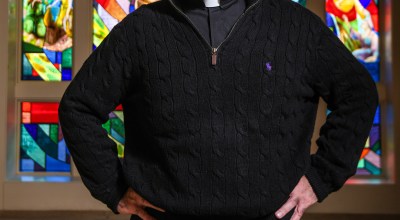 How to recap 18 years with your hero?

Easter in Oxford: Observing the death, burial and resurrection of Jesus