Oxford falls at Lake Cormorant, will be No. 3 seed in 1-5A 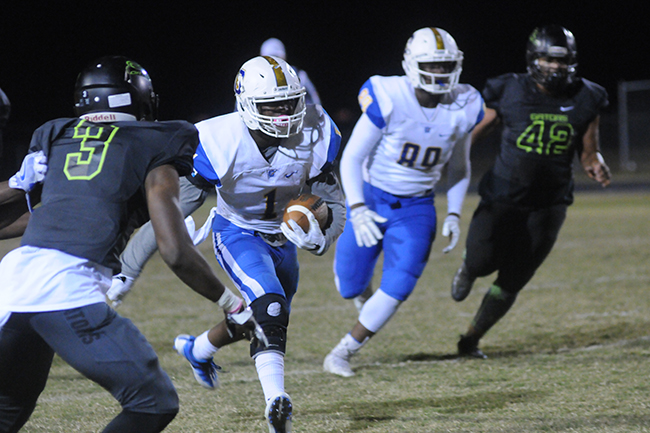 LAKE CORMORANT — The season of uncharted waters continues for Oxford. The Chargers saw their five game winning streak snapped on Friday night in a 31-20 loss to Lake Cormorant on Friday night on the Lake Cormorant High School campus. The win was the first time Lake Cormorant has ever beaten Oxford in the series’ history and also gave the Gators their first home playoff game next week, becoming the No. 2 seed in Region 1-5A with the victory. The loss sends Oxford on the road as the No. 3 seed, where they will travel to Grenada to begin the MHSAA Class 5A playoffs.

Ever since suffering a loss at West Point to begin region play, Oxford (7-4, 5-2 1-5A) has been playing for their playoff lives, in regards to still hosting a first round game. The Chargers essentially could not lose the rest of the way with Clarksdale and Lake Cormorant matching them win for win throughout the season. The plan was working until Friday night when Oxford’s offense was slow to start and the defense held off a potent Gator offense for as long as they could until it proved too much.

“Defensively, we couldn’t have asked those guys to do more,” Oxford head coach Chris Cutcliffe said. “They played their hearts out.”

Oxford looked to be setting the tone early when Lake Cormorant (8-4, 6-1) saw their lengthy 11-play opening drive stalled by an 80-yard pick six from Devin Rockette to put the Chargers up 6-0 after a failed two-point try. The score would swell for Oxford without the help of their offense as DQ Thomas would pick off Lake Cormorant quarterback Will Guest for yet another pick-six by the defense, this one going for 61-yards and a 13-2 Oxford lead with nine minutes left in the first half.

The offense was not able to pitch in during the first two quarters as the Lake Cormorant defense was doing everything to slow down the weapons of Oxford. The Chargers only had the ball four times and only passed midfield once in the first half, getting to the Lake Cormorant 44 before Oxford quarterback John Reese McClure would throw an interception the following play. The first offensive possession for Oxford was ended with McClure getting sacked in the endzone for a safety and set the tone for the rest of the half.

“We didn’t run the ball as well as we have and that’s something we’ve got to look at and address,” Cutcliffe said. “It’ll be hard to see until we see the film but that’s certainly something we’ve to fix before next week.”

Oxford’s running back duo of Hiram Wadlington and Lance Stewart were stymied by Lake Cormorant’s defensive front. The pair combined for 36 rushing yards and zero touchdowns. Wadlington accounted for 23 yards on 10 carries while Stewart picked up 13 yards on the ground. McClure finished the night completing 19 of 32 passes for 167 yards and one touchdown and one interception. Oxford’s lone offensive score of the game came from a six-yard pass from McClure to Jaquan Webb in the third quarter.

Oxford had chances to climb back into the game after Lake Cormorant took a 28-20 lead in the fourth quarter. After driving down the Gators’ 14 yard-line and facing a 4 & 9 situation, Cutcliffe elected to try a fake field goal, which was snuffed out by Lake Cormorant’s defensive front and swatted McClure’s pass at the line for a turnover on downs. Later in the quarter, Oxford had yet another fourth down conversion try, this on a 4 & 2 at their own 29. McClure’s pass would one again be batted down to give the Gators the ball back and eventually the victory after a late field goal sealed it.

“It was something we thought was there,” Cutcliffe said of the decision to try the fake field goal. “Really, the one guy that could’ve possibly made a play, we thought he would rush hard off the edge, and to his credit he saw it and made a great play on it. If he doesn’t tip the ball there’s nobody left out there.”