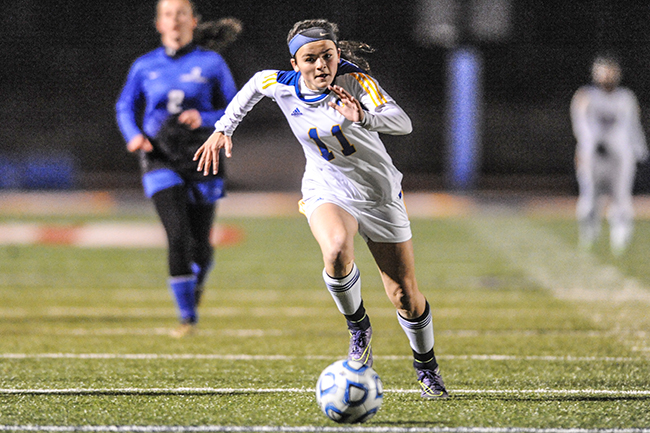 Oxford High's Morgan O'Connor (11) vs. Saltillo in the MHSAA Class 5A North Half playoffs in Oxford, Miss. on Wednesday, February 3, 2016. Oxford won 6-0 to advance to the state championship.

Last year, the Oxford High girls soccer team was under the radar. Nobody had them as the team to beat with a first-year coach who was trying to figure out his team.

Turns out everyone else in Class 5A should have been paying attention as the Chargers went 20-5 and won the program’s first state championship. This year, Oxford is a marked team that expects to find themselves playing for another state title come February and will not have the advantage of lying low.

“A little pressure now,” Oxford coach Hunter Crane said. “For some reason, Oxford always gets everybody’s best shot anyway. That’s kind of who we are now. Last year, we lost five games, but we were in a lot of battles and nobody really overlooked us. But when we show up now, we have the stigma of a target as the defending 5A state champion.”

The possibility of another state title run is there for Oxford as they return over 100 goals scored from last year as well as their entire starting midfield, two forwards, two defenders and their goalkeeper in captain Bailey O’Connor. The offense is expected to run through ninth-grade forward, and Bailey’s sister, Morgan O’Connor. The younger O’Connor broke out as a key threat for Crane during her eighth-grade year, scoring a team-high 27 goals and the winning goal against West Harrison in the state championship game. Even though Morgan is just in the second year of her high school career as a freshman, Crane is not concerned about putting the pressure on her, and she has responded already this year with 10 goals in Oxford’s first two games of the young season.

“Morgan’s special because she does what she does,” Crane said. “The girls know what she can do. Our center midfield is kind of where it all starts for us. Addison Mills, Addison Meadows, Nicole Wilkins and Grace Joyce. They’re where it all begins, and they’re going to try and give Morgan and Ally Shinall the ball and let them do what they do around the net. As far as our offense being built, it all starts around that center midfield.”

Outside of Morgan, Crane is looking forward to seeing how Mills, a junior midfielder, will respond this season after battling some injuries last year. In 16 games played, Mills scored four goals and had five assists. Crane got Mills back at the start of region play and proved vital for the Chargers’ playoff run, scoring one goal in the championship game and recording three assists throughout the postseason.

“I’m real excited about Addison,” Crane said. “Through the playoffs, she was huge for us. … This offseason, she just kind of took it upon herself. She was like, ‘I’m going to go to work everyday.’ You can see it in her play and I’m super excited to see what she does this year.”

Oxford travels to Caledonia on Saturday for a match with the Confederates at 11:15 a.m.