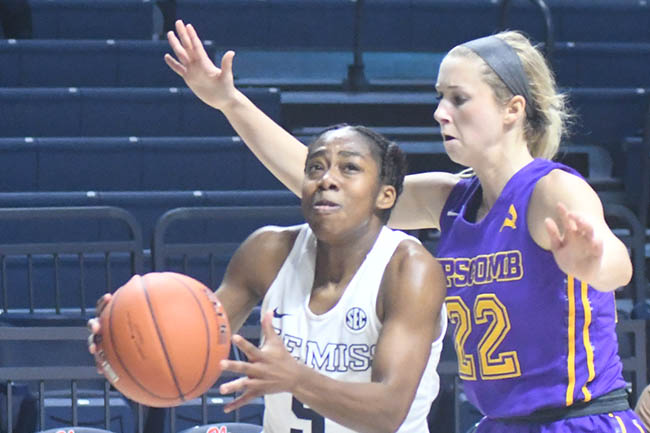 Through the first two games, the Ole Miss women’s basketball team look completely different from last season and that is a good thing. After holding Souteastern Louisiana to 31 points on Friday, a record low for a season opener, the Rebels kept things rolling with a 76-49 victory over Lipscomb inside the Pavilion on Sunday evening.

Ole Miss (2-0) used another fast start, scoring at least 25 points in the first quarter for a second straight game, using Shandricka Sessom’s 12 points to build a 25-9 lead after the opening 10 minutes. Sessom finished with a game-high 26 points, including three three-pointers and made one free throw.

“Just intensity when they know they have to go,” Ole Miss head coach Matt Insell said. “It’s something you see a lot. When it’s close they play extremely, extremely hard. My concern is when we get up pretty good and they kind of start relaxing. As a coach, I have to make sure that that doesn’t happen. The first two quarters as good a team in the country could play. We were just dominant offensively and defensively.”

Inside play was a key focus for head coach Matt Insell and his squad in the offseason and the signings of senior Taylor Manuel and freshman Shelby Gibson have proven useful in the young season. Manuel added eight points along with seven rebounds while Gibson chipped in 10 points and two boards. Ole Miss as a team has 44 points in the paint.

“I just couldn’t be happier with the way our post players are playing,” Insell said. “We got a lot of depth in there. …Taylor Manuel, they were double- and triple-teaming her, but just real proud of how hard she played. She’ll be better. Those two post players are hard to stop.”

The only blemish for Ole Miss was their free throw shooting. The Rebels went 10-for-21 (47.6 percent) at the charity stripe. The Rebels made up for it from behind the arc as they went six-for-21 (28.6 percent) from three-point range.

“None,” Insell said when asked if he had any concerns at the free throw line. “That’s not us and that’s everybody missing there. I have no concern there. We’ll be alright and that’s just something that happens time to time.”

After being held to only 12 points by Ole Miss’ defense in the first half, Lipscomb (0-2) scored 37 in the final two quarters to outscore the Rebels 37-34 in the second half. Freshman guard Kaylee Cotton lead the team with 14 points and three three-pointers of her own.

“The second half we did not play as hard defensively, which bothers me,” Insell said. “I took a couple timeouts to try and get their mind right. It’s not about small picture. It’s about big picture.”

Erika Sisk’s 14 points helped get her closer to a career milestone with Ole Miss. the senior guard, and Oxford native, has scored 21 points thru her first two games of the season and needs only 43 more to reach the 1,000 point threshold as a Rebel.