Ole Miss’ offense has to be ‘excellent’ in red zone 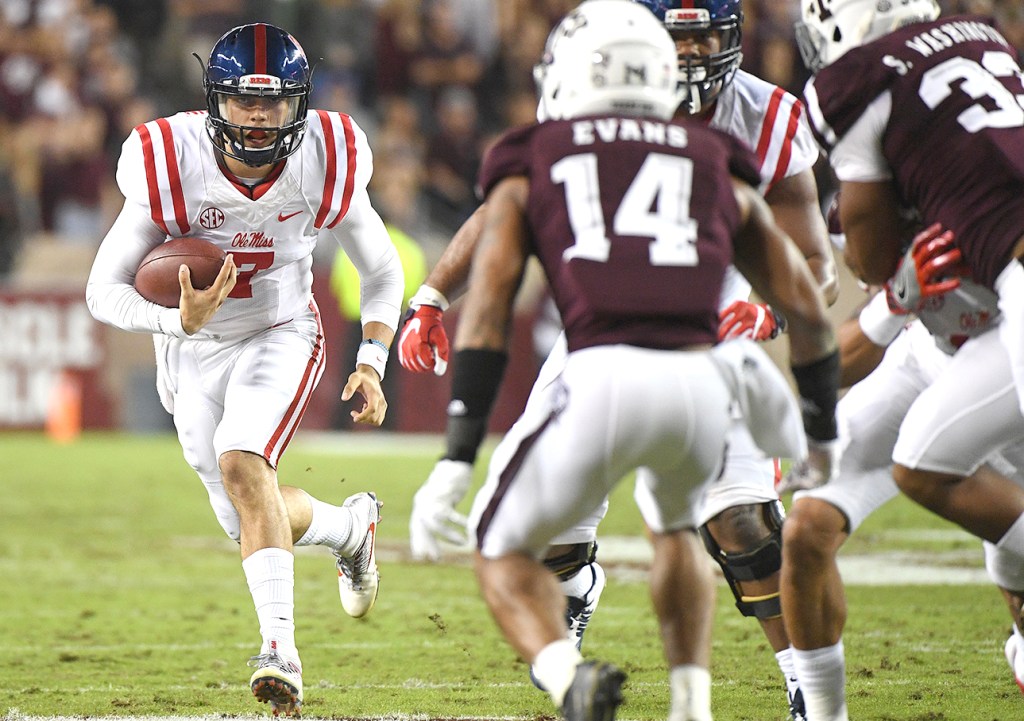 Ole Miss quarterback Jason Pellerin (7) runs with the ball during the first half of an NCAA college football game against Texas A&M in College Station, Texas, Saturday, Nov. 12, 2016. (Photo/Thomas Graning)

The statistics show Ole Miss has been good at capitalizing on its red-zone opportunities.

But head coach Hugh Freeze said he knows his team has to be more than good in those situations.

The Rebels are 31st nationally and third in the Southeastern Conference with an 89.8-percent conversion rate (44 of 49) inside an opponents’ 20-yard line. Their touchdown-to-field goal ratio is better than 2-to-1 (30-to-14), but Ole Miss (5-5, 2-4 Southeastern Conference) is still working to figure out how to best finishes drives in the end zone more often with a defense that’s allowing nearly 32 points per game.

“It’s not that we’ve been bad, but our team needs us to be excellent in the red zone in scoring touchdowns,” Freeze said. “I want to be clear how I define that. If you look statistically, we’re doing pretty well, but our team needs more. That’s my constant harp on that. That’s who we are this year and we’ve got to find a way to be more excellent in the red zone, so I’ll continue this week.”

Ole Miss made four trips to the red zone against Texas A&M last week but didn’t turn any of them into touchdowns until early in the fourth quarter when freshman quarterback Shea Patterson reversed his field to elude pressure and find Damore’ea Stringfellow for a 6-yard score.

That sparked the Rebels’ comeback from a 21-6 deficit they faced at halftime because of points they left on the field. Ole Miss got inside A&M’s 10 on each of its first three red-zone chances but had just two field goals to show for it.

Much like it has all season, Ole Miss frequently put backup quarterback Jason Pellerin in the game the closer it got to the goal line, but the offense stalled. The Rebels had a chance to cut into the 15-point deficit in the third quarter when three straight completions from Patterson gave Ole Miss first-and-goal at the 9, but Pellerin fumbled while being sacked two plays later to end the threat.

Freeze defended the decision after the game to try to catch the Aggies sleeping with the 6-foot-4, 230-pound Pellerin, who’s been used primarily as a runner.

“We had the wheel open and were going to throw a wheel route,” Freeze said. “We missed the back block and he got sacked and the fumble. I didn’t think they’d be expecting the throw. We knew they’d be in bear man, and (tight end) Hunter (Thurley) was wide open if we just had a split second to throw it.”

The playbook is limited with Patterson at the controls, but Freeze said he’ll look at adding more to it this week. Whether that includes an expanded package near the goal line remains to be seen, but Freeze said he’ll continue to evaluate everything ahead of the Rebels’ game at Vanderbilt on Saturday (7 p.m., SEC Network).

The Commodores (4-6, 1-5) are only allowing teams to score 69 percent of the time once they reach the red zone, the third-lowest rate in the SEC.

“One of the areas that’ll be addressed closer in a different way will be the tight red zone because we have to score touchdowns the next two weeks in the red zone,” Freeze said.