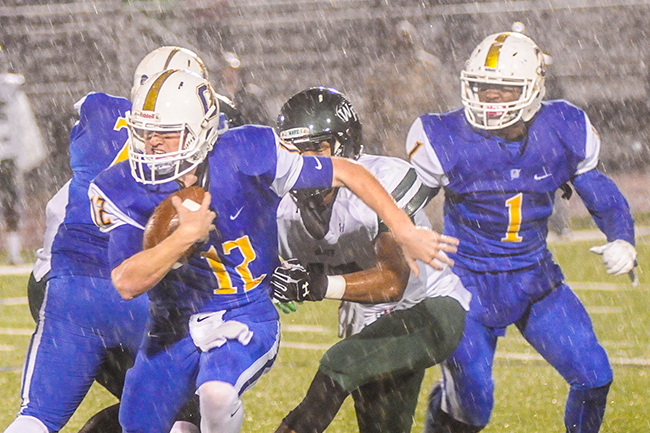 Oxford’s first season under Chris Cutcliffe has come to a close. Maybe a little sooner than they expected but on a frigid, rain-soaked Friday night the West Point Green Wave dominated Oxford in a 41-0 rout in the quarterfinal round of the MHSAA Class 5A playoffs. West Point advances to the 5A north half championship against Lake Cormorant, who defeated Clarksdale 24-13 in the other quarterfinal match up, next week.

The game was delayed 52 minutes as the cold front that was forecasted to arrive on Friday, did not show up to Bobby Holcomb Field until minutes before the schedule 7 p.m. kickoff time. After the extended pre game, West Point (12-1) came out firing on all cylinders. Following a 14-yard opening drive for Oxford (8-5), which resulted in a punt, the Green Wave needed only one play as quarterback Marcus Murphy ran 77-yards for the quick 7-0 lead less than three minutes into the game. It did not take long as four minutes later West Point running back Chris Calvert ran 54 yards for the 14-0 lead.

Things did not go well for Oxford’s offense all night and a sign of things to come came on the Charger’s third possession and quarterback John Reese McClure fumbled the wet ball and defensive lineman CJ Melton was there for the 51-yard scoop-and score and a 21-0 West Point lead one play into the second quarter.

“We obviously gave up some big plays early and got behind quick,” Cutcliffe said. “We moved the ball around a lot better this time around than we did the first time. It didn’t show with any points on the scoreboard, but you’ve got to give West Point a lot of credit. I think they handled the weather and the delay and those things obviously a lot better than we did.”

The first half could not end soon enough for Oxford as their possession the first two quarters ended with a punt, punt, fumble, turnover on downs, punt and the end of the half. Both teams went to their locker rooms to warm up and dry off with West Point leading 27-0 after Calvert’s second of three touchdowns coming late in the second quarter followed by a missed extra point.

Oxford’s defense did their best to keep the score where it was for the offense to try and climb their way back but the third quarter saw nothing but both teams trading punts. Oxford’s second half possessions were not much better as the Chargers were forcing the issue to attempt to create some momentum of their own though West Point’s defense was having none of it. It resulted in four straight drives ending on a turnover on downs and their final drive ending with a fumble with West Point recovered.

“We had some opportunities to put some points on the board,” Cutcliffe said. “We kept ourselves in the game with a chance in the fourth quarter and obviously didn’t capitalize. We just need to finish drives better than we did.”

McClure finished the night with a measly 37 yards, completing 10 of 22 passes in the poor weather conditions that did not let up until moments after the game’s conclusion.  Running back Lance Stewart carried the ball 19 times for 110 yards while Hiram Wadlington was held to 65 yards on 14 carries.

For West Point, Murphy carried it 15 times for 180 yards and two touchdowns while Calvert finished the night with seven carries for 115 yards and his three scores.