Hugh Freeze has decisions to make about his defense 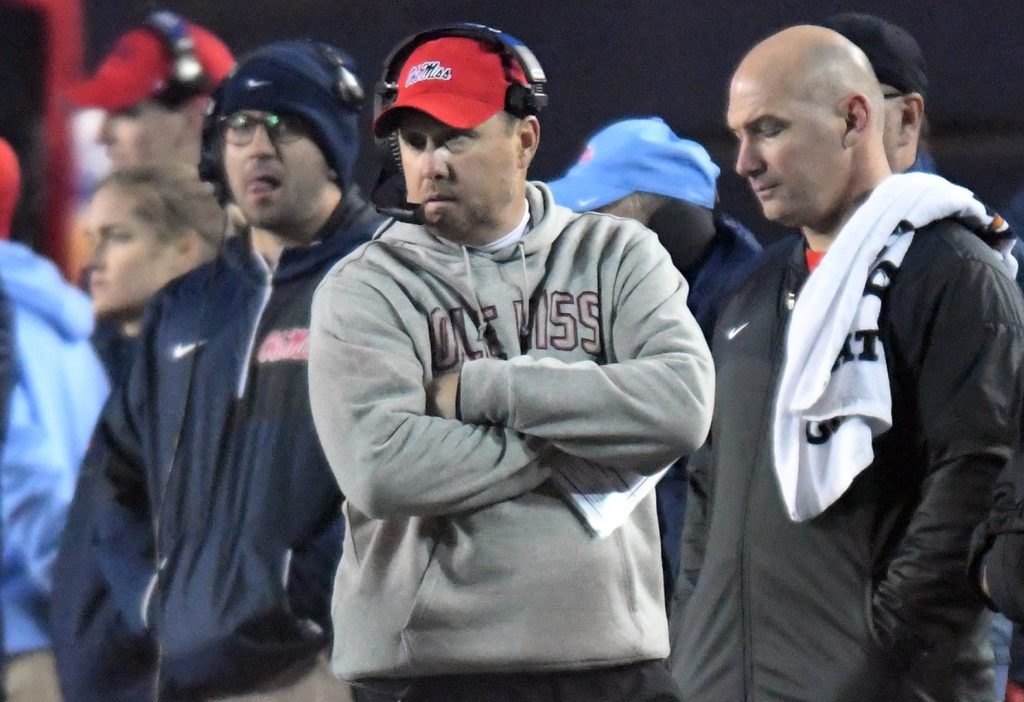 The Rebels went up 10-0 on Vanderbilt in the first quarter then went flat, going eight straight possessions without a point until Shea Patterson’s fourth-quarter touchdown pass to Evan Engram when Ole Miss was down three touchdowns.

That unusual ineptitude from an offense that began the night in the top 3 of the SEC in scoring and passing certainly played its part in the Rebels’ 38-17 clunker of a loss to a team that began the day in the cellar of a bad SEC East, but you can at least understand what happened to the offense.

Patterson is going to be really good, but he was a true freshman making just his second start at this level against what was probably the best defense he’ll see this season. Patterson ran around all night behind the Rebels’ banged-up offensive line and did what he could to extend plays with the Vanderbilt defense throwing all kind of different looks at him, again showing glimpses of the kind of playmaking ability Ole Miss will have at quarterback for the next few years with scrambling touchdown tosses to Akeem Judd and Engram.

The problem is the Rebels again needed to score points in bunches because of the biggest problem this team has: the defense is bad and is showing few signs of improving over the course of a 12-game regular season.

After showing a pulse in the second half against Texas A&M a week earlier, the defense reverted to its old ways to flatline against what’s been one of the worst offenses in the Southeastern Conference this season. Vanderbilt’s 208 rushing yards — the seventh time this season Ole Miss has surrendered at least 200 yards on the ground — were predictable, but a Commodore passing game that’s struggled to even be serviceable this season looked like a juggernaut against the Rebels.

The Commodores began the night last in the SEC in passing offense and total offense, but Kyle Shurmer picked Ole Miss apart for 273 yards, the most Vanderbilt has thrown for in an SEC game this year. Ole Miss gave up Vanderbilt’s longest play all year on a 67-yard pass on a glitch in coverage that’s become nearly as predictable from this secondary, and the Commodores had surpassed their SEC-worst average of 322 yards per game before the third quarter was over and finished with 481, again setting the season-high for Vanderbilt against an SEC opponent.

And those 38 points? Vanderbilt hadn’t scored more than 17 against a league foe before Ole Miss’ defense provided some relief.

It’s gotten to the point where Hugh Freeze has some decisions to make when it comes to his staff on that side of the ball once the Egg Bowl is over. Does he believe defensive coordinator Dave Wommack, who came to Ole Miss with Freeze from Arkansas State, is still the man for the job or does he think it’s time for new energy and a new voice?

Maybe most importantly, does Freeze think he’s got enough help on the recruiting trail?

The subpar play at linebacker and in the secondary are glaring. More than any scheme, it exists because of all the recruiting misses at those positions in recent years.

Robert Nkemdiche, Cody Prewitt, Trae Elston, Mike Hilton, DT Shackelford, C.J. Johnson and Senquez Golson aren’t coming back. Ole Miss has to go get more players like that if it’s serious about competing for championships in the SEC in the future. Is Freeze confident that he has enough help at this point to go get them?

If Freeze is taking a serious assessment of his program a week from now, these are the questions he has to ask himself — and answer.