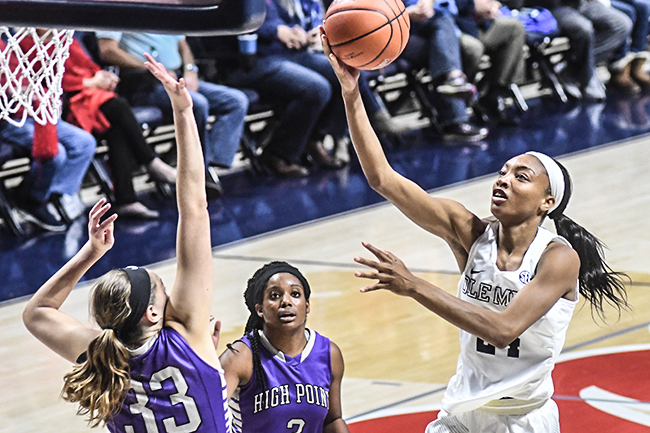 The Ole Miss women’s basketball team had to fight tooth and nail for the victory, but the Rebels came out on top with a 73-62 win over High Point on Sunday afternoon. The win moves Ole Miss to 4-0 on the season – the best start in the Insell era.

The fourth quarter was extremely competitive with both teams battling every single possession. Shelby Gibson completed an old-fashioned three-point play and Shandricka Sessom nailed a triple to give Ole Miss a 66-59 lead with 3:58 left — the largest Ole Miss lead of the game. Ole Miss (4-0) really clamped down on the defensive end of things in the fourth quarter limiting High Point to just nine points, while forcing four fourth quarter turnovers en route to the victory.

Sessom led the way with 18 point to lead all-scorers, while Shequila Joseph (London, England) tied her career high with 10 rebounds. Erika Sisk flirted with a triple-double, falling two assists and two rebounds shy of the milestone.

Sessom came out strong to start the third quarter with five unanswered points as Ole Miss jumped ahead 27-34, but High Point quickly got back in the groove and nailed a triple, but Ole Miss kept on the offensive and with a Lewis triple forced High Point to call an early timeout. Despite the early lead, High Point wouldn’t go quietly and tied the game, 40-40, at the 5:46 mark – the 10th tie of the game.

The teams battled throughout the third quarter much like the first half. Bretta Hart provided some quality minutes off the bench with a season-high six points in 10 minutes.

Ole Miss jumped out to 10-4 lead on the strength of a five early points from Lewis who was making her first start of the season and seventh of her career. Despite an early lead six-point lead, the Panthers used a 4-0 spurt to cut the game to just two points at the first media timeout.  High Point tied the game, but a bucket from Sisk and a trey from Joseph kept the lead with Ole Miss, but it was a tight game, 19-17, at the end of the first quarter.

The visitors tied the game out of the quarter break and it was a back-and-forth affair for the majority of the second quarter, with neither team taking more than a two point lead in the quarter in a half that featured eight ties and four lead changes. Gibson was a spark off the bench late in the quarter with six quick points in the second stanza, but neither team could pull away late as Ole Miss took a slim 29-27 lead into the break.