Lafayette County to give $1M to project 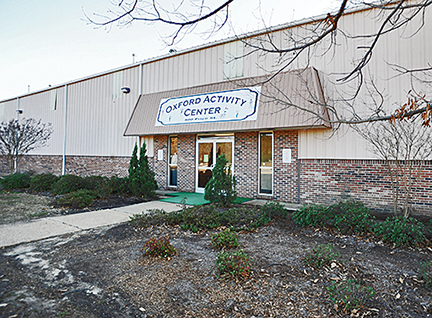 Bruce Newman A new activity center is scheduled to replace the current one in Oxford. County officials decided Monday they would help fund the $7.75 million project.

Lafayette County officials will help contribute to a new activity center in Oxford.

After meeting in executive session during their regular Monday morning meeting, the board emerged to say they have decided to “give the city a million dollars to the activity center,” Board President Jeff Busby said.

Supervisor Mike Roberts voted no in giving the funds to the city.

Last month, Oxford Public Works Director Bart Robinson and Oxford Park Commission Director Seth Gaines went before the Lafayette County Board of Supervisors to seek participation on the project that is estimated to cost $7.75 million.

The City of Oxford has budgeted $7 million and Robinson said they were “looking for some additional funding” for the project in the amount of $1 million.

Robinson gave the supervisors a breakdown of total participation among local residents in programs at the Activity Center.

Gaines said when school is out, there is always a day camp going on at the activity center with participants be placed on a first-come, first-serve basis.

“It functions as a daycare,” Robinson said.

There were also 768 retirees who participated in the Leisure Lifestyle program in 2015 with 95 percent being Lafayette County residents.

After the county was approached by city officials to contribute to the activity center, Busby said there were some other needs the county had to look at first.

The county has been planning to construct some necessary new facilities, in particular a complex on County Road 406 that would house several public services, including the state driver’s license office, extension office justice court and county department of human services. The county recently accepted the Mississippi Department of Transportation’s offer of $1.42 million where the health department, state driver’s license and extension office are located as part of MDOT’s widening of Highway 7.

Now that they have the sale of property complete, Busby feels more comfortable in assisting with the activity center.

“It’s a partnership. I feel like city and county together are all part of Lafayette County and this benefits kids in our community,” Busby said.

But Busby said most of the phone calls he received were from older adults and in particular the Leisure Lifestyles group, which continues to grow with participants.

“They’re out of room and that’s an outlet where they exercise,” Busby said. “So yes, this is good for the kids, but our community needs this.”

Oxford Mayor Pat Patterson is also pleased the county will contribute to the activity center.

“We appreciate the Board of Supervisors partnering with us on this very important project that serves everyone in Oxford and Lafayette County,” Patterson said. “We think it’s government at its finest and we look forward to working with the county on any future projects they may have.”

One of those projects could be combining municipal court and justice court into one facility on County Road 406.

Recently, Busby said the county has had “very preliminary” talks on the combination project.