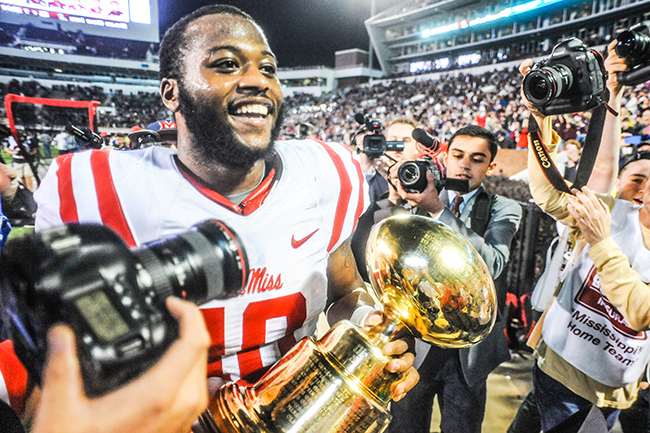 Since 1901, The Egg Bowl has always held a special place in Mississippi football tradition. The annual matchup between Ole Miss and Mississippi State is more than just a game, it’s ingrained in the Magnolia State’s culture.

But what about that golden, egg-shaped statue? Some may wonder how and where it spends its days while waiting for one of the two teams to raise it high.

Langston Rogers, the Special Assistant to the Athletics Director, says that there is little maintenance required on it during the offseason while it sits on display in the Olivia and Archie Manning Athletics Performance Center (after an Ole Miss Egg Bowl win).

“Since the trophy is often taken on the Rebel Road Trip and to other alumni functions, we try to make sure to remove the oils left from any finger prints,” Rogers said. “Alumni and support groups wanting to display the trophy work through Kyle Campbell who handles the schedule and then makes sure the trophy is returned to the Manning Center.”

Rogers added that two years ago, the Golden Egg underwent a refinishing process.

“It had a lot of scratches and a few dents,” Rogers said. “Athletics Director Ross Bjork and then Mississippi State Athletics Director Scott Stricklin both agreed that we should replace the heavy square base with a round base as part of the refinishing process.”

National Awards in Jackson worked alongside Rogers in finalizing the trophy alterations.

“I worked with the company to design the new base to be as close to the original as possible,” he said. “Both schools equally shared the expense to refinish the trophy.”

Rogers says that the importance of the Egg Bowl goes hand in hand with the state’s love of sports in general.

“The winner will have bragging rights for the entire year,” he noted. “There is also great respect among the players. Many of the Mississippi athletes either played on the same high school team or played against each other. Team members from outside the state know full well the importance of the game, no matter what the records may be at the time.”