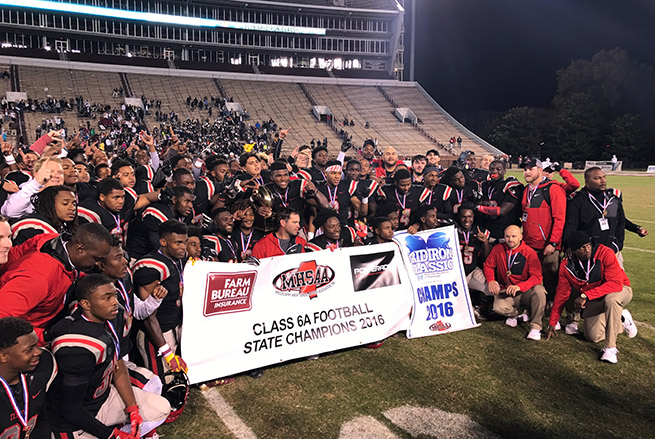 Clinton High football won their first state championship in program history in a 49-35 victory over Pearl in the MHSAA Class 6A state championship at Davis Wade Stadium on the Mississippi State Campus in Starkville. (Jake Thompson)

STARKVILLE — The main event on the first day of games inside Davis Wade Stadium did not disappoint, if only for the play of Clinton star Cam Akers. The senior quarterback put on a display Friday night as Clinton won their first state championship in program history, defeating Pearl 49-35 in the MHSAA Class 6A state championship. Clinton’s 49 points were the second most scored in a 6A title game dating back to the inaugural game in 2009 where South Panola scored 56.

“The feeling is unbelievable,” Clinton head coach Judd Boswell said. “This kids never quit. They get behind in big ballgames, it helped us tonight.”

The predicted shootout took form early as both teams scored on their opening possessions. Pearl would scored on its second but Clinton was the first to blink as the Pearl defense caused a turnover on downs. From there it would become the Cam Akers show. Akers accounted for all of Clinton’s touchdowns. He did it by arm (2) and with his legs (5) and 462 total yards of offense

After the turnover on their second drive, Clinton scored touchdowns on their next six of their final nine possessions.

The Wildcats and quarterback Jo Jo Gray only threw the ball three times all game, but that was all they needed to do. Running back Jessie Nabors racked up 105 of the Wildcat’s 237 yards on the ground. Gray ran for 53 yards and one touchdown.

After jumping out to a large halftime lead, Simmons decided to make things harder for them in the second half but were able to come away with their second straight Class 1A state championship. Simmons defeated Lumberton 30-26 in the first game of Friday’s action.

With a 22-6 lead at halftime, Simmons held off a pesky Lumberton who climbed back to within two points second half. After recovering an onside kick and trailing 30-26, Lumberton had one last chance but were held to a turnover on downs with 36 seconds left to seal the victory for Simmons.

Simmons quarterback Chan Robinson completed six of 11 passes for 99 yards and a touchdown. Running back Marquez Pam had 21 carries for 91 yards and two touchdowns for the Blue Devils.