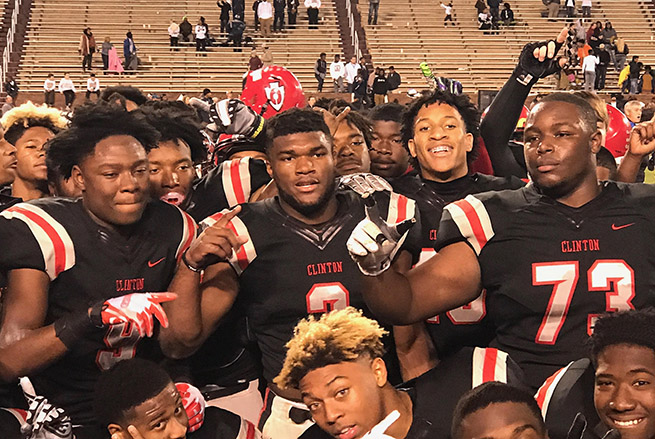 Clinton's Cam Akers, center, accounted for all seven of the Arrows' touchdowns in their 6A state championship-clinching victory over Pearl Friday night at Davis Wade Stadium in Starkville. (Jake Thompson)

The hype is real. Cam Akers is a superstar and he proved it on his final high school game of his career. Akers led Clinton to their first football state championship in program history by putting his team on his back and carrying them to a 49-35 win over Pearl in the MHSAA Class 6A state championship on Friday night.

The senior quarterback/running back/defensive back can do it all and he did just that for Clinton in his final year, earning him national attention at the next level. Every bit of it is warranted.

On Friday, Akers accounted for all seven of Clinton’s touchdowns. Pearl’s defense allowed only 22 points total in their first three games of the postseason. Akers more than doubled that by himself. He ran for five touchdowns and threw for two more as he gouged Pearl’s defensive front with his legs and diced up the secondary with his laser-sharp arm.

“I felt compelled leading my team along with some of the rest of the seniors,” Akers said. “To finally be able to (live up to the expectations) and do what we’ve wanted to do, it means a lot.”

It was a performance that had to be seen to be believed. Akers dazzled fans in attendance with is 217 yards of rushing on 30 carries and showed off his arm for 228 yards through the air. The senior threw for 20 more yards than Clinton’s season average.

The highlight of the night was without question the final play of the first half. With the clocking rolling towards zero and everyone on the field preparing to make their way to the locker rooms, Akers and the Clinton offense ran up to the line, snapping the ball and beating the clock only for Akers to throw a 46-yard touchdown pass through a whole only his teammate Jordan Patton could catch it as time expired. It gave the Arrows a 28-14 lead at the break.

“Perfect,” Akers said of thee ending to his high school career. “Now I just have to figure out where I’m going.”

Akers even made plays on defense, recording three tackles and one pass breakup.

With his high school playing days over, minus a couple all-star games in his future, Akers must now turn his attention to where he wants to play football on Saturdays. Ole Miss is in the mix, but so are a few other nationally notable programs. LSU, Florida State, Georgia are others who are vying for Akers’ services. The Seminoles and Bulldogs had representatives present to watching Akers’ masterful performance.

All eyes are on Akers and the ones who saw what he did Friday night, are anxious for what’s next.