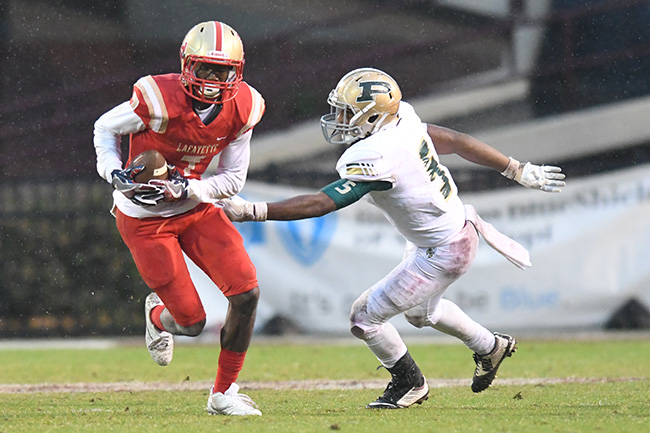 Lafayette High's Brandon Turnage (7) catches a lateral to Poplarville's Austin Bolton (5) on a flea flicker and runs it back for a touchdown in the MHSAA Class 4A state championship game, at Davis-Wade Stadium in Starkville, Miss. on Saturday, December 3, 2016.

STARKVILLE — Lafayette’s defense knew exactly what they needed to do in order to secure the golden football trophy and bring it back to Oxford. They had to shut down the potent wing-T offense of Poplarville. They succeeded plus some.

The Commodores forced four turnovers, scoring 20 of their 27 points off of them, and kept the Poplarville run game in check for most of the game. The tone was set early as they forced the Hornets to punt on their first two drives of the game. The rest of the first half was no picnic either for Poplarville as the other five possessions resulted in an interception, a turnover on downs,  a punt, a fumble and the end of the half.

“(Poplarville) score really quick and early in games because their speed is just really, really quick,” Lafayette head coach Michael Fair said. “That was our concern. But I’ll tell you what, our scout team that ran against these guys all week did a tremendous job of getting them in the right spot. I thought that was huge for us.”

Poplarville averages 446 yards a game but was held to just 110 yards in the first half and only 89 yards on the ground. The air attack from the Hornets was never a legitimate threat as quarterback Antonio Barnes attempted only five passes, completing two of them for 21 yards. The Lafayette defense got to Barnes, sacking him two times. Barnes also threw two interceptions, being picked off by Tay Tay Owens and Xavier Martin.

Lafayette’s Martin and Brandon Curry tied for a game-high 12 tackles.

A key moment in the game was late in the first half when Poplarville recovered a Lafayette fumble by quarterback Will Ard. The very next play was a hook and ladder lateral that went wrong for the Hornets but right for the Commodores as Brandon Turnage was right there waiting and took it 65 yards for the touchdown, keeping momentum in Lafayette’s locker room.

“I think we actually could have performed a little better,” Lafayette’s Tyler Carmichael-Williams said. “We always want to hang a zero. That’s our goal every game for our defense. … We game planned all week (for the wing-T) and went over in practice all week. We held on and we got it done.”

The ground game got going for Poplarville in the second half, but much after the game was well in hand for Lafayette. The Hornets rushed for 233 yards the final two quarters and scored both of their touchdowns on the ground.