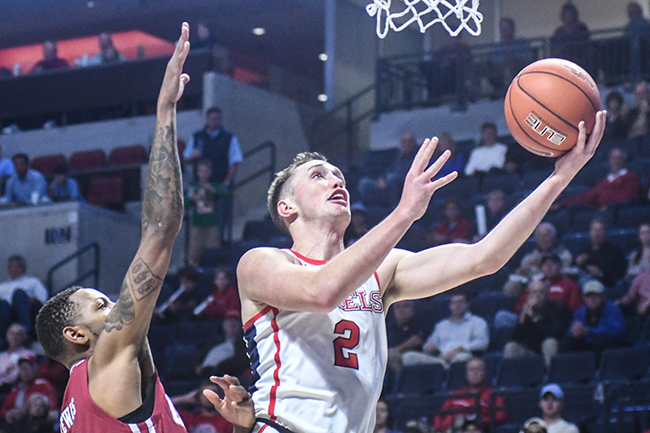 Ole Miss is in the midst of an eight-day layoff, and head coach Andy Kennedy feels like his team has made improvements in its problem areas with the extra practice time.

Kennedy will find out for sure this weekend.

Ole Miss bounced back from its ugly loss to Middle Tennessee State last week with a win over Memphis on Saturday. Next up for the Rebels is their first true road game at Virginia Tech on Sunday (11 a.m., ESPNU).

The Rebels (6-2) haven’t played this week because of finals, a taxing time mentally for players. But Kennedy said he’s worked around the players’ academic schedules “to be as productive as possible” in preparing for the next game in what may be Ole Miss’ toughest stretch of the non-conference schedule.

“What I’m hoping to see is just our team make improvements,” Kennedy said.

Virginia Tech, the first Power-Five opponent the Rebels will face this season, is undergoing a resurgence under third-year coach Buzz Williams. Ranked 35th in the latest KenPom ratings, the Hokies (7-1) already have wins over New Mexico, Nebraska and Michigan this season with their only loss coming in a one-possession game against Texas A&M.

Senior forward Zach LeDay (17.4 points per game) and sophomore guard Ahmed Hill (12.4) lead four Hokies averaging double figures, a balanced scoring attack that will be yet another challenge for an Ole Miss team that’s struggled to communicate defensively with different lineups on the floor. The Rebels have given up the most points in the SEC and are next to last in field-goal percentage defense (43.7 percent).

Kennedy said he’s sensed eight games and additional practices have helped the dialogue on that end of the floor. The next step is to carry that into another team’s building where the surroundings aren’t as comfortable.

“It’s our first true road game in an ACC environment that I’m sure will be full of energy,” said Kennedy, whose team played three neutral-site games in the Paradise Jam last month. “I’m anxious to see how our guys respond. I’ve been very transparent early in the year about my frustration with this group with their ability to communicate with one another on the court, so this is going to be the ultimate test of that.”

Kennedy is still tinkering with his starting five as he continues to search for the right combinations. Freshman Breein Tyree and sophomore Terence Davis got their first collegiate starts against Memphis, combining for 15 points on 3 of 8 shooting.

Cullen Neal and Rasheed Brooks came off the bench to score 12 and eight points, respectively, but Tyree and Davis give the Rebels a different level of athleticism in the backcourt. Tyree has played 16 minutes in each of the last two games for his most extensive playing time of the season, a sign he’s getting closer to full speed after having ACL surgery in the spring.

“As he continues to get stronger, his role will continue to expand, and I think that allows us some more versatility, especially in our backcourt,” Kennedy said.

Kennedy will have a better idea of exactly where his team’s cohesion stands after Sunday.

“It’s going to be a big test for us, but it’s one in which it’ll give us an opportunity to learn more about ourselves,” Kennedy said. “Now that we’ve got eight games under our belt, it’s time for a lot of our guys to take the next step in consistency and take that next step in really forming a brotherhood on the court and being an ultimate team. We’ve shown that in spurts. It’s time for us to be more consistent in that matter.”