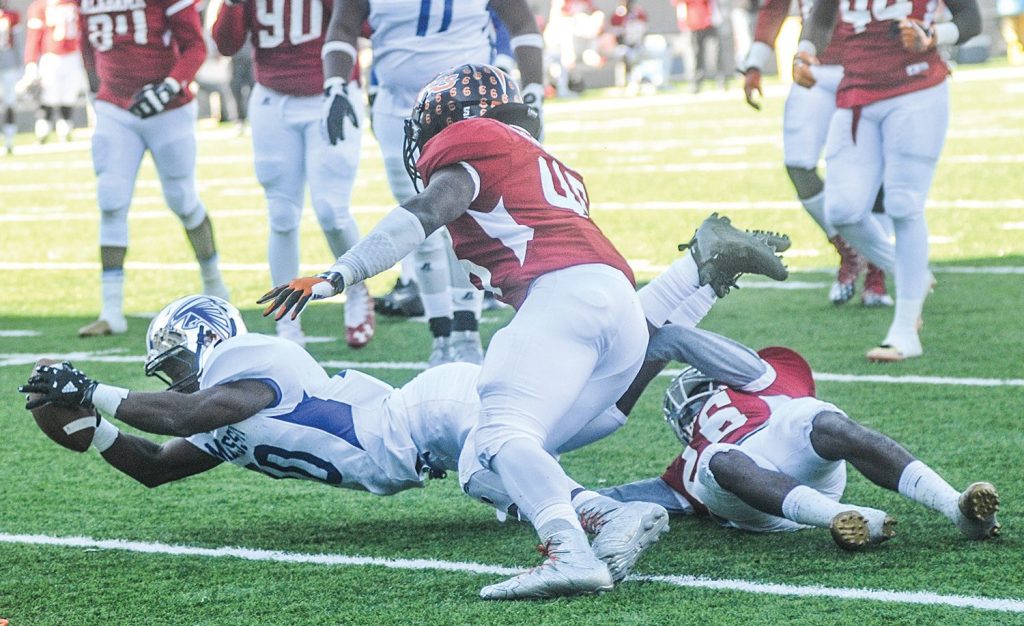 Mississippi’s Kylin Hill scores in the second quarter as he dives into the end zone past Alabama’s Kholbe Coleman (45) and Marcus Jones (26) in the Mississippi-Alabama All-Star game Saturday at the Cramton Bowl in Montgomery, Ala. The Alabama All-Stars won 25-14. (Jake Thompson)

MONTGOMERY, Ala. — All eyes were on the offense of Mississippi heading into Saturday’s Mississippi-Alabama All-Star game, but the focus should have been on the defensive front of Alabama instead. The host state’s team dominated up front, leading the way for a 25-14 Alabama victory at the Cramton Bowl. It was the eighth win in the past nine games for Alabama, which now holds a 22-8 lead in the series dating back to 1988.

Alabama’s defense got to Mississippi quarterbacks Myles Brennan of St. Stanislaus and Northwest Rankin’s Braden Smith for a total of 4.5 sacks. Brennan was sacked once while Smith was hit for a total of three.

“Any time you play in an all-star game, you’re going to get the best that they’ve got,” Mississippi and Oxford center Colton Skidmore said. “Coming out here against some d-linemen, it was good competiton.”

The potential for the scoreboard to be lit up often was proven right on the very first play. Alabama’s Henry Ruggs III of Robert E. Lee High School in Montgomery took the opening kickoff 90 yards for the touchdown and a 7-0 Alabama lead just 15 seconds into the game.

The scoring was held in check the rest of the opening quarter, but Alabama kicker Jake Lane of Park Crossing High School, also in Montgomery, converted a 38-yard field goal for the 10-0 lead midway through the second quarter.

Mississippi finally knocked the zero off the scoreboard late in the first half when Columbus running back Kylin Hill capped a 12-play, 70-yard drive with a 9-yard run to cut Alabama’s lead to 10-7 with a little under 3 minutes left in the second quarter.

Alabama worked their two-minute offense down to the Mississippi 22-yard line, and Lane knocked his second field goal in of the game, this one from 32 yards  out to give Alabama the 13-7 lead at halftime.

Mississippi earned their first and only lead of the game when defensive back Kam White of Clinton picked off an errant pass from Alabama’s Leslie Thompson for a 49-yard pick-six and a 14-13 Mississippi lead 3 minutes into the second half.

“The quarterback rolled out and I saw he didn’t have many options,” White said of the throw. “He just threw it up and I saw it and just had to go get it. … I told Myles I was going to get one before the week gets out, but I didn’t get to get him. This pick was much sweeter.”

The final 12 minutes of the game were forgettable for Mississippi starting with a 38-yard field goal by Lane 54 seconds into it for a 16-14 Alabama lead. The following Mississippi possession compounded things as the snap to punter Thomas Stevens of New Hope sailed through his hands and out of the back of the end zone for an Alabama safety and expanded their lead to four points with 9:33 remaining. Alabama would later ice the game off a 13-yard run by running back Brian Robinson of Hillcrest High School out of Tuscaloosa with 3:07 left in the game for the winning margin.

“That’s one thing Alabama always has is big, physical guys up front,” Mississippi and Wayne County head coach Todd Mangum said. “They always do a good job of rushing the passer, and they play hard up front. It didn’t catch us by surprise. … It’s an all-star game and you’re limited on both sides of the ball with what you can do. It comes down to execution.”

It was not banner performances for top Mississippi recruits in Brennan and Clinton running back Cam Akers. Brennan threw for 59 yards on 11 of 15 passing and was responsible for the only fumble of the game. Akers, one of the top players in Mississippi  and the country, was held to less than 100 yards as he piled up 65 on 19 carries. He completed 2 of 3 passes for 45 yards but threw one interception.