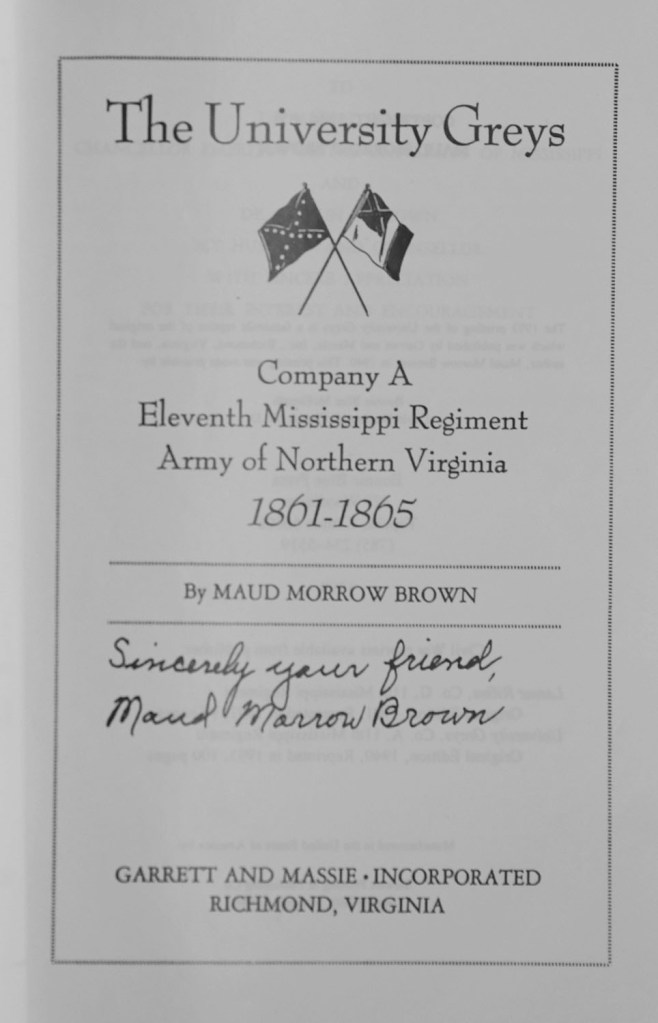 During the time I was writing about the saga of the University Greys, I came across an event at the University of Mississippi that shed light on the service of university students in the Civil War. It was an opera written by local historian Maud Morrow Brown.

In 1940, Mrs. Brown published a short but authoritative book on the University of Mississippi students who fought gallantly for the “Southern Cause.” Company A of the 11th Mississippi Regiment of the Army of Northern Virginia was comprised of 136 men mainly from the students then attending the university. Three of the men were from foreign countries and the other 133 were from 12 southern states.

If you have ever seen the movie “Gone With the Wind,” you will remember the scene at the beginning of the movie at Twelve Oaks. When the young men learned the news of Fort Sumter that the war had begun, they rushed off to join the Confederacy. This is similar to what happened with the students at the university. Since this unit was comprised of men from all over the state, Lafayette County was allowed to contribute another company to the regiment.

This other company was the Lamar Rifles. J.C. Rietti in his book “Military Annals of Mississippi,” states, “This regiment, one the oldest in the service, was noted for the character and ability of its officers and the high order of material which composed its rank and file. Perhaps no regiment entered the service with a larger number of professional men in the ranks.”

An Ole Miss professor’s wife first conceived an opera, based on Brown’s book. Zoe Lund Schiller Kreutz, a novelist and playwright and the wife of Professor Arthur Kreutz of the Department of Music, was walking through the Grove when she heard a military band playing in the distance. She thought of how the students who comprised the University Greys must have marched under the same trees to a military band.

She had also read Brown’s book and she thought the book would be an excellent basis for an opera in the modern style. She related the incident to her husband and he also felt it would make a good basis for an opera. They took their idea to some faculty members and Chancellor J.D. Williams commissioned them to write and stage the opera. This was in the spring of 1953 and by March 1954 the opera was ready for a performance at Fulton Chapel.

Brown worked with the Kreutzes on the production of the “University Greys.” She gave them advice and assistance on the background of the student military company. “When I first met Maud Morrow Brown,” Mrs. Kreutz said, “I was impressed with her tremendous interest in, and knowledge of, the historical background of the University and Lafayette County. We have depended on her to a great extent as the writing of the plot progressed, and have found her assistance almost indispensable.”

The opera was performed on March 15-16, 1954, in two acts with nine scenes and done in the modern opera style. It was a style that was being used on many college campuses at the time. The style emphasized the dramatic and libretto assumed a more important role. The staged scenes changed little during the production but local citizens of Oxford did provide the props that were used. The Mary Buie Museum provided a Confederate uniform, saber, and sash. Dr. E.B. Bramlett loaned a saber and others provided furniture and clothing.

John Allred of Collins played the main character, Boone McCrea. His sweetheart and widow, Laura Meadows, was played by Dolores Parker of Keiser, Arkansas. Among the other members of the cast were Oxford residents Tommie Cofield, Virginia Baker and Johnny Sharpe. Tina Gates of Oxford played a small child.

Dr. Mark Hoffman, chairman of the University Department of Music, described the opera as “the most ambitious undertaking in the field of culture attempted at Ole Miss.” “The characters are fictional,” Kreutz said, “but we consider the production historically accurate in its reflections of the attitudes and feelings of the people involved. It’s not a story of the Southern planter aristocracy, but a love story of middle-class Southern small-towners, part of the best traditions of the South, but often overlooked.”

The Commercial Appeal reported, “The Music Department of the University of Mississippi stepped out into the big leagues this week with the world-premiere production of a new opera. The staging, by Mrs. Kreutz, is starkly simple, with two platforms and a few tables and chairs inviting the audience to fill in its own settings. Through artful use of lights, the five scenes of the first act and the four of the second flowed without interruption of drawing a curtain.”