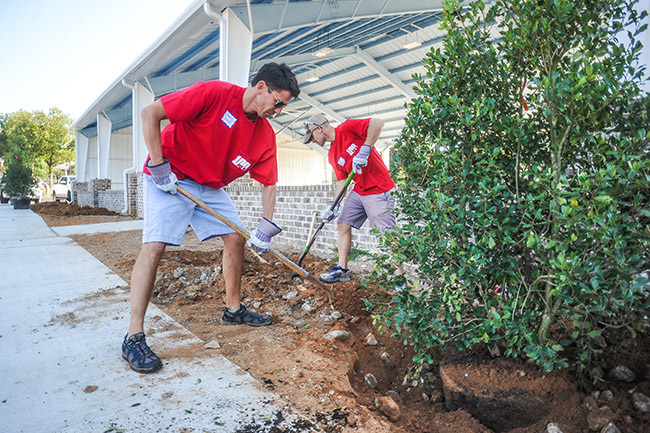 Oxford’s leadership was awarded recently for their hard work and dedication in providing more community green spaces for its citizens.

On Tuesday, Cowan Hunter, co-chair of the Oxford Tree Board, presented the award to the Oxford Board of Aldermen from the Mississippi Urban Forest Council and read an award letter from Executive Director Donna Yowell.

Prior to the organization’s annual conference this summer a call went out for nominations for the various awards to be announced at the conference. The Tree Board submitted two nominations that resulted in awards.

Oxford was named City Government of the Year for 2016 and a volunteer group — 100 Men — received the Local Reforestation Award for 2016.

Both awards seem to focus on the restoration of the former National Guard Armory into a community pavilion and the collaborative effort it took to make that happen, Hunter said.

“We are honored to present the city of Oxford with the state Local Government award for outstanding work in developing sound urban forests and managing trees in a way to enhance Oxford and it’s quality of life,” Yowell said in the award letter. “Oxford has done an outstanding job of ensuring that the city continues to be a model of green infrastructure practices for our state.

“We also would like to recognize (Oxford Buildings and Grounds superintendent) Billy Lamb’s work as well as the Oxford Tree Board.

“Working together, the city has created a wonderful play to live, work and play.”

The Mississippi Urban Forest Council is the statewide urban and community forestry organization that has worked with Oxford for over 25 years. It provides education and resources to assist Mississippi communities advance their local programs.

The 100 Men community service group was awarded for their assistance with the tree planting on old armory site.

“This group is organized on the basis of friendship and has as a mission giving back to the community that has helped members achieve success,” the award letter states. “It include developers, contractors, engineers and others who donated there time, talent and tools to complete the initial phase of tree planting at Oxford’s old armory site. In doing so they aided in the ongoing transformation of the site into an important green space for the city and contributed to the conservation of Oxford’s urban forest.”

Hunter said Oxford’s trees are an important resource for the community and that efforts to improve their conservation are ongoing.

“The revisions to the landscape ordinance represents part of that effort as do tree planting projects such as one recently completed in Lamar Park and another soon to begin on Old Taylor Road,” he told the EAGLE. “In 2017, we also plan to undertake a tree inventory funded through an Urban Forest Challenge Grant from USDA.

Mayor Pat Patterson also thanked former city clerk Lisa Carwyle and Public Works Director Bart Robinson for coming up with the idea to turn the old armory into the open-air pavilion, which is now managed by the Yoknapatawpha Arts Council.

MDOT looking out for motorists during Holidays