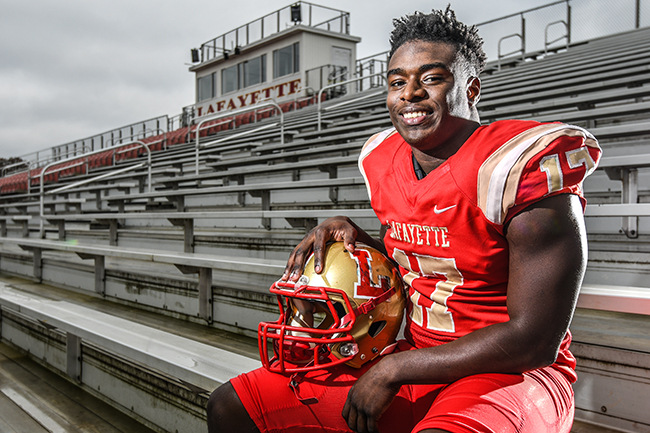 Replacing Tyrell Price and what he did during his final two seasons at Lafayette is a tough ask of anyone, but someone had to try. That someone was running back Jamarcus Quarles, and he passed the test with flying colors.

After getting his feet wet in eight games during his sophomore campaign last season where Quarles finished with more than 300 yards and Lafayette’s second-best rusher behind Price, it was time for him to take the next step in 2016. 316 carries and 2,140 yards later, Quarles carried the Commodores to their first state championship in five years and himself to the 2016 EAGLE Player of the Year.

“Last year, I didn’t really get many carries because I was a backup, but for me, starting is a big thing because I’m finally getting my shot,” Quarles said. “I can show other people what I’m capable of in the game of football. So it’s a pretty big deal.”

During his first two seasons at the varsity level, Quarles has had that many head coaches. Eric Robertson left Lafayette after the 2015 season to head south to Madison Central, opening the door to Michael Fair to take over after two years at Senatobia. Fair saw a little bit of Quarles last season from an opposing coach’s perspective when the Commodores faced Senatobia for the region championship. Quarles only had one carry for no gain, but what Fair did see out of him made him excited to have him on his side when Fair arrived in the spring.

“Watching (Quarles) on film and preparing for him, we knew Tyrell Price was a good player, but No. 17 caught our eye as a backup,” Fair said. “When he came in, it was no dropoff. He was a good player as a sophomore, and when got here, I knew we had talent at tailback. I knew we had guys that could do it, but the best fit was for Jamarcus to just take that spot.”

In Lafayette’s first two games of the season — also their only losses — against Horn Lake and Grenada, Quarles rushed for 304 yards but was shut out of the end zone. The final 13 games of the season, he averaged 141 yards per game and scored all 19 of his touchdowns. Like much of the Commodores’ success, Quarles also attributed the second half of the Grenada game to where he put everything together for his career year. He also credited the realignment of the offensive line by Fair after the Grenada game and before the annual Crosstown Classic showdown with Oxford.

“It was a big problem filling (Price’s) shoes because I didn’t think I’d run for this many yards,” Quarles said. “Really, to be honest, I didn’t think I’d be capable of running for that many yards, but with the line that I had, I’m pretty confident in what I can do. I saw more holes, more productiveness on the line. More drive, more talking to them one-on-one like, ‘Hey man, block this hole. I got you. Give me a hole and I got you.’”

Heading into his senior season next August, Quarles is now playing the role of Price and helping out the younger running backs in rising junior Jamie Shaw and rising sophomore Randy Anderson. Anderson became a key player late in Lafayette’s championship run with 13 carries for 328 yards and two touchdowns. Quarles sees a lot of himself in Anderson if not even more potential than he had.

“I see, actually better than me (in Anderson),” Quarles said. “Like power-wise, he goes in and he gets the extra yards we need. … It’s like we act off each other. One person scores, then I score, then Randy scores.”

This season is still fresh in his mind, but Quarles is focused on 2017. While he does not have any offers yet, that will soon change come summer and if he continues his production on the field next fall.

Lafayette
It was not just Quarles that guided the Commodores to the state championship as he is joined by nine other teammates on the 2016 EAGLE All-Area Team.

Ard saved his best season for his last as the senior threw for nearly 2,000 yards (1,915) and 19 touchdowns to his four interceptions in 15 games. Ard, who transferred west on Highway 6 from Pontotoc over to Lafayette his sophomore season, guided the offense just enough to allow Quarles to lead the attack. Ard’s 104 yards and one touchdown against Poplarville earned him the Most Valuable Player honor in the Class 4A state championship game earlier this month.

While he did not attend, Williams’ year earned him a spot on Team Mississippi’s roster for the 30th annual Mississippi-Alabama All-Star game this season. Williams was a force on both sides of the ball, racking up a team-high 795 receiving yards and nine touchdowns while also recording 43 tackles in the Commodores’ secondary. Turnage joined Williams on both sides as the sophomore finished behind him with 381 yards and three touchdowns and had six interceptions.

Curry had a team-high 158 tackles followed by Woods with 130. The kicking game was key for Lafayette as Dabney averaged 40.6 yards per punt while Langley scored 81 points on six field goals and 63 point-after attempts.

Wadlington led the Oxford rushing attack with 1,250 yards and 12 touchdowns on 238 carries while Flowers was quarterback John Reece McClure’s top target with 655 yards and five touchdowns on 36 receptions.

Skidmore, a four-year starter at center, had a banner senior season as he joined Lafayette’s Williams on the Mississippi roster and attended the all-star game in Montgomery, Alabama earlier this month. Wilfawn proved to be the lynchpin of the Oxford defense as he recorded a team-high 171 tackles while Thomas was the only other player in triple digits with 115 tackles. Wilfawn also recorded 2.5 sacks.

Terrell had 43 tackles and four interceptions, one shy of Thomas’ team-high five picks. Each combined for five fumble recoveries while Thomas caused three fumbles and blocked a field goal.

Water Valley
It was a down year for the Blue Devils as a whole, but there were some individual performances that helped earn four players on the team this year. Taghee James, Martavius Rockette, Payden Surrette and Quaterrious Tolbert represent Water Valley this season.

James rushed for 544 yards, nearly half of the Blue Devils’ season total of 1,226 yards, and six touchdowns on 128 carries. He finished with two 100-plus yard games. Rockette’s freshman season ended with him being the top wideout for Water Valley with 361 yards and one touchdown on 29 receptions.

Defensively, Surrette led the Blue Devils with three sacks to go with his 40 tackles. Tolbert tied Rockette with a team-best two interceptions.