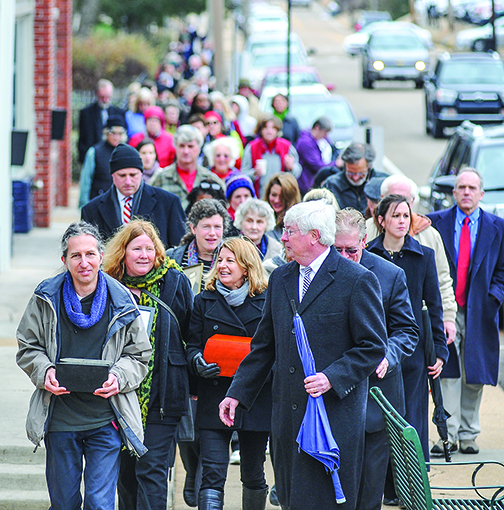 About 125 people walked from Oxford-University United Methodist Church to Oxford Memorial Cemetery in memory of Al and Becky Moreton in Oxford, Miss. on Monday, January 25, 2016. The couple, who were known throughout Oxford in part because of their walks around town, died in a car wreck last week.

The first four months of the year got off to an unsteady, and in some cases, tragic start.

On January 18, longtime Oxonians Al and Becky Moreton died in a car accident when their vehicle crossed over the median on U.S. Highway 49 and was struck by another car. Al Moreton, 82, earned his law degree from Ole Miss in 1961 and went on to work at the U.S. Attorney’s Office of the Northern District in Oxford. Al later worked in Washington during the civil rights era, helping to author new rights with the Department of Justice.

Becky, 78, served on the Oxford School Board and perhaps most notably the Oxford Pathways Commission where she was a vocal advocate to keep the city’s streets safe for pedestrians. The Moretons were known for their daily walks through Oxford and during their funeral service, the family asked service attendees to join them on a final walk from Oxford-University United Methodist Church to Oxford Memorial Cemetery while they carried the couples’ ashes.

Earlier in January, 18-year-old Hunter Escue was shot by his first cousin Austin McLarty, 20, when the two were handling firearms. Upon further investigation, the shooting was ruled accidental by authorities at the time, but a grand jury later indicted McLarty on negligent homicide charges. Court records show a new hearing for him on Jan. 7, 2017.

Also at the beginning of this year, The Pavilion at Ole Miss opened its doors after a year and a half construction period. The $96.5 million dollar, 225,000-plus square foot facility was designed for Ole Miss sporting events and other live events as well.

February brought the passing of The EAGLE’s longtime former publisher Jesse Pittman Phillips who died at 84. During his career, Phillips owned and published the paper for 53 years and also worked for the Mississippi Press Association. Phillips is also remembered for helping in integrating Oxford schools and for his love of the town on the whole.

In March, a plaque was added to a Confederate monument on the Ole Miss campus to provide “historical context.” The plaque talks about how the monument was first dedicated in 1906 and stands as the location where a local minister, “implored (a) mob to disperse and allow James Meredith to exercise his rights as an American citizen.”

A house fire in mid-March resulted in the death of Ole Miss professor and associate dean for research and graduate programs James P. Chambers. A graduate of Georgia Tech and Hertz Foundation fellow, Chambers was alone in the house at the time of the fire.

Derrick Boone, one of three people charged with the shooting death of UM grad student Zacharias McClendon, pled guilty during his April trial. Boone received a life sentence without the possibility of parole.

April 20 marked the final edition of the EAGLE to be printed at its old Jackson Avenue location in the Square. The next day, the company began the move to its new location at 4 County Road 2050. During the two-week move, 50,000 pounds of printing press machinery had to be relocated.

At the end of April, Caterpillar, Inc. announced the closing of five plants, including its Oxford location over the course of the next 18 months. An estimated 240 people will lose their jobs, among them many Oxford and Lafayette county residents. Caterpillar opened in the county in 1997 and will cease operations in 2017.