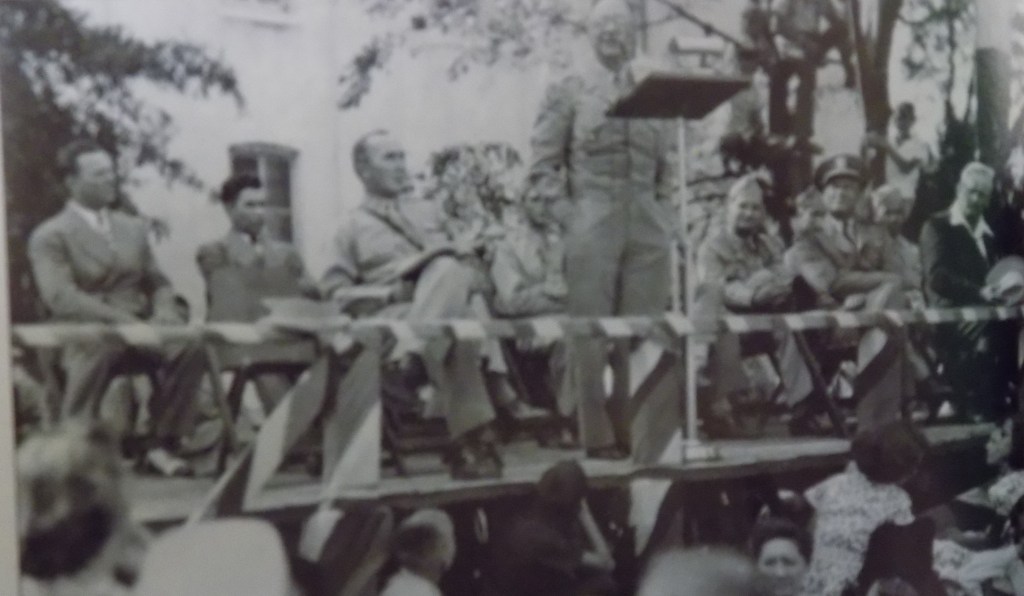 Some time ago, local historian and businessman Will Lewis gave me a call and passed on a story that he had found interesting and he thought my readers would also find interesting about a local boy who made good during World War II.

This Oxford boy had attended West Point and later became Deputy Commander in Chief of the China-Burma- India Theater of Operations.

This former Oxonian’s name was Daniel Isom Sultan. He was born and raised on North Lamar in a home known a Fiddler’s Folly. This is now Nan and Tom Davis’ home, which is the one currently, being renovated. His father came to Oxford in the later 1870s from South Carolina. He met and married one of the five daughters of Hermann “Ole Bully” Wohlleben.

If you will recall, “Ole Bully” was the Civil War wagonmaster and blacksmith for General Van Dorn. When Van Dorn made his raid on Holly Springs, Wohlleben made off with the Union payroll. He would later become a very wealthy property owner and bank in Oxford.

Daniel Isom Sultan, the son of Daniel and Emma Sultan, was born in 1885. He would enter West Point in 1903 and graduate in the class of 1907. In an obituary after “DI,” as he was called, died from heart disease at Walter Reed Hospital in Washington in 1947 at the age 61, I found an interesting story about “DI” and his grandfather, “Ole Bully.”

The first few paragraphs of an official obituary in a U.S. Army publication, Assembly, had this to say about the life of Lieutenant General Daniel I. Sultan:

“Daniel Isom Sultan, Class of 1907, U.S.M.A., was a descendant of those gallant and obstinate Cavaliers of the Old South who fought for State’s Rights for four long years of the devastating Civil War. Time and events had begun to heal the wounds of the conflict of brothers as he grew to youth and envisioned a military career under the restored Union, but that there were unreconstructed Rebels in his family is evidenced by the refusal of his grandfather to receive him when he called in the uniform of a West Point Cadet.

“His father, more tolerant of national unity and aware of its development from participation of the South in the War with Spain and the Philippine Insurrection, and his mother, anxious that he should have the advantages of education which poverty of the South denied, fostered the ambition to enter the military service, and with their encouragement he obtained his appointment to the U.S. Military Academy.

“Prepared by such facilities as were available to him at his home in Oxford, Mississippi, where he was born on December 9, 1885, he succeeded in passing the entrance examination and became a member of the class which entered the Academy on June 15, 1903.

“His four years at the Point disclosed the talents which peculiarly fitted him for assignment to the Corp of Engineers he ranked ninth in the 1907 graduating class of 111 members — and for the discharge of the increasing responsible duties imposed upon him as his advancement in rank under the seniority system then in vogue, occurred.”

By the end of World War I, “DI” had obtained the rank of Lt. Colonel. He had been on the staff of Gen. Pershing and received the first of his Distinguished Service Medals. Before his service in France, he had been assigned to the Philippines. He was department engineer in charge of building fortifications on the islands. The manner in his these fortifications resisted for such a length of time the overwhelming Japanese attack in World War II, attested to the skill and most lone workmanship under his direction.

In 1939 “DI” was promoted to the rank of Brigadier General and sent to Hawaii as the commanding general at the Hawaiian Division located at Schofield Barracks. Seven months before the fateful Pearl Harbor attack, he returned to the mainland as commanding general of the 38th Division at Camp Shelby, Mississippi. When the Third Army maneuvers were preparing our troops for their great tasks overseas,

“DI” was given command of the VIII Corps, with headquarters at Camp Hood and Camp Bowie, Texas.

In January 1944, “DI” was named as Deputy Commander in Chief of the China-Burma-India Theater of Operations, and when that Theater was split he commanded the United States troops in the India-Burma Theater. This is when he worked closely with Lord Louis Mountbatten and General Joseph Stillwell. Under his command, the Chinese, American and British Forces in North Burma defeated the Japanese in that area and drove them south to Lashio. The Ledo Road into China was built, and convoys over it began to pass into China.

His task in Southeast Asia was a most complex one, for as he wrote to headquarters in Washington, “I find the job as intensely interesting one, but, my God, how many currents, counter-currents, and cross-currents. A man has to be a soldier and a statesman to handler, and perhaps, in the long run, a martyr. When you put American, British, Indians, and Chinese in the same sack and shake them up, problems are bound to arise. By the grace of God, we will solve them, however.”

Maybe “DI” learned to be a leader as he came of age in Oxford. Maybe his unreconstructed grandfather, “Ole Bully,” had a part in the formation of the boy who would become a leader of men.

JACK MAYFIELD is an Oxford resident and historian. Contact him at jlmayfield@dix-ie-net.com.