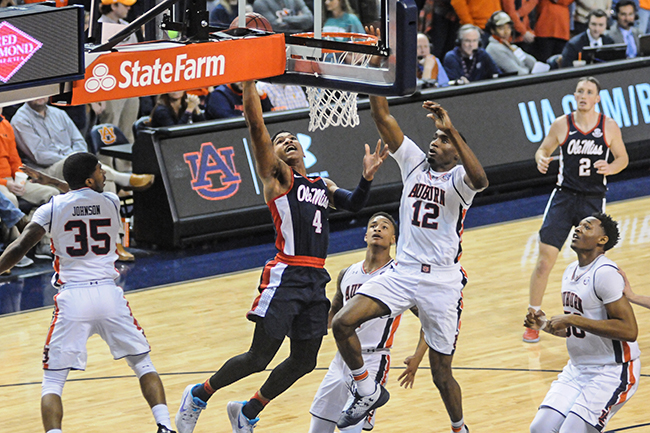 Ole Miss avoided an 0-3 start in Southeastern Conference play with an 88-85 win Saturday at Auburn that went down to the last possession. The Rebels coughed up a 72-60 lead late in the second half but made the plays down the stretch to get out of Auburn Arena with just its third top-100 RPI win of the season.

Here are three takeaways from the Rebels’ victory:

Veterans come up big when it matters

Ole Miss still makes some mistakes that are puzzling for a team with so much experience at this level, but the Rebels’ most seasoned players delivered with Auburn rallying and the Tigers’ home crowd buzzing late.

Senior Rasheed Brooks calmly knocked down a 3-pointer that put Ole Miss ahead for good with 39 seconds left, junior Deandre Burnett wasn’t all that efficient (3 of 10 from the field) but had eight assists and made four of his 10 free throws in the final 26 seconds to help keep the Rebels in the lead, and junior guard Cullen Neal, who’s played just 15 games at Ole Miss but played a lot of basketball for his dad at New Mexico the previous two seasons, had his best SEC game, more than tripling the point total he combined for in the first two league contests.

Ole Miss fell behind quickly against Kentucky and Florida and never really recovered, making Saturday’s game the first real dogfight the Rebels have been in since league play started. There were some shaky moments (more on 17 more turnovers in a bit), but Ole Miss showed the poise and composure head coach Andy Kennedy has been pleading for out of his group with the veterans leading the way.

Cullen Neal may finally be finding his niche

It’s been a rollercoaster start to Neal’s career at Ole Miss with the graduate transfer shuffling in and out of the starting lineup. Neal has been a point guard virtually his entire career but moved off the ball Saturday and became more of a scorer than a facilitator, particularly as a spot-up shooter when Burnett kicked the ball out on drives.

Neal finished with 13 points and an assist after combining for just four points against Florida and Kentucky with eight turnovers and just three assists. He was 4 of 7 from the floor and made all three of his 3-pointers in the second half as the Rebels quickly erased a 41-33 halftime deficit.

Neal said afterward he’s willing to do whatever he needs to do to help the Rebels win. He’s Ole Miss’ best 3-point shooter (41 percent), and Ole Miss may be better off letting Neal focus on that and having the more athletic Burnett and freshman Breein Tyree run the offense and break defenses down off the dribble.

You have to give Auburn — in particular freshman guard Jared Harper, who scored 18 of his 24 points in the second half — credit for knocking down some difficult shots down the stretch, but the Tigers had a bunch of extra possessions because of those 17 turnovers.

No SEC team has turned it over more this season than Ole Miss. Yeah, it’s still taking some time for some of the lineups to get used to playing with each other with four newcomers in the fold, but that’s not the only culprit. The Rebels try to make passes that aren’t there and rush things at times, particularly in transition, which lead to some careless giveaways. Ten second-half turnovers helped fuel the Tigers’ rally from that 12-point deficit before Ole Miss held on.

It nearly cost Ole Miss on Saturday, and it will against more talented, experienced teams the rest of the way if the Rebels don’t start cutting down on them.

Next up: Ole Miss will return home for the first time this month when the Rebels take on Georgia on Wednesday at 6 p.m.