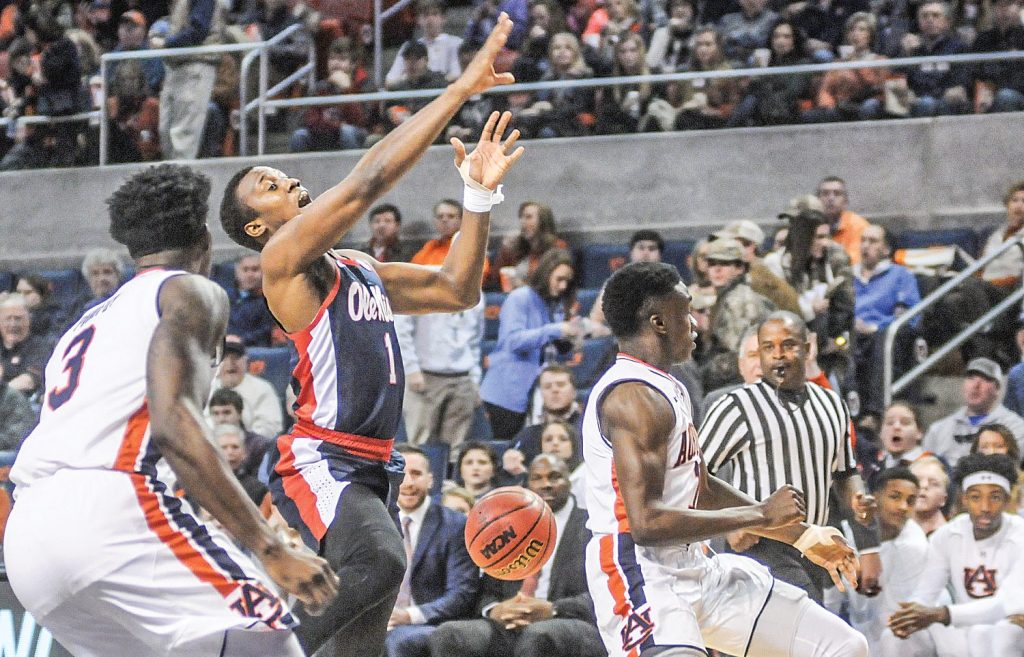 Ole Miss guard Deandre Burnett (1) loses the ball for a turnover against Auburn at Auburn Arena in Auburn, Ala. on Saturday, January 7, 2017. The Rebels are last in the SEC and 311th nationally in turnover margin. (Davis Potter)

Ole Miss has twice as many wins as losses against a schedule ranked by ESPN as the nation’s 15th-toughest to go along with a top-50 RPI.

The Rebels’ body of work through the first half of the season has produced some favorable numbers, but there’s one category that continues to plague Ole Miss two weeks into Southeastern Conference play: turnovers.

After 17 more giveaways that nearly cost the Rebels their first league win in a three-point victory at Auburn on Saturday, Ole Miss is tied for 311th nationally in turnover margin (minus-2.6). Ole Miss has committed 24 more turnovers than anybody in the SEC having played the same number of games as more than half the teams in the league with Georgia (10-5, 2-1 SEC) up next for the Rebels on Wednesday (6 p.m., ESPNU) at The Pavilion at Ole Miss.

Ole Miss coach Andy Kennedy said some of the turnovers could easily be avoided with better decision-making from a team that starts four upperclassmen. Other times, Kennedy can hardly believe what he’s seeing.

“I’ve seen almost everything in my time as a head coach in my 11th season, but I don’t know that I’ve seen a team that will literally just dribble the ball out of bounds,” Kennedy said. “We’ve got that mastered.”

Ole Miss (10-5, 1-2) hasn’t had fewer than 13 turnovers in any game this season and has turned it over more than 20 times twice, including 21 that thwarted any chance of the Rebels stealing a win at Florida last week. Ole Miss committed 10 of its turnovers against Auburn in the second half, which helped the Tigers erase Ole Miss’ 12-point lead in the final five minutes before the Rebels held on for their third top-100 RPI win.

It’s the Rebels’ primary ball handlers who are usually coughing it up. Junior guard Deandre Burnett has turned it over 23 more times than anybody else on the team while sophomore guard Terence Davis and senior forward Sebastian Saiz are next (31 apiece). Fellow guard Cullen Neal combined for eight turnovers in the losses to Florida and Kentucky but cut it down to two against Auburn.

Burnett and Neal are both playing their first season with the Rebels after transferring in from Miami and New Mexico, respectively, while Davis is getting the most extensive minutes of his career as part of a rotation that was pared down to seven against Auburn. Freshman guard Breein Tyree also got in the game but only played five minutes.

Those logging most of the minutes are counting on an increased comfort level among one another as the substitutions become less and less against league foes.

“We’re changing lineups up all the time,” Neal said. “I think once we get a grip on how it’s going to be, I think the turnovers will start decreasing.”

Ole Miss will need them to in order to keep the other numbers looking good on its postseason resume.

“We’ve just got to keep trying to work on fundamental basketball, and then we’ve got to make sure we’ve got the right guys in the right places,” Kennedy said.