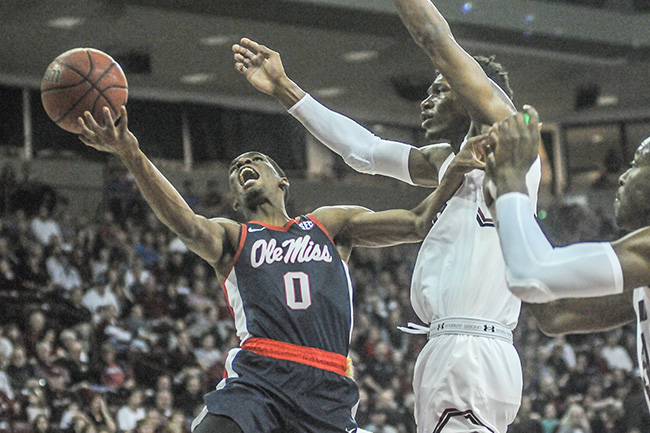 There’s no sugarcoating just how bad it’s been.

Ole Miss has just one win since the Southeastern Conference portion of its schedule started. A 1-4 start in the league — the first time the Rebels have gotten off to this bad of a start in the conference since 2011 — has an Ole Miss team that was thinking NCAA Tournament after a solid showing in the non-conference looking like a longshot for any kind of postseason.

The Rebels have 13 games left on their league slate to try to keep things from completely unraveling.

“I haven’t checked my phone, but I don’t think the commissioner is going to cancel the rest of our games,” Ole Miss coach Andy Kennedy said. “We’re going to try to get after it (at practice Sunday) and get ready for the next one. That’s life in the big leagues. That’s what they signed up for. That’s what I signed up for.”

It’s not so much the losing as much as how the Rebels are doing it.

Ole Miss has already played the top three teams in the SEC standings in No. 6 Kentucky, Florida and South Carolina. The Rebels’ lone league win came Jan. 7 at Auburn, which also has just one conference win so far, but their recurring issues didn’t give them much a chance against the better competition.

With little accuracy from its perimeter shooting and a turnover occurring nearly every other minute, Ole Miss’ league losses have come by an average of nearly 16 points. The Rebels were run out of the gym in their last two games against Georgia (69-47) and South Carolina (67-56), which led by as many as 25 in the second half before Ole Miss made some shots in garbage time.

“We definitely have to go to the drawing board and figure out what’s going on,” junior guard Cullen Neal said.

Sebastian Saiz (15.1 points, 11.7 rebounds) is doing his part, but the backcourt isn’t providing much help when the Rebels do hold on to the ball. Terence Davis is the only guard in the regular rotation shooting better than 41 percent from the floor for a team that’s next to last in the league in field-goal percentage.

The struggle has only gotten worse since leading scorer Deandre Burnett went out with a sprained ankle late in the first half against Georgia on Wednesday. Ole Miss has had its two worst shooting nights since, following a measly 27.5-percent showing from the floor against the Bulldogs with a 30.9-percent performance against South Carolina.

Kennedy said it’s affected other parts of the Rebels’ game, particularly rebounding, a normally strong area that’s been weak as of late. Ole Miss, which owns one of the league’s five best rebounding margins (plus-3.4), has finished minus-10 on the boards in three straight games.

“We’ve got to fight harder,” Kennedy said. “It’s unfortunate that it kind of goes the way of shot-making, and that’s just lack of discipline. That’s my fault. When you make shots, everybody plays a little bit harder. When you’ve been so impotent offensively as we have been the last two games, we’re not pursuing the ball. We’re not in the fight as much as we need to be in the fight.”

The games are going to keep coming whether the Rebels are ready or not starting Tuesday at home against Tennessee (8 p.m., SEC Network). Ole Miss’ only option, Neal said, is to keep fighting.

“We can’t let 1-4 define us,” Neal said. “We’ve got a home game coming up, so we just have to keep plugging one at a time and hopefully come out with some wins. … We have some older guys on the roster, so I definitely think we can turn this around.”

Burnett watched Saturday’s game at South Carolina from the bench with a walking boot on his left foot. Kennedy said Burnett is making progress but wasn’t ready to commit to the junior guard being able to suit up against the Volunteers (9-8, 2-3 SEC).

“It’s just kind of day to day,” Kennedy said. “Once the swelling gets out, we’ll make sure that he’s got his strength and his stability so we’re not risking further injury. Then it becomes a pain tolerance thing.”