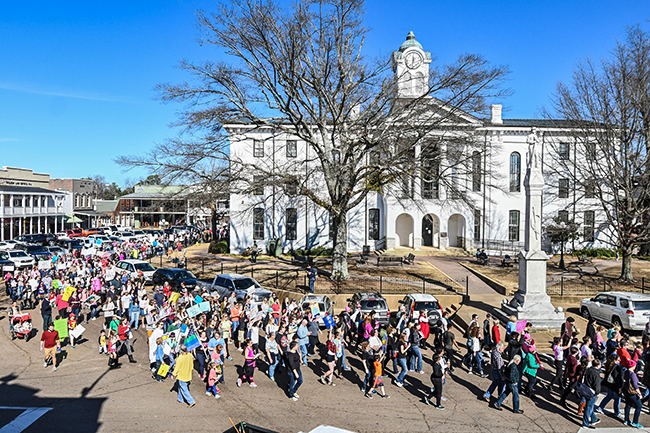 Bruce Newman Participants in the Oxford March for America walk around the Lafayette County Courthouse, on Saturday. It was one of several marches in cities across the United States.

Under sunny skies and in spring-like weather, hundreds of men, women and children gathered on the Square Saturday morning to take part in the Oxford March for America that focused on equal rights for all as a backdrop to the inauguration of President Donald Trump on Friday.

Many chanted, “Women’s Rights. Human Rights,” while some chanted “Love above all us,” and “We are the People.” There were American flags and rainbow flags. Many of the marchers carried signs. Some read “Love Trumps Hate,” and “I’m with Her.”

The east side of the Square was filled with people by 10:45 where a brief rally was held on the steps next to City Hall. The walk started at 11 a.m. to coincide with the Women’s March on Washington that started at 10 a.m. eastern time in Washington D.C.

The march organizer, retired teacher and Oxford resident Susan Fino, told the Daily Mississippian she expected about 150 for the march but triple that amount showed up. The crowd marched on the street around the Oxford Square.

According to the DM, “Whitman Smith, director of admissions at Ole Miss, wrote in marker on a plain white shirt: “Super bad, super rad, feminist dad.”

“I didn’t choose (the wording), my daughter did,’ Smith told the student newspaper at Ole Miss.

Smith said he marches for his daughter, who also marched.

“I march because I believe I believe everyone deserves equality, and we don’t have it,” Smith said.

Meanwhile, in a global exclamation of defiance and solidarity, more than 1 million people rallied at women’s marches in the nation’s capital and cities around the world Saturday to send President Donald Trump an emphatic message on his first full day in office that they won’t let his agenda go unchallenged.

Many of the women came wearing pink, pointy-eared “pussyhats” to mock the new president. Plenty of men joined in, too, contributing to surprising numbers everywhere from New York, Philadelphia, Chicago and Los Angeles to Mexico City, Paris, Berlin, London, Prague and Sydney.

The Washington rally alone attracted over 500,000 people by the unofficial estimate of city officials — apparently more than Trump’s inauguration drew on Friday.

The international outpouring served to underscore the degree to which Trump has unsettled people in both hemispheres.

“We march today for the moral core of this nation, against which our new president is waging a war,” actress America Ferrera told the Washington crowd. “Our dignity, our character, our rights have all been under attack, and a platform of hate and division assumed power yesterday. But the president is not America. … We are America, and we are here to stay.”

Turnout in the capital was so heavy that the designated march route alongside the National Mall was impassable. Protesters were told to make their way to the Ellipse near the White House by way of other streets, triggering a chaotic scene that snarled downtown Washington. Long after the program had ended, groups of demonstrators were still marching and chanting in different parts of the city.

White House press secretary Sean Spicer had no comment on the march except to note that there were no firm numbers for turnout because the National Park Service no longer provides crowd estimates.

Around the world, women brandished signs with slogans such as “Women won’t back down” and “Less fear more love.” They decried Trump’s stand on such issues as abortion, health care, diversity and climate change. And they branded him a sexist, a bully, a bigot and more.

“We want a leader, not a creepy tweeter,” some marchers chanted in Washington. Others: “Welcome to your first day, we will not go away!”

In Chicago, organizers canceled the march portion of their event for safety reasons after the overflow crowd reached an estimated 150,000. People made their way through the streets on their own anyway. In New York, well over 100,000 marched past Trump’s home at glittering Trump Tower on Fifth Avenue. More than 100,000 also gathered on Boston Common, and a similar number demonstrated in Los Angeles.

“I believe that strength is in the numbers, and that we should all come out and not make Trump the new normal,” she said.

All told, more than 600 “sister marches” were planned worldwide. Crowd estimates from police and organizers around the globe added up to more than a million.

“I feel very optimistic even though it’s a miserable moment,” said Madeline Schwartzman of New York City, who brought her twin 13-year-old daughters to the Washington rally. “I feel power.”

Retired teacher Linda Lastella, 69, who came to Washington from Metuchen, New Jersey, said she had never marched before but felt the need to speak out when “many nations are experiencing this same kind of pullback and hateful, hateful attitudes.”

“It just seemed like we needed to make a very firm stand of where we were,” she said.

As the demonstrators rallied alongside the National Mall, Trump opened his first full day as president by attending a prayer service at the Washington National Cathedral, a tradition for the day after inauguration, and later visited the CIA. As he traveled around town, his motorcade passed large groups of protesters that would have been hard to miss.

The Women’s March on Washington appeared to accomplish the historic feat of drawing more people to protest the inauguration than the ceremony itself attracted.

It far surpassed the 60,000 people who protested the Vietnam War at Richard Nixon’s inauguration in 1973. Before Saturday, that was thought to be the largest such demonstration in inaugural history.

The rallies were a peaceful counterpoint to the window-smashing unrest that unfolded on Friday when self-described anarchists tried to disrupt the inauguration. Police used pepper spray and stun grenades against the demonstrators. More than 200 people were arrested.

Marlita Gogan, who came to Washington from Houston for the inauguration, said police advised her family not to wear their “Make America Great Again Hats” as they walked through crowds of protesters while playing tourist on Saturday.

“I think it’s very oppressive,” she said of the march atmosphere. “They can have their day, but I don’t get it.”

Hillary Clinton, who lost to Trump, took to Twitter to thank the participants for “standing, speaking and marching for our values.”

The marches displayed a level of enthusiasm that Clinton herself was largely unable to generate during her campaign against Trump, when she won the popular vote but he outdistanced her in the electoral vote.

The hand-knit “pussyhats” worn by many women served as a message of female empowerment, inspired by Trump’s crude boast about grabbing women’s genitals.

The marches were a magnet for A-list celebrities, unlike Trump’s inauguration, which had a deficit of top performers.

Alicia Keys sang “Girl on Fire” for the Washington crowd. Madonna gave a fiery, profanity-laced address to the gathering. Cher, also in the nation’s capital, said Trump’s ascendance has people “more frightened maybe than they’re ever been.”

In Park City, Utah, it was Charlize Theron leading demonstrators in a chant of “Love, not hate, makes America great.” Actresses Helen Mirren and Cynthia Nixon and Whoopi Goldberg joined the crowd of protesters in New York.

Tens of thousands of protesters squeezed into London’s Trafalgar Square. In Paris, thousands rallied in the Eiffel Tower neighborhood in a joyful atmosphere, singing and carrying posters reading “We have our eyes on you Mr. Trump” and “With our sisters in Washington.” Hundreds gathered in Prague’s Wenceslas Square in freezing weather, mockingly waving portraits of Trump and Russia’s Vladimir Putin.

In Sydney, thousands of Australians gathered in solidarity in Hyde Park. One organizer said hatred, bigotry and racism are not only America’s problems.