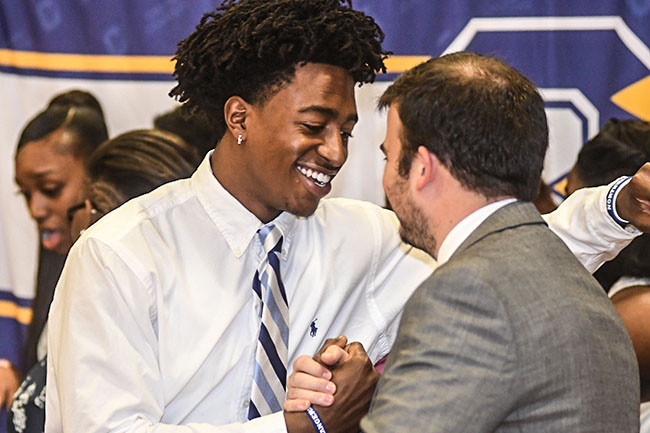 One of the more successful senior classes to come through Oxford’s football program in recent memory also had one of, if not the largest, groups to also put pen to paper and commit to play at the next level.

The Chargers had nine seniors choose between junior colleges and four-year universities during a National Signing Day event held inside the OHS gym Wednesday afternoon.

“I don’t ever remember having as many as nine (sign) before, so I think as a group, and even the guys that aren’t signing today, that group of seniors and what they accomplished says a lot,” Oxford head coach Chris Cutcliffe said. “I’m proud of what they stand for off the field, in the classroom.”

The 2017 senior class produced a 33-10 record, two Class 5A North Half Championships, two Region 1-5A Championships and seven playoff wins over four seasons.

Of the nine,  there are a pair of teammates as well as a group of three others who will continue to play with each other for at least the next two years at the junior college level. Former Oxford offensive lineman Colton Skidmore and Ashton Stewart signed with Northwest Mississippi Community College and will be rejoining former Chargers assistant coach Stan Hill in Senatobia next Fall.

Skidmore, who was a representative in the MS-AL All-Star Game last December, had options at the Division-1 level with offers from Delta State and others, but the familiarity of Hill and the chance to get two more years to audition for a four-year university appealed to him.

“Going JUCO just give you another opportunity to get re-recruited,” Skidmore said. “Coach Stan is up there at Northwest and we just have a great relationship. He was my offensive coordinator for three years and just to be able to go up there and play with him and still teammate (Stewart) is great.”

Two other Chargers will be taking the same trip south to Poplarville as Kent Hickinbottom, Jerry Quiller both  signed with Pearl River Community College. They will be joining former Oxford assistant coach and current PRCC offensive line coach Terrance Metcalf.

Nick Sisk signed with Holmes Community College while linebacker DT Thompson was the sixth Charger to ink with a JUCO school as he will join three Lafayette High players in Booneville to play at Northeast Mississippi Community College.

Millsaps added Kolbe Leary to their ranks as the senior signed with the Majors and will play in Jackson for the next four seasons. Leary was accepted into the Coast Guard Academy and also weighed going to Rhodes College in Memphis.

“I was looking for a strong school with a big academic background and that’s why I looked at some of the smaller schools with stronger academia,” Leary said. “I just liked Millsaps. Liked the coaches there. It’s a good business school and seems like it fit me.”

After having verbally committed to Ole Miss back in the Fall, then retracting that commitment, defensive back Devin Rockette finally settled on where he wanted to continue his career. the senior signed with South Alabama after the Jaguars made a late push in the recruiting process.

When Rockette decomitted from the Rebels, the news did not spread quickly as schools and other coaches who were interested were unaware of his new found availability.

“There wasn’t really anything that happened,” Rockette said of decommitting from Ole Miss. “It’s a good school, good football team. I just felt like that wasn’t the school for me. …(South Alabama) came in late and they said they thought I was still committed to Ole Miss but they wanted to offer me a scholarship.”

South Alabama tried to snag two Oxford players for their signing class as they also made a late push for linebacker DQ Thomas, but it was not to be as Thomas was firmly in the corner of Middle Tennessee State University and made it official on Wednesday.

Thomas’ trip to Murfreesboro on his official visit is what sealed his decision to go with the Blue Raiders.

“As soon as I got there it felt like a home,” Thomas said. “They’d been recruiting me for a long time, so I was familiar with them and some of the coaches. …That was the big decision. I looked at the depth chart and saw I had a chance. They were bringing in only one other linebacker so thought there must be spots to fill in.”