A family trip to Spain 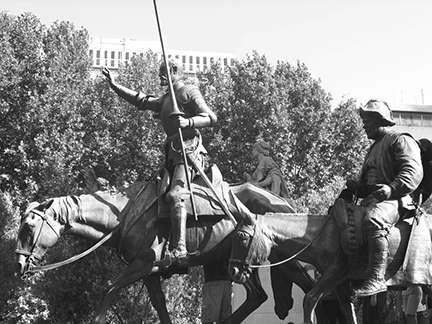 Located in Plaza de Espana in Madrid, the statue of the fictional characters Don Quixote and Sancho Panza welcome tourists to the capital city of Spain.

(This is the third in a series of three columns)

And now, as Paul Harvey said, “This is the rest of the story.”

Having enjoyed a couple of days in Pamplona, we bid our hotel hosts a “Thank You,” and left for Olite. Driving south on Christmas Day, we glanced through our right windows at snow-capped mountains, glistening in the sun. Recently, I read in my mountainous map of Navarre — Sierra del Perdon has an altitude of 6,056 feet. Sierra translates to mountain range. What a God given scene for Christmas! Later, we arrived at the Palace of Olite, our next stop.

This was built in the early 1400s, and includes gardens, a moat and several towers. The work was commissioned by Charles III, the Noble King of Navarre from the late 1300s to the early 1400s. Management had prepared a feast for our Christmas dinner — course after course, including appetizers, different breads, salads, vegetables, leg of lamb, a variety of seafood, including, squid, cod and baby octopus, a couple of desserts and finished off with a beautiful glass of champagne. The next morning, the grandsons learned about the “Watchtower.”

For many centuries, it was used to detect intruders from entering the Kingdom of Navarre. The very narrow, winding stairway had no handrails and led to an even smaller turret, sitting some 250 feet above the ground.

As we continued to Madrid, the landscape kept getting drier and drier and covered with more farmland.

It is said that Madrid has the highest elevation of any of the capitals in Europe. When Gary and David turned the rented vans in, the speedometers registered 500 miles. Our family owes them a huge “thank you” for a safe and enjoyable trip. Sarah and Katherine spent much time in the Prado Museum, enjoying the art. They say this collection is one of the best in the world. They saw works of great masters, such as Valazquez, El Greco, Murille and Goya.

Lois and I enjoyed a buffet breakfast with the family. As they left for sightseeing, we did see some people watching in the lobby. We moved outside when the temperature rose and found two empty chairs in view of the Plaza de Leo Cato. This Plaza was busy with pedestrians and vehicular traffic, each knowing when to go and when to stop. What caught my eye was its famous continuous circular fountain with probably a 50-foot diameter of water. Within the circle is the natural goddess in her lion-drawn chariot. At night, this display is lighted with white lights. The hotel desk clerk suggested that our family might enjoy a stage show of flamingo dancing. We purchased the tickets. The hardwood floor quivered with the staccato of pounding heels. A man stole the show with his footwork. Senoritas in flouncing skirts clatter their castanets. The man singer clapped his hands to the rhythms. We really enjoyed the show.

During our trip, especially in the Basque Country, we saw many small flocks of sheep. Not for just cheese and meat, but the satisfaction of tending to the flock. During our first breakfast in Bilbao, Katherine spied a small flock of sheep, grazing on a steep green mountainside. She snapped a picture. From her vantage point, she included the contrasting outside shine of the Guggenheim Fine Arts Museum. Katherine has herding sheep in her genes from her grandfather and her father. She even showed 4-H sheep in Batesville, when Lafayette County did not have a location to show 4-H stock. Samuel, Sarah’s youngest son, celebrated his 17th birthday at a Basque Cafe in Hondarribia, Spain.

The waitress brought him a cupcake with one lit candle. We sang, “Happy Birthday.”

Coming home, we passed through the Atlanta Airport’s Custom Security, where a large lady officer, with a gruff voice and accompanied by her sniffing spotted beagle, was working down the passenger line. Samuel was carrying a small carry-on suitcase.

As she approached Samuel, the beagle went wild at his bag. The officer asked Samuel, “What’s in your bag?” Samuel was embarrassed and kind of grinned. The lady officer asked him again.

Samuel replied, “It belongs to my grandmother.” The officer asked Lois, who replied, “Sheep Cheese.”

The officer told Samuel to move on. After a 10-hour flight, we arrived in Oxford with the images of the Basque Country still dancing in our heads.

Hope you also enjoyed our trip.

John Arrechea is an Oxford resident and can be reached at jonlo@ maxxsouth.net.