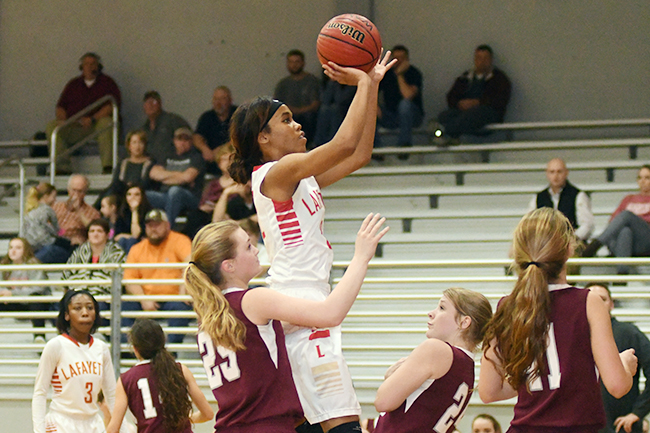 With one week left in the regular season of high school basketball Lafayette played, potentially, their final games of the season inside the Lafayette High gym on Tuesday night as the Commodores hosted Kossuth on Senior Night.

The seniors were sent home happy as both teams defeated the Aggies for the sweep to close out the home slate of their schedules. The night started with the girls’ team defeating Kossuth 62-20.

The score was not indicative of how the full four quarters went for Lafayette (22-3) as the start was a bit slow on both sides with the Commodores only scoring 10 points in the first eight minutes. The offense picked up slightly in the second quarter as Lafayette scored 18 points for a 28-11 lead heading into halftime.

“Senior Night is always a tough one because the realization that their high school careers are getting close to being over,” Lafayette girls coach Shayne Linzy said. “I think we were planning for some different defenses. Kossuth had some illnesses that they were dealing with and instead of playing man, they played zone. It wasn’t something we were expecting. It shouldn’t have affected us any, but I think we settled for some 3s early on that we probably shouldn’t have settled for.”

The Lafayette offense that has been able to put up large amounts of points all year finally showed up in the second half, outscoring Kossuth 34-9 in the final two quarters. Senior Shaniyah Buford led all scorers with a game-high 15 points while Xhirr Burgess added 12 points. Mariah Holland scored eight points while Azariah Buford chipped in seven.

Lafayette now prepares for the final regular-season game at Potts Camp on Friday before turning their attention to next week’s Region 2-4A tournament at Tunica-Rosa Fort. The Commodors claimed the No. 2 seed and get a first-round bye and will await the winner of Ripley-Rosa Fort, who they will play at 4 p.m. next Thursday.

For the first time in four years, the Lafayette boys’ basketball team has reached double figures in the win column for a season.

The Commodores defeated Kossuth 58-38 to notch their 10th win of the season. The last time Lafayette had more than nine wins in a year was the 2012-13 season when they finished with 13.

“Getting double-figure wins at this point in time is big for this program,” Lafayette head coach John Sherman said. “We had a five-game losing streak, and we wanted to stop the bleeding.”

It was a game that Lafayette (10-13) controlled the entire time, yet Kossuth managed to stick with them for nearly three quarters. Both offenses were able to find the basket in the first half, leaving Lafayette with a 29-24 lead at halftime.

“You can’t ever relax against a team like that,” Sherman said. “They can shoot it. They know how to play. If you relax, they’re going to lay it up. So we talked at halftime about guarding the cutters, being aware of the cutters. I think we did a better job of that.”

It was a much better second half for Lafayette, which outscored the Aggies 29-14 in the final two quarters to seal the victory. Stephon Isom led Lafayette with 14 points while Keilan Buford scored 13.

The Commodore defense held Kossuth to their second-lowest point total of the season with 38 on Tuesday. Their lowest was a 33-point outing in a loss to Ripley on Jan. 31.

After Friday’s game at Potts Camp, Lafayette, which is the No. 5 seed, will play in the first round of the 2-4A tournament against No. 4-seed Senatobia at 5:30 p.m. next Tuesday.