Ole Miss uses another second-half rally to down LSU 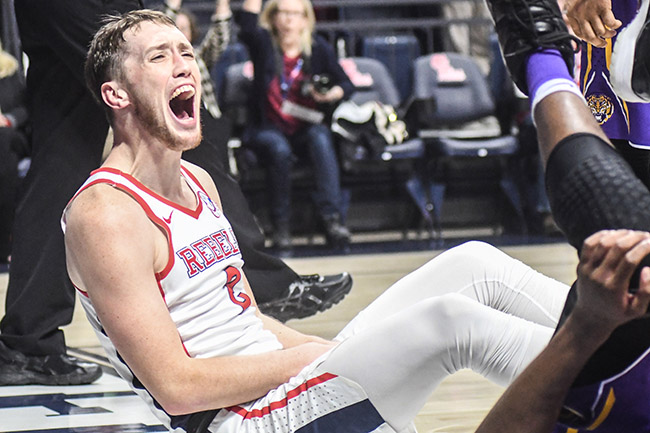 Ole Miss is getting used to this comeback thing.

Terence Davis set a new career-high with 33 points, Deandre Burnett and Sebastian Saiz each scored 15 points, and Ole Miss rallied from another double-digit deficit to avoid what would’ve been its worst loss of the season for a 96-76 win over LSU on Tuesday at The Pavilion.

“The grind is real, and it’s throughout college basketball,” Ole Miss coach Andy Kennedy said. “The teams that can continue to just stay the course and win games such as this, it’s so important. You have to protect your home floor.”

Three days after erasing a 23-point second-half deficit in a win over Auburn, Ole Miss trailed by as many as 11 against the Southeastern Conference’s last-place team and was down 10 after Brandon Sampson’s three-point play with 11:27 left, flirting with its first sub-100 RPI loss of the season as it tries to make a late run to get in the NCAA at-large conversation.

But the Rebels (16-10, 7-6 SEC) went on a 16-5 run to take the lead on Marcanvis Hymon’s layup. Davis, who scored 22 of his points in the second half after going for a then-career-high 26 against Auburn, followed with a 3 to break the final tie and knocked down a pair of free throws to give Ole Miss a two-possession lead.

Rasheed Brooks’ 3 gave Ole Miss its first double-digit advantage with 3:14 left as Ole Miss ended the game on a 24-4 run, getting above .500 in league play for the first time this season with its fourth win in its last five games. The Rebels began the night at No. 60 in the NCAA’s latest RPI rankings with a trip to Arkansas looming Saturday.

“We’re tied for sixth in the league,” Davis said. “There’s opportunities out there.”

Cullen Neal added 10 points and five assists for the Rebels, his second straight game in double figures. Antonio Blakeney led LSU (9-16, 1-12) with 29 points, but the Tigers’ leading scorer went without a basket in the last 12:46 against Ole Miss’ switching defenses.

“I thought in the second half when they adjusted their defense and got in the zone, he’s got to be able to find the pockets of it,” LSU coach Johnny Jones said. “He’s got to be able to create opportunities for his teammates or make plays from there, and we didn’t do a good enough job of that down the stretch as a team.”

LSU, which shot 51.6 percent from the field in the first half, rode Blakeney’s hot hand to a 47-44 halftime lead. Blakeney hit five of his first six shots on the way to 22 first-half points but only got up five shots in the second half as the Tigers cooled off to 28 percent after halftime.

“This game was very, very important for us to try to build some momentum because our next two are on the road.”