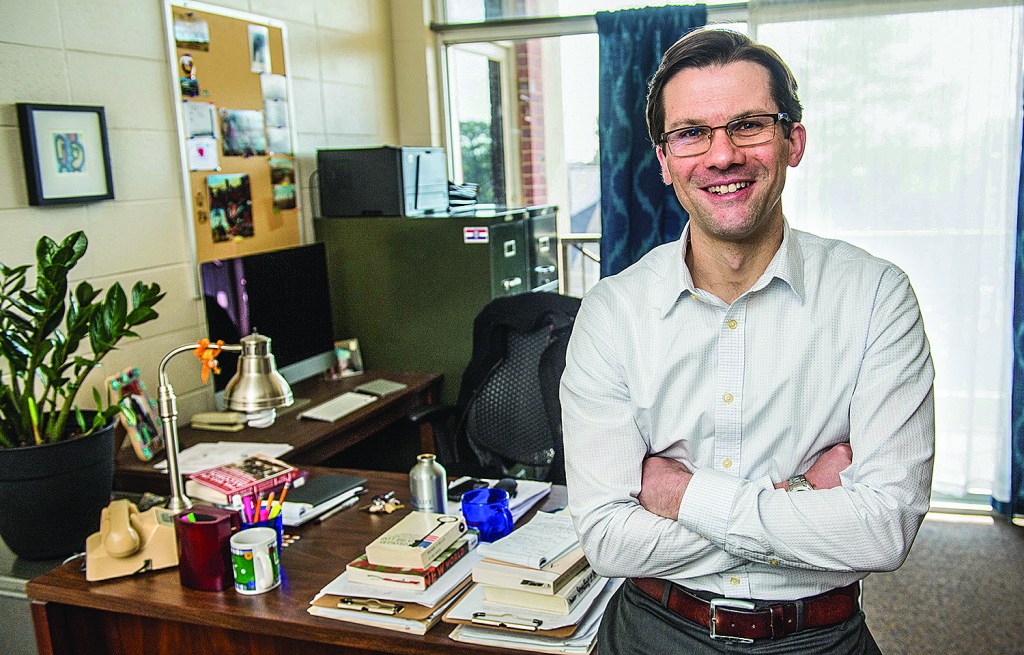 Jarod Roll, history professor, is the recipient of a National Endowment for the Humanities fellowship, the first for Ole Miss in 25 years. Photo by Kevin Bain/Ole Miss Communications

Jarod Roll, associate professor of history at the University of Mississippi, has been awarded a coveted fellowship by the National Endowment for the Humanities.

The yearlong fellowship allows scholars in the humanities to focus solely on their research or writing. Of the 1,298 scholars who applied for the 2017 fellowship, only 86 – less than 7 percent – were chosen for the award. Roll, a highly regarded historian of modern America with a focus on labor in U.S. history, joined the faculty in the Arch Dalrymple III Department of History in 2014.

He plans to use his fellowship, which begins in August, to complete a book project, tentatively titled “American Metal Miners and the Lure of Capitalism 1850-1950.” Roll is exploring the history of the white working-class anti-unionism and conservatism movements in the Tri-State Mining District of Kansas, Missouri and Oklahoma, a region that was national leader in the production of zinc and lead.

“Unlike miners elsewhere in the United States, the Tri-State miners resisted unionization and government reforms for over a century,” he said. “I am particularly interested in how their ideas about capitalism, as well as ethnicity and gender, influenced these views.

“Scholars in my field of labor history have not given much attention to workers who opposed unions, particularly over an extended period. My research fills that gap. It’s important, I think, to understand that white working-class conservatism is not a recent development, as some commentators would have it, but rather a subject with a deep history that we can trace back into the middle of the 19th century.”

“We are very proud of Dr. Roll’s achievement and what it represents for the university’s legacy of academic excellence,” Chancellor Jeffrey Vitter said. “This fellowship is one of the most coveted and competitive awards in the humanities, and Dr. Roll’s selection by the NEH is further evidence of his standing as one of the top humanities researchers in the country.”

The honor also is important because of the role humanities play in understanding and applying arts and sciences in today’s world, said Lee Cohen, dean of the UM College of Liberal Arts.

“Research in the humanities helps us not only to contextualize development in the sciences, innovations in technology and advances in medicine, it offers us an opportunity to recognize that the work being done on campus by our faculty has a broad reach, beyond the laboratory, beyond the studies and beyond the classroom,” Cohen said.

“This work influences how we understand ourselves in very real, very tangible ways that impact our everyday lives. Dr. Roll being chosen for this well-regarded NEH fellowship indicates that his work is being recognized at the highest level, which is consistent with an R1 institution.”

Created in 1965 as an independent federal agency, the National Endowment for the Humanities supports research and learning in history, literature, philosophy and other areas of the humanities by funding selected peer-reviewed proposals from around the nation.

“NEH provides support for projects across America that preserve our heritage, promote scholarly discoveries and make the best of America’s humanities ideas available to all Americans,” said William D. Adams, NEH chairman. “We are proud to announce this latest group of grantees who, through their projects and research, will bring valuable lessons of history and culture to Americans.”